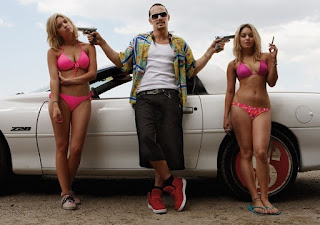 Written and directed by Harmony Korine, Spring Breakers is the story of four college girls who embark into a world of crime where they later meet a drug dealer who takes them in as part of his gang where it leads to all sorts of trouble. The film is a look into the world of spring break celebrations in college as well as the subculture of drugs and crime where four girls decide to be part of this world that is filled with chaos and terror. Starring James Franco, Vanessa Hudgens, Ashley Benson, Selena Gomez, Rachel Korine, and Gucci Mane. Spring Breakers is a riveting and evocative film from Harmony Korine.

The film is the simple story of a group of college girls who want to go to South Florida to do spring break where they venture into the world of crime and later meet up with a drug dealer who become part of his gang in a world full of debauchery and terror. While it is a film that does have a traditional narrative structure, it is more about the myth of spring break parties for college students and young people going there in need of a break from education and being at home where they want to get drunk, do drugs, and have a good time. It also explores what some are willing to go through to enjoy themselves where three of the four girls would venture into crime and later associate themselves with this charismatic drug dealer named Alien (James Franco) who offers them a chance at this life of drugs, money, guns, booze, and all sorts of crazy shit. Korine would also explore that sense of intrigue in the young women as two of them in Brit (Ashley Benson) and Candy (Vanessa Hudgens) are fascinated by that sense of danger as it is this break from the monotony of college.

Korine’s direction is definitely mesmerizing not just in the way he captures that air of decadence that goes on in these spring break parties but also in that sense of danger that occurs throughout the film. Shot largely on location in St. Petersburg, Florida and other parts of South Florida, the film does have this sense of a world that is unique where it is about the beaches, speedboats, sunny hotels/motels, the strip clubs, and all of these places that makes part of the American South so vibrant and exciting. Yet, there is also the world of the college campuses that are quite typical as it represents the opposite of what these girls want to go through but there is also a spiritual element in the film as it relates to the character Faith (Selena Gomez) who is first seen at a Bible study as she’s confused about going on the trip as she’s kind of the film’s conscience. Her character drink and smoke in the debauchery but when she and her friends are sent to jail, the reality starts to seep in where it would be overwhelming.

The direction is filled with some dazzling compositions in the usage of close-ups, medium shots, and wide shots as well as go for different types of film and digital stock including the old video camera for some of the party scenes. It says a lot to the decadence but it also displays elements that might seem as sexist where there are moments where young women expose themselves in many ways while Korine would do a tracking shot where the camera is following a couple of girls by focusing on their butts. It does add to the idea of the male fantasy in the idea of bikini girls with machine guns is something a guy would want to see but he does it in a visual style that is quite entrancing while emphasizing on repeated images that play into the joy of spring break parties. Korine would also create compositions that would help say a lot by doing very little as it does express that sense that spring break is fleeting though the girls wish it would be forever. Especially as the third act does go into very dark territory filled with violence and decadence with elements of non-linear narrative that either provides a sense of foreshadowing or the aftermath of what these girls would encounter. Overall, Korine crafts a ravishing and gripping film about four girls going to spring break and meet a charming drug dealer.

Cinematographer Benoit Debie does phenomenal work with the film‘s cinematography with its array of colors and lighting to play into the scenes set at night while the usage of neon lights in the way bikinis look or what a room looks like at night are just among some of the most gorgeous images captured on film as it is a major highlight of the film. Editor Douglas Crise does brilliant work with the editing with its stylish usage of montages, jump-cuts, slow-motion cuts, and non-linear editing as it does a lot to flesh out the story. Production designer Elliott Hostetter, with set decorator Adam Willis and art director Almitra Corey, does excellent work with the look of Alien‘s home with all of its guns, drugs, and other things that is typical of what dealers and gangsters are but yet it also sort of makes fun of the idea of the modern gangster. Costume designer Heidi Bivens does fantastic work with the costumes from the bikinis and shorts the girls wear to the lavish clothes of Alien.

Hair/makeup artist Nana Fischer does terrific work with the look of Alien from his dreadlocks to the tattoos in his body as well as his metallic teeth. Visual effects supervisor Chris Woods does nice work with some of the film‘s minimal visual effects for some of the scenes shot on digital video as it plays into the surreal textures in the camera work. Sound designer Adam Glascock and co-sound editor Byron Wilson do superb work with the sound with its mixing in the way the parties sound in and out of the room as well as the editing as it relates to some of the voiceover work of the characters in the film. The film’s music of Skrillex and Cliff Martinez do incredible work with the music with the former providing some rhythmic electronic music with his dubstep sound and some fuzzy electronics while the latter would bring some ambient textures into the score. Music supervisors Randall Poster and Brandon Thompson do wonderful work with the film’s music soundtrack that includes a range of music from pop, hip-hop, and electronic music by Britney Spears, Birdy Nam Nam, Waka Flocka Flame, Gucci Mane, and Ellie Goulding.

The casting by Laray Mayfield is excellent for the ensemble that is created as it features some notable small performances from professional wrestler Jeff Jarrett as a preacher in a Bible study meeting, Sidney and Thurman Sewell as themselves as they’re called the ATL Twins, and Gucci Mane as Alien’s former friend/mentor and now rival Big Arch. Rachel Korine is fantastic as Cotty as one of the four girls who joins in the adventure as she helps Brit and Candy in their schemes while getting her own taste of debauchery. Ashley Benson and Vanessa Hudgens are amazing in their respective roles as Brit and Candy as the two girls who love to drink and do drugs as their wildest of the two who become Alien’s lovers as well as their most dangerous confidants. Selena Gomez is brilliant as Faith as the youngest of the four girls as someone who joins the girl in the fun until she is arrested with her friends as well as her own encounter with Alien makes her very uncomfortable where she displays that sense of the conscience into the film. Finally, there’s James Franco in a phenomenal performance as the drug dealer Alien where Franco goes all out in the role where he displays a sense of charm and dark comic wit as it is a performance of the ages for Franco.

Spring Breakers is a spectacular film from Harmony Korine. Featuring a great cast, gorgeous cinematography by Benoit Debie, a killer soundtrack, and some dazzling technical work. The film is definitely a provocative look into the world of spring break culture and what young women are willing to do to be part of that world along with the subculture of crime. In the end, Spring Breakers is a rapturous film from Harmony Korine.

I wanted to like this so badly because everyone else did and it just didn't work for me. I did like the use of neon in the film though, it was very fitting.

This is one of my favorites of 2012 and, far as I'm concerned, Korine does the absolute best directing job of anyone that year, Oscars be damned. What he accomplishes here is amazing. Franco gives what's easily his best performance, too. What a mesmerizing film, this is.

@Brittani-I can understand why it didn't work for everyone but I was engaged by the visuals and what Korine was trying to do as it ended up being much better than I thought it would be.

@Wendell-This was a real surprise although I'm not sure if this is the best film that Korine did as I still favor his earlier work like Gummo and Julien-Donkey Boy. Still, it is fucking incredible and I really hope his next film does come out. Yet, I would describe this film as Gaspar Noe meets Terrence Malick on Spring Break and this is what I think would be the outcome.

I didn't bond with this one either. I really don't get the appeal,and reviews like yours kept me wondering if we were all watching the same movie!

@assholeswatchingmovies.com-Maybe it's in the interpretation of things which is probably why the opinions for this film are polarizing.

Completely agree with this review. This is still one of my favorites films so far this decade. It's cinematography has been such an influence on my own filmmaking. Love it.