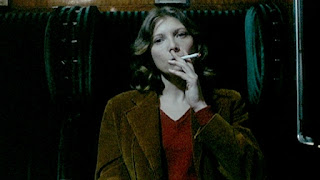 Written and directed by Chantal Akerman, Les Rendez-vous d’Anna (The Meetings of Anna) is the story of a filmmaker traveling through Europe to promote her film as she meets various people during her journey. The film is a character study in which a woman doesn’t just deal with being on the road but also the encounters she has in her travels as she copes with isolation from her surroundings. Starring Aurore Clement, Helmut Griem, Magali Noel, Hans Zischler, Lea Massari, and Jean-Pierre Cassel. Les Rendez-vous d’Anna is a mesmerizing and provocative film from Chantal Akerman.

Told in nearly the span of 72 hours from Cologne to Paris, the film revolves around the travels of a filmmaker who is promoting her film as she copes with the growing detachment of her surroundings as well as the people she meets along the way. It’s a film that explores a woman dealing with the role she is in as she ponders about the world she left behind she makes a brief visit to Brussels to see her mother and then return home. Along the way, she meets a family friend, a stranger on a train, and two men whom she would sleep with as it adds to this growing sense of detachment towards the people around her.

Chantal Akerman’s script does have a traditional structure as the first act is set in Cologne, West Germany while the second act is set partially on the train as well as its train stops including one at Brussels, and the third set in Paris. Yet, it is more about the study of its protagonist Anna Silver (Aurore Clement) who deals with traveling constantly and the demands to show her film to the world where she feels lost in her travels. Though the script features a lot of monologues from characters that Anna meets, it is largely minimalist in terms of its settings and refusal to dwell into conventional plot-points in favor of dwelling on Anna’s actions and her reaction to the news along with her recollections in her travels.

Akerman’s direction is very intoxicating for the way she doesn’t just capture that sense of detachment between a woman and her surroundings but also in the way she creates these gorgeous compositions to play that sense of detachment. Since the film features very little close-ups in favor of wide and medium shots, Akerman finds way to compose these images with something that feels ordinary but has something that feels very engaging. Even in the way she would put her actors into a frame whether they’re looking outside of a hotel room or have a conversation outside of one’s house. It says so much by doing so little into exploring Anna’s detachment as it would include these wide shots of the train stop interiors where she would meet her mother (Lea Massari) and a family friend in Ida (Magali Noel). Akerman does go for a few dolly-tracking shot for some of the movements that occur in the film though much of it straightforward where it’s not about camera pans or angles.

Instead, Akerman is just about that that direct image into the way she creates these compositions as the wide shots are lined-up in the middle of train stop staircase or a ticket booth in a train station. It has this air of simplicity into the direction while proving that these scenes just need sound and a visual without the usage of heavy dialogue as these quieter moments in the film are just as entrancing as the ones that features lots of dialogues and monologues. The scenes set in the train showcase that growing sense of isolation and detachment where Anna would walk through train compartments where one compartment is cramped with a lot of people forcing her to go back to another where it seems like she’s reluctant to even want to connect with a bunch of people but rather this one person on his way to Paris. It has something that does feel very European not just visually but also in its tone where it is a world that is changing but in ways that has Anna feel detached from as it relates to her own sense of loneliness. Overall, Akerman creates an evocative and captivating film about a woman’s journey through Europe.

Cinematographer Jean Penzer does brilliant work with the film‘s cinematography from the low-key yet colorful look of many of the daytime exteriors to the naturalistic lighting for scenes set at night including the stylish lights in the train stops and inside the train. Editor Francine Sandberg does excellent work with the editing where it is quite straightforward with some jump-cuts in some parts while letting scenes play out in their long takes. Production designer Philippe Graf does fantastic work with the look of the hotel rooms that Anna would stay in throughout her journey. The sound work of Henri Morelle is amazing for how natural it sounds as well as capturing everything that is heard including whatever music is playing in the radios.

The film’s small yet superb cast includes Hans Zischler as a man Anna converses with on the train to Brussels and Jean-Pierre Cassel as her Parisian lover Daniel who copes with the unhappiness of his work. Magali Noel is wonderful as a family friend in Ida whom Anna is fond of as Ida tells her that her son is the right person for her despite Anna’s own uncertainty while Lea Massari is fantastic as Anna’s mother who reveals into a lot of things that is happening in Brussels as well as things involving the family. Helmut Greim is excellent as Heinrich as a German Anna meets early in the film as he sleeps with her and later invites her to his home where he frets over the changes of the world. Finally, there’s Aurore Clement in an incredible performance as Anna Silver as this filmmaker who is going on a road trip to promote her film as she deals with her growing isolation and detachment in her surroundings and encounter with people where it’s a very restrained performance for much of the film with one key moment she sings a song to Daniel.

As part of the 2010 Eclipse box set series of Chantal Akerman’s work in the 1970s from the Criterion Collection, the film features an essay about the film entitled Meetings with Chantal by essayist Michael Koresky. The essay discusses not just the period of where Akerman was when she was making the film but also the backlash she received from feminists for working with a male crew though Akerman never claimed to be a feminist. What Akerman wanted to do was play into that sense of longing and loneliness into the character of Anna while the film did sort of serve as the antithesis of sorts to her previous feature film in Jeanne Dielman, 23 Quai du Commerce, 1080 Bruxelles which she claimed was never meant to be a political nor a feminist film. Instead, the film would reflect on a period in her career where she would become nomadic in her travels while still longing to return home to her native Belgium as it’s a fascinating essay by Koresky.

Les Rendez-vous d’Anna is a phenomenal film from Chantal Akerman that features a magnificent performance from Aurore Clement. Not only is the film a compelling character study with these evocative themes of isolation and detachment. It’s also a film that explores the travels of a woman and her need to wanting to connect but feel lost in her surroundings. In the end, Les Rendez-vous d’Anna is a spectacular film from Chantal Akerman.

This sounds really good! I hadn't seen any Chantal Akerman film before but somehow she sounds so familiar. I like the premise and the fact that it takes place over the course of a few days. The France scenery is always a plus in my book!

The one film of Akerman I would start with is Jeanne Dielman which is considered one of the pillars of great 1970s European cinema. I have one more film of Akerman's that I have as part of the Eclipse box set of her work in the 70s but I'm holding that one for June. This one was a real surprise as I just got sucked into what I was seeing. Plus, if you see this one and Jeanne Dielman, you'll likely get an idea of where Sofia Coppola got some of her visual ideas.

I just looked up Jeanne Dielman, sounds intriguing but the premise of this one appeals to me more. Sofia Coppola's films look heavily-influenced by European cinema, so that doesn't surprise me.

@ruth-Somewhere is the best example of that European style that Coppola has infused into her work as it has elements of Antonioni, Fellini, and Akerman but also has elements of herself that is very personal which makes that film more special. Jeanne Dielman might be challenging as it's over 3 hours but it's really unlike anything and still has the power to be shocking and full of wonderment.