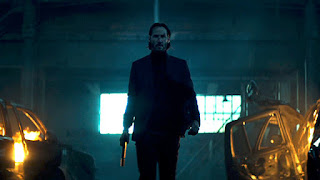 Directed by Chad Stahelski and David Leitch and written by Derek Kolstad, John Wick is the story of a former hitman who goes on a journey of vengeance following an attack of his home which led to the death of his puppy given to him by his late wife. The film is a simple tale of vengeance that plays into a man who was just trying to get his life back on track only to go all-out on those that made him mad as Keanu Reeves play the titular role. Also starring Michael Nyqvist, Alfie Allen, Adrianne Palicki, Bridget Moynahan, John Leguizamo, Ian McShane, Dean Winters, and Willem Dafoe. John Wick is a thrilling and mesmerizing film from Chad Stahelski and David Leitch.

What happens when a former hitman consumed with grief over the loss of wife and then has his dog killed by a mob boss’ son who would also steal his 1969 Ford Mustang? Well, if that man is John Wick. It will take an army to stop a monster that just woke up and is in the kind of pain that no one wants to endure. While it is a simple revenge film of sorts, it’s really about a man that is coping with loss as he had spent years trying to clean up his life and not kill for anyone in the world of crime. The loss of his wife would have a major impact on him as the final gift she gave him was a puppy as it was that glimpse of hope that he wouldn’t have to grieve alone. Instead, the son of a mob boss he used to work for would fuck things up not just for himself but his father who realizes that he’s absolutely fucked.

Derek Kolstad’s script doesn’t just explore a man’s grief as he goes into a quest for vengeance but also a look into a past he had tried to walk away from as it’s one that is cold and violent but has changed into something that is more civil but with those who lack ethics. Wick is a man of the old school as his old boss Viggo Tarasov (Michael Nyqvist) describes him as someone that kills the Boogeyman. In some ways, Wick is a monster that had been tamed into a human being through his wife where he didn’t have to think about killing or be part of a crime world. Due to the actions of Viggo’s son Iosev (Alfie Allen), Wick is forced to go back into the world he wanted to leave where he is aware that there’s a bounty on his head but he is carrying a lot of pain in him as it makes him unstoppable. Wounding him just slows him down as he’s focused on vengeance as Kolstad’s script is aware of the rules but also into the fact that some just don’t grief is something not easily curable.

The film’s direction by Chad Stahelski and David Leitch is quite stylish in a lot of respects where much of the visuals and compositions definitely owe a lot to film noir. Shot largely on location in New York City and New Jersey, the film does take its time to flesh things out where it does open with a wounded Wick crashing a SUV as he struggles to get help while he looks into his phone that contains a video of his late wife. It establishes what kind of man he is as well as the fact that for all of his actions as a hitman and doing all sorts of things. There is good in him and losing the one person that humanized him is hurtful where the direction knows where to place the camera and not go for anything conventional in terms of the compositions such as how the camera is lined-up against the actor in a frame. The usage of wide and medium shots don’t just help capture the atmosphere of some of the locations including a few clubs and places that Viggo runs but also in the usage of close-ups where some of the dramatic tension occurs that include a meeting between Wick and Viggo. The film’s climax is quite elaborate as it isn’t just a thirst of vengeance but also a showdown in the old ways where the usage of wide shots and close-ups really come into play. Overall, Stahelski and Letich creates an exhilarating and gripping film about a former hitman on a quest for vengeance.

Cinematographer Jonathan Sela does excellent work with the film‘s stylish cinematography with its usage of lights for many of the interior settings at night including the clubs as well as some of the warehouses in the way it uses filters to set a mood. Editor Elisabet Ronalds does nice work with the editing with its usage of montages but also in creating a sense of tension in the way the suspense is built along with dazzling fast-cuts to play into the intensity of the action. Production designer Dan Leigh, with set decorator Susan Bode and art director C.J. Simpson, does fantastic work with the look of the nightclub that Viggo owns as well as the other places as well along with the look of Wick‘s home. Costume designer Luca Mosca does wonderful work with the costumes from the suits the men wear to the look of a female assassin Wick doesn’t like.

Visual effects supervisor Jake Braver does terrific work with some of the visual effects where it has elements of set-dressing as well as moments for the film‘s intense and elaborate action scenes. Sound designer Alan Rankin and sound editor Mark Stoeckinger do amazing work with the sound in capturing the atmosphere of the locations and the impact of the violence that adds to the intensity of the film. The film’s music by Tyler Bates and Joel J. Richards, with additional work from Scott Tixler, is superb for its mixture of eerie electronics with elements of hip-hop rhythms that play into the world of crime while music supervisor John Houlihan brings in a soundtrack that features a mixture of music from hip-hop and rock from T-Bo, the Candy Shop Boys, and Marilyn Manson.

The casting by Jessica Kelly and Suzanne Smith is incredible as it features some small yet notable appearances from David Patrick Kelly as an old cleaner friend of Wick, Randall Duk Kim as a hotel doctor, Lance Reddick as a hotel concierge, Bridget Regan as a bar mistress in Addy whom Wick knows, Kevin Nash as a club bouncer who also knows Wick, Clarke Peters as a hotel neighbor that Wick knows, and Bridget Moynahan as Wick’s late wife Helen who largely appears in flashbacks yet has this unique presence that adds to Wick’s humanity. Other noteworthy small roles include Ian McShane in a superb performance as the hotel owner Winston whom Wick knows where he would give him some keen advice while John Leguizamo is excellent in his brief role as the chop-shop owner Aurelio who realizes what Iosef had done as he would later give Wick his car back knowing that the world is about to get fucked. Dean Winters is brilliant as Viggo’s right-hand man Avi who essentially handles all of the business as he becomes worried about what Wick will undo.

Adrianne Palicki is fantastic as the assassin Perkins as a woman that has a history with Wick as she has no qualms in killing him unaware that she is way in over her head as far as Wick is concerned. Alfie Allen is amazing as Iosev Tarasov as the son of a mob boss who thinks he’s tough when he’s really just a punk-ass spoiled little shit who has no idea of who Wick is. Willem Dafoe is phenomenal as Marcus as an old-school assassin who takes the contract offered by Viggo yet is sort of this guardian angel figure for Wick as he is also the man that helped him out of the world of crime. Michael Nyqvist is remarkable as Viggo Tarasov as a mob boss who realizes what his son has done where he tries to protect him while trying to protect his empire and deal with Wick personally. Finally, there’s Keanu Reeves in a spectacular performance as the titular character as a man who is consumed by grief and rage following the loss of his wife and dog as it’s a role where Reeves doesn’t need to say much as he allows his actions and quiet demeanor do a lot of the talking as it is one of career-defining performances.

John Wick is a sensational film from Chad Stahelski and David Leitch that features an incredible leading performance from Keanu Reeves. Armed with a fascinating premise, an amazing ensemble cast, and thrilling yet violent action sequences. It’s a film that manages to be more than just a neo-noir revenge thriller but also a study of grief and loss in the eyes of a man who was just regaining his humanity. In the end, John Wick is a rapturous and exhilarating film from Chad Stahelski and David Leitch.

I love how one could argue this entire movie takes place because John Wick is pissed someone killed his dog. lol Great write up, I thought this movie was a bit ridiculous, but it was fun enough.

I could care less if it was ridiculous. I got sucked into it and it was a fucking blast. Plus, you felt for Wick because he had lost so much and you wanted him to kill that little shit and his daddy.

Wahoo! I'm glad you liked this one. I've always liked Keanu but I never thought I'd like this one as much as I did. It's ridiculous but in a good way, and the action was top notch! I can't wait for the sequel!!

@ruth-It was fun but also engaging where it didn't exactly play by the rules in some cases but wasn't afraid to be conventional. Keanu I felt is underrated and is now at a point in his career to take some risks but also do things he know he can do.

I was pleasantly surprised at how much I enjoyed this movie. The various fight scenes were brilliantly choreographed - stylish and visceral. I've always liked Keanu Reeves and I thought he did an outstanding job, here. He's an actor aware of his own limitations and really did some nice work. I am very interested to see what happens in the upcoming sequel.

@J.D. Lafrance-Keanu is one of those guys I like where if he given roles that play to his strengths as an actor. He can be great and this is an example of what happens when a film comes along and plays to that man's strength. Plus, I think Keanu has become a better actor nowadays than what he was 20 years ago. He's more confident, he doesn't take himself seriously, and knows what to do for a role.