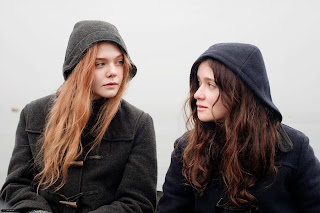 Written and directed by Sally Potter, Ginger & Rosa is the story of two young girls living in the 1960s as they cope with the threat of nuclear holocaust during the Cold War as well as a growing divergence between the two. The film is a coming of age tale set entirely in the year of 1962 Britain during the period of the Cuban Missile Crisis as a young woman fears about the concept of no future. Starring Elle Fanning, Alice Englert, Alessandro Nivola, Christina Hendricks, Timothy Spall, Oliver Platt, Jodhi May, and Annette Bening. Ginger & Rosa is a compelling and touching film from Sally Potter.

The film revolves around the lives of two 17-year old girls in 1962 Britain as they cope with the idea of nuclear holocaust as they both diverge into different paths where one of them tries to do something about it while the other falls in love. It’s a film that is a coming-of-age tale set in the backdrop of the Cuban Missile Crisis where two girls are trying to have fun but certain events in their lives would change things. While Ginger (Elle Fanning) and Rosa (Alice Englert) have many similarities in their personalities and adventures as they were both born on the same day to young mothers. The latter would find herself be drawn to Ginger’s free-spirited father Roland (Alessandro Nivola) in his views of being independent and wild as he encourages Ginger to do so. Yet, Ginger is becoming interested in poetry as she also tries to find herself through activism.

Sally Potter’s screenplay doesn’t just play into the relationship between the two girls but also the events that would drive them apart. Notably Rosa’s actions as she likes to drink and smoke while make out with boys while Ginger is confused if she wants that as she becomes more passionate about activism as well as poetry. While Rosa isn’t exactly a bad person but rather someone who does bad things, her lack of a father figure and need for one in Roland would create a schism in her friendship with Ginger who would also lash out over the state of the world. The film’s second half would have Ginger live with her father but it becomes clear that it’s not ideal where she turns to family friends including an experienced activist in Bella (Annette Bening) who knows what Ginger is dealing with but also tell her there is still a solution to the chaos of the world.

Potter’s direction is quite simple in terms of the compositions she creates yet does manage to create some dazzling visuals as it relates to the world that Ginger and Rosa are living in. Shot largely in locations near Kent in Britain, the film does play into a small-town yet post-war feel in a world that is changing but grounded as much of the film is set in a working class environment where kids are listening to jazz and rock n’ roll. While Potter uses a lot of wide shots to capture the scenes set on Roland’s boat and in some location shots, she maintains an intimacy with the medium shots and close-ups. Especially as it plays into Ginger’s own growing pains and confusion as it would culminate into the third act where she begins to realize that the world she is in as it relates to her father is just as complicated as what is happening around her. Even as Rosa becomes a more complicated person to the point that Ginger has no clue how to comprehend everything around her. Overall, Potter crafts a mesmerizing coming-of-age film about two teenage girls diverging into different paths amidst the growing threat of a nuclear holocaust.

Cinematographer Robbie Ryan does amazing work with the film‘s cinematography to create some very vibrant and colorful looks for many of the exterior scenes set in the day and night along with some low-key lighting for some of the interior scenes in the film. Editor Anders Refn does nice work with the editing as it is mostly straightforward with a few stylish bits such as an opening montage on Ginger and Rosa‘s lives as well as some scenes that play into Ginger‘s emotional turmoil. Production designer Carlos Conti, with set decorator Liz Griffiths and art director Andrea Matheson, does fantastic work with the look of Roland‘s home with its somewhat-Bohemian look that is a sharp contrast to the simplistic yet more spacious home that Ginger lives with her mother. Costume designer Holly Waddington does excellent work with the costumes with the look of early 1960s fashion including the turtleneck sweaters the girls would wear.

Hair/makeup designer Tara McDonald does terrific work with the hairstyles of Ginger and Rosa with the former having dyed red hair as well as the look of young men in Teddy-boy haircuts. Visual effects supervisor Martin Madsen does some fine work with some of the film‘s minimal visual effects which is just essentially bits of set dressing for some of the locations. Sound editor Eddie Simonsen does superb work with the sound in not just capturing some of the moments in the locations but also in the way the reports on the radio about the Cuban Missile Crisis is being presented. Music supervisor Amy Ashworth creates a wonderful soundtrack that features different kinds of music from classical, jazz, and rock n’ roll as it features contributions from Franz Schubert, Little Richard, Chubby Checker, Count Basie, Charlie Parker, Thelonious Monk, Duke Ellington, Sidney Bechet, Dave Brubeck Quartet, Miles Davis, the Shadows, Les Paul, and Django Reinhardt.

The casting by Irene Lamb and Heidi Levitt is brilliant as it features some notable small roles from Andrew Hawley as the lead activist Tony that Ginger befriends, Luke Cloud as Rosa’s father who is only seen briefly early in the film, and Jodhi May in a wonderful role as Rosa’s mother Anoushka who deals with her daughter’s behavior as well as the activities she is doing. Oliver Platt and Timothy Spall are excellent in their roles as two family friends named Mark who help Ginger in dealing with the chaos of the world as well as provide their own insight into the way things are. Annette Bening is fantastic as Bella as an activist friend of the American Mark who would help Ginger in answers about the ways of the world while calling out on some of Roland’s own bullshit idealism.

Christina Hendricks is amazing as Ginger’s mother Natalie as a former artist turned homemaker who becomes overwhelmed with her daughter’s activities and her husband’s infidelities where she struggles to maintain some sanity over what is happening in her family life. Alessandro Nivola is superb as Ginger’s father Roland who is this free-spirited pacifist who encourages his daughter to be independent and free but often does a lot of bad things as it includes sleeping with other women and students where one of them would be too much for Ginger to deal with. Alice Englert is remarkable as Rosa as a 17-year old girl who becomes more fascinated by boys rather than the reality of nuclear holocaust as she starts to dress more stylish and act a certain way where she would make Ginger feel uncomfortable. Finally, there’s Elle Fanning in an incredible performance as Ginger as a 17-year old girl dealing with the reality of what is coming as she leans towards her poetry to cope with not just that reality but also the one close by as it relates to her disintegrating friendship with Rosa and her relationship with her father.

Ginger & Rosa is a marvelous film from Sally Potter that features a mesmerizing performance from Elle Fanning. Along with a great supporting cast as well as a compelling premise that play into real world situations from the views of a young lady. It’s a coming-of-age film that plays a lot into what happens when a bomb will drop and two young girls different reaction to that reality. In the end, Ginger & Rosa is a rapturous film from Sally Potter.

When you mentioned you saw this in your comment I'm immediately intrigued by it. I had heard of it a while back but never got around to it. I didn't know it has a female director too, another reason to see it then. I do like Elle Fanning, and Alessandro Nivola is such an underrated indie actor.

Great review! This was a lovely little film, the cast was great like you pointed out.

@ruth-Sally Potter is a filmmaker I'm aware but I've only seen one of her films in Orlando that she made in 1992 with Tilda Swinton and Billy Zane as that was a long time ago. I hope to revisit that one and see everything else she's done.

@Brittani-Thank you. I thought it was really good yet Elle Fanning was just great as she, as usual, knocks it out of the park.