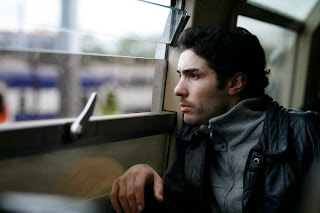 Directed by Jacques Audiard and written by Audiard, Thomas Bidegain, Abdel Raouf Dafri, and Nicolas Peufaillit. Un prophete (A Prophet) tells the story of an illiterate 19-year old French-North African man who is sent to prison for six-years. In a world where it’s racially-divided as it’s ruled by a mob, he befriends a Muslim man who helps him while creating his own empire. The film is a part coming-of-age story and part-prison drama as a young man’s life is shaped during his time. Starring Tahar Rahim, Niels Arestrup, and Abdel Bencherif. Un prophete is an eerie yet engrossing character-driven drama from Jacques Audiard.

19-year old Malik El Djebena (Tahar Rahim) is a young criminal whose life of misdemeanors has finally landed him in prison for six-years after assaulting a cop. Un-educated and not knowing much about the world except how to survive, he lives in a chaotic prison where a Corsican mob leader named Cesar Luciani (Niels Arestrup) and his henchmen rule the prison and the guards. Malik tries to survive the harsh prison as he comes across Luciani who orders him to kill a prisoner named Reyeb (Hichem Yacoubi) before he would testify in court. Malik reluctantly does so with unease while it confirms the Arabs and North African population of the group who is in charge.

Malik remains haunted by what he did to Reyeb who would often appear to him as Malik befriends a Muslim named Ryad (Abdel Bencherif). Ryad would teach Malik to read and write as Malik takes classes that allowed him to learn other languages and later, economics. With Ryad as his closest friend, he also finds his way to be close to Luciani by becoming his servant. When Luciani’s men are transferred and later released, Malik eventually becomes Luciani’s closest ally while Malik makes waves of his own. Taking a strange gypsy man named Jordi (Reda Kateb) as one of his associates, Malik also makes wave with Muslim prisoners. Becoming Luciani’s most reliable ally also helped him get out of prison for brief periods to help make deals and such.

With Ryad out of prison and trying to get his life in order, he also work out on some drug deals for Malik only to get in trouble with an Egyptian gangster named Latif (Mamadou Minte). This causes problems as tension between Malik and Luciani occur while Malik gets in contact with a man who knows a crime boss named Brahim Lattrache (Sumane Dazi). Though the flight to Marseilles wasn’t easy and Lattrache not happy about meeting Malik, the two have an understanding along with information about a snitch in Luciani’s group. Malik makes a deal with Lattrache with Luciani asking his old henchman Vettori (Jean-Philippe Ricci) to go after the mob’s Don who Luciani believes is the rat. With Malik on board along with Ryad, things become complicated due to Vettori’s lack of respect towards Malik’s men along with Ryad, who is ill due to a cancer remission. Malik realizes that he has to go on board where he makes plans that would change everything.

The film is a coming-of-age story about a man’s rise in prison during a six-year stint. Yet, what is more compelling is his development as a 19-year old illiterate prisoner into a crime boss of sorts who manages to win respect. It’s also a classic rise and fall tale for another character in Luciani who starts off as this intimidating yet intelligent boss who starts off as the man ruling the prison. Yet, by the time he lets Malik get close to him with Malik learning the ropes, his own downfall would emerge. It’s these storylines that really creates a character study that is engaging from start to finish though its approach is very unconventional.

The screenplay definitely plays off Malik’s early rise as a young prisoner to porter for Luciani. Even as Malik’s development is driven by the relationships he makes in prison. Two of them in Luciani and Ryad would be bring the most impact to Malik’s life. Luciani does treat him like a servant and almost like a son to him late in the film as he realizes he is the only one in his group that is more reliable. Even in a scene as he wonders why Malik still makes coffee for him after all of these years as Malik has no answer. Then, there’s Ryad who would not only teach Malik to read and write but also give him a reason to do what is right. Even as Ryad is a cancer survivor with a family who later gets a remission in cancer. This would eventually motivate Malik to do what is right for his friend and his family.

The script is very loose with its plot since there isn’t much of a plot to begin with. Even as it slowly builds up development to let the audience understand the world Malik is in. Helming all of this is director Jacques Audiard whose direction is very engaging in letting the audience be aware of the prison world in France. Audiard definitely plays with the script’s loose style by letting scenes unfold and let things play out. While it does create scenes that are very slow and long, particularly for a film with a near two-and-a-half-hour running time. Audiard does that so he can help the audience understand what is going on during Malik’s first year for about thirty minutes into the film. Then play it all out for the rest of his time in his stay.

Audiard also creates some stylistic approaches for several scenes including some slow-motion shots in a few parts. Notably the scene where Malik goes after a crime boss that is presented with great style. Another stylistic element to the film that plays off to Malik’s own sense of guilt is the appearances of Reyeb as he’s often shown with cuts on his neck or something happening to him as he serves as a reminder of what Malik has done. Audiard’s overall direction is truly powerful as he creates a mesmerizing yet haunting prison-drama that plays with its conventional storyline and more.

Cinematographer Stephane Fontaine does an excellent job with the film‘s cinematography in creating an eerie yet claustrophobic look to the scenes inside the prison. While even adding some beauty for scenes outside of the prison including a gorgeous scene during the winter. Fontaine also succeeds in creating lush images for scenes in Marseilles and Paris to play up to Malik’s own brief tastes of freedom. Editor Juliette Welfling does a phenomenal job with the film’s editing in creating tension between characters as well as building the momentum for Malik’s development. Notably in scenes where there’s a mesh of shimmering cuts to play up to Malik’s sense of dread. Welfing’s editing is definitely the technical highlight of the film for the way it underplays the drama and its stylized approach to Malik on the job.

Production designer Michel Barthelemy, along with set decorator Boris Piot and art director Entienne Rohde, does a wonderful job with the look of the prison cells as they have a look that is very small and claustrophobic. The halls have more space and are much cleaner while other places such as Ryad’s home and places that Malik encounters reveal his taste for freedom Costume designer Virginie Montel does a good job with the costumes by most playing casual for the prisoners while the Luciani characters wears more finer clothes to display his personality.

Sound editors Stephane Rabeau and Francis Wargnier do some stellar work with the sound in playing up to the tense and chaotic atmosphere to the prison as the quieter moments even has something that is disturbing. Even as the sound work is much broader and more eerie for some of the film’s violent moments. The music by Alexandre Desplat is a real highlight of the film as it mostly plays as a haunting yet subtle accompaniment throughout the film. While he does bring in a few orchestral pieces to the film, it’s mostly in small moments as he goes for longer yet ambient-like tracks to play to Malik’s state of mind. Even as the film’s soundtrack features an array of artists ranging from Nas, Sigur Ros, and Jimmie Dale Gilmore.

The casting by Richard Rousseau is definitely superb with its array of people to play small and big roles. Even as the extras in the prison scenes are former convicts who helped provide a sense of realism to the film. In small but memorable performances, there are Jean-Emmanuel Pagni as a henchman of Luciani who helps Malik in how to be a porter, Mamadou Minte as the Egyptian gangster Latif, Cindy Daniel as a hooker Malik has sex with, Frederic Graziani as a detention chief, Reda Kateb as Malik’s contact man Jordi, Sumane Dazi as the crime boss Lattrache, and Leila Bekhti as Ryad’s wife Djamila whom Malik wants to help in her time of need.

Jean-Philippe Ricci is very good as Luciani’s main henchman Vettori who is never kind to Malik because of his race while proving to be very un-loyal when he had to work with Malik. Hichem Yacoubi is excellent as Reyeb, the man Malik kills early in the film only to be a ghost who offers him ways to improve himself as his appearances are truly mesmerizing. Abdel Bencherif is superb as Ryad, the man who would help Malik become the crime lord while reminding him about the fact that he needs to be a good man and do the right thing. Niels Arestrup is phenomenal as Cesar Luciani, a crime boss who has an intimidating presence while showing Malik the ropes about being a criminal as he later treats him like a son.

Finally, there’s Tahar Rahim in a magnificent performance as Malik El Djebena. Rahim brings a gritty yet charismatic performance as a young man who starts off as a quiet loner into a powerful yet take-charge kind of guy. It’s a stunning yet hypnotic performance from the young actor as he goes for it all whether its in quiet moments or being the guy in the background as he observes everything around him. Even as he is someone taking charge and looking cool in the process. This is definitely one of the great performances of 2009.

Un prophete is a brilliant yet eerie film from Jacques Audiard that features an amazing performance from Tahar Rahim. Audiences of prison dramas will no doubt enjoy this film for its character study as well as its more intimate yet engaging approach to the world of French prisons. Particularly with its idea of crime and the way things work in prisons along with how they do things on the outside. In the end, Un prophete is a mesmerizing film from Jacques Audiard.

Jacques Audiard Films: (See How They Fall) - (A Self Made Hero) - (Sur mes levres) - (The Beat That My Heart Skipped) - Rust and Bone