Originally Written and Posted at Epinions.com on 2/19/04 w/ Extensive Revisions. 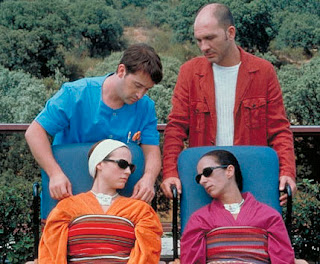 One of the most enduring and seminal figures in post-Franco Spanish filmmaking, Pedro Almodovar has always been considered one of the greatest international filmmakers of the past 25 years. His offbeat, energetic, and provocative films with colorful textures made him standout among his peers in his native Spain and Europe. From comedies like Women on the Verge of a Nervous Breakdown to sex films like Tie Me Up! Tie Me Down! and High Heels. Almodovar also explored different genres in the elements of drama and family with films like Kika, The Flower of My Secret, Live Flesh, and All About My Mother. The success of Almodovar's film not only reached a wide international audience around the world but also became a cult figure to American film critics, moviegoers, actors, and filmmakers who often cited his work as profound and intriguing, particularly since most of his subjects were about women. In 2002, Almodovar decided to shift gears a bit to explore the relationships of straight men caring for the women they love who are both comatose due to tragedies in the film Talk to Her (Hable con Ella).

Written and directed by Almodovar, the film carries the offbeat tone of his earlier work while channeling the richness and textures of modern Spain. Easily categorized as a drama, Almodovar plays with structures with elements of flashbacks and ambiguous storylines about the film's central male characters. Along the way, Almodovar pays tribute to the age of Silent films while giving the film's moments and characters are linear to Almdovar's Oscar-award winning screenplay. With a cast that includes Javier Camara, Dario Grandinetti, Rosario Flores, Leonor Watling, and Geraldine Chaplin, Talk to Her is one of Pedro Almodovar's richest and mesmerizing films to date.

Two men are watching a ballet as they're both moved by what they're watching as neither knew each other.  One of them is a male nurse named Benigno Martin (Javier Camara) who spends his life taking care of a young, beautiful woman named Alicia (Leonor Watling).  Alicia has been comatose for four years following an accident as talks to her about the ballet and the man he was sitting with.  The other man is a journalist named Marcos Zuluaga (Dario Grandinetti) who is working on a profile on a female bullfighter named Lydia (Rosario Flores) for his Argentinian newspaper.  They meet where they start a relationship where it goes well until a fateful moment would have Lydia in a coma during a bullfight.

During Lydia's hospitalization, Marcos meets Benigno whom he recognized from the ballet as he wonders about the way Benigno cares for Alicia.  Benigno suggests that Marcos should still talk to Lydia despite her comatose state as a friendship grew.  The two men reflect on their lives as Benigno reveals he met Alicia years ago when she practiced ballet in a building across from where he lived.  Wanting to meet her, he learns that her father (Helio Pedregal) is a therapist as he decides to meet him pretending he needed a session.  After learning about her accident, he decides to take care of her while befriending her teacher Katerina Boliva (Geraldine Chaplin).  Marcos is intrigued by the story as he reveals his own issues with Lydia due to the fact that he was trying to get over a previous relationship with a woman named Angela (Elena Ayana).

With Benigno and Marcos becoming closer as they help out their comatose women, Marco learns from Lydia's old boyfriend/bullfighter Nino de Valencia (Adolfo Fernandez) about the news Lydia wanted to tell on that terrible day.  Marcos realizes what happened as he finds himself leaning towards Alicia for company.  Benigno meanwhile, is haunted by a silent film he saw as Marco is bewildered by his strange behavior.  Even worse is when a nurse finds out that Alicia is pregnant with Benigno suspecting of raping her.  Months after the incident, Marcos learns about what happened to Benigno and Alicia along with some other news prompting him to return to Spain.  Visiting Benigno, who is now in prison, Marcos tries to comfort his friend while he learns some shocking revelations about what Benigno might have done that would eventually lead to tragedy.

The dramatic tone surrounding Talk to Her is extremely complex in its plot and characters. The genius of Almodovar's work is for the fact that he doesn't play things easy while not trying to bore anyone. This offbeat is the reason why his films are so appealing and in Talk to Her, it's no exception. The brilliance of the film is in its script as Almodovar brings flaws and human enlightenment to the characters while as a director, knows when to build up moments of suspense, comedy, and melodrama.

For that, he's a master at what he does and is one of the rare international filmmakers who consistently experiment with new ideas and rehashing old ideas to be refreshed. In the silent film sequence, Almodovar brings a sense of comedy and drama that plays well to the film without making it inconsistent or distracting. Here, he uses it as part of the story for Benigno to tell the comatose Alicia about it. It's by far an enriching story that shows Almodovar taking heavy drama with being overly-sentimental nor melodramatic.

The film's look is also exquisitely rich in its use of color and the world of Spain. Cinematographer Javier Aguirresarobe brings a look that is breathtaking not just in the countryside of Spain but the look of the hospital by making it real and clean as well as the city of Madrid and the bullfighting scenes. Along with the art direction and production design by Antxon Gomez, the film is exquisitely ravishing; even in the ballet scenes with a lovely set decoration by Federico G. Cambero as it brings up life and emotions to the film and the response from its leading characters. Helping in the presentation is longtime editor Jose Salcedo whose tight cutting and perspective is masterfully crafted. Another lovely aspect of the film is the score by Alberto Iglesias who brings in traditional, Spanish flamenco-style music to the forefront as well as an orchestra that enlightens the film's richness and tone.

The film's cast is utilized to perfection with its small standout roles for its nurses and doctors to the families of the coma victims along with appearances by Elena Ayana as Marco's ex-girlfriend, Ana Fernandez as Lydia's sister, and Paz Vega as the woman in the silent film. Of the supporting cast, no one stood out more than Geraldine Chaplin, daughter of screen legend Charlie. Chaplin goes miles away from her usual role of an English woman to play a Spanish dance instructor with such grace and poise while being sympathetic to her student and Benigno's feelings towards her. Rosario Flores' performances as Lydia is spellbinding as a headstrong woman trying to prove herself in the chauvinistic sport of bullfighting while doing a great job playing a comatose victim. Leonor Watling is enchanting as Alicia where most of the time, she plays quietly in her comatose state while she's alive in the flashback scenes, she brings a sense of innocence to her character that is missed throughout.

In the roles of the two central male performances, Javier Camara and Dario Grandinetti are brilliant in their scenes together in the respective roles. Here, we see performances of straight men at their most vulnerable and torturous. Camara's performance is extremely complex as the audience is feeling he's mentally ill for his love for Alicia although he plays the role as if we'rethinking that but there's way more to that. In the end, Camara makes the audience sympathize with his feelings and all he's really doing is taking care of the woman he loves. Grandinetti is the straighter arrow of the two bringing in a harrowing performance as Marco, a man who is guilty of his wrongdoings and love for Lydia and Alicia. Grandinetti doesn't make his character pathetic but allow himself to be extremely vulnerable in what is definitely a remarkable performance.

The Region 1 DVD of Hable con Ella presents the film 2:35:1 aspect ratio in the widescreen format in high-definition along with 5.1 Dolby Digital Surround Sound in Spanish & French along with subtitles and trailers to films from Sony Classics. The DVD also includes weblinks to the film's official website and Almodovar's own official site. The only real special feature is a commentary track from Almodovar and Geraldine Chaplin which is done in Spanish but includes subtitles. Almodovar, sporting a sore throat, discusses the themes while admitting that he's not a technical director as Chaplin recalls the film's premiere in Paris where everyone was emotionally overwhelmed as she and Jeanne Moreau got into a discussion. Overall, it's a fine DVD from the masterful Almodovar.

Talk to Her is a lush yet complex film from Pedro Almodovar with great performances from Geraldine Chaplin, Rosario Flores, Leonor Watling, Javier Camara, and Dario Grandinetti. Fans of his films will no doubt, find this to be another classic while newer fans will definitely be interested in this and look for his earlier work. Talk to Her is a film that transcends the boundaries of foreign films and it's kind of insulting to call it foreign. Really it's a film that has wide appeal regardless of language and country. It's really an international film people can relate to and the credit really goes to Pedro Almodovar for finding new ways to enlighten an audience. In the end, Talk to Her is a rich and emotional film from one of Spain's greatest filmmakers.

Pedro Almodovar Films: Pepi, Luci, Bom - Labyrinth of Passion - Dark Habits - What Have I Done to Deserve This? - Matador - Law of Desire - Women on the Verge of a Nervous Breakdown - Tie Me Up! Tie Me Down! - High Heels - Kika - The Flower of My Secret - Live Flesh - All About My Mother - Bad Education - Volver - Broken Embraces - The Skin I Live In - I'm So Excited! - Julieta - Pain & Glory - (The Human Voice (2020 short film)) - (Parallel Mothers)