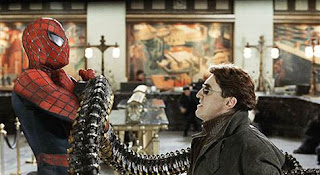 The success of Sam Raimi’s 2002 film adaptation of the famed comic book Spider-Man by Marvel Comics founder Stan Lee and Steve Ditko helped create a new wave of comic-book superhero films and franchises. While the X-Men franchise were massive hits, other comic-book adapted films like Daredevil, The Hulk, and The Punisher met with a tepid response from fans. Plus, there was high expectations for the second Spider-Man film, which after two years in production, the budget nearly reached the $200 million mark making it one of the most expensive films in history. The result though of the highly anticipated summer film proved that all that money was worth in Spider-Man 2.

While the first film was a nice introduction, the second film based on the comic book with a screen story by Alfred Gough, Miles Millar, and novelist Michael Chabon before turning it into a full script by Alvin Sargent. Directed by Sam Raimi, the second film takes place two years later where Peter Parker’s life as himself and his Spider-Man alter ego has become complicated. Not seeing his love interest Mary Jane much these days except on billboards and being estranged from best friend Harry, Peter Parker’s life is a mess. Making things worse is a scientist who descends into madness just as Parker was ready to give up the Spider-Man role before he realizes that he must be Spider-Man. Returning from the first film is Tobey Maguire in the title role along with Kirsten Dunst, James Franco, Rosemary Harris, and J.K. Simmons along with Alfred Molina in the role as the villainous Doc Ock. The end result isn’t just a film better than its predecessors but also one of the best superhero films ever made.

In the two years since he became Spider-Man, Peter Parker's life isn't going well.  Dealing with being a college student and taking minimum wage jobs to get by while still doing freelance photography for Daily Bugle chief J. Jonah Jameson (J.K. Simmons).  Parker is overwhelmed as he doesn't see his old crush Mary Jane Watson (Kirsten Dunst) around except on billboards while his friendship with Harry Osborn (James Franco) is strained due to the death of Harry's father in the hands of Spider-Man.  During a birthday party that featured Mary Jane and Harry, Peter learns that his Aunt May (Rosemary Harris) is dealing with financial problems that might lose the home she and her late husband Ben has lived in.

Harry arranges a meeting with Dr. Otto Octavius (Alfred Molina) for Peter to meet for his class as Octavius is working on a experiment to get power from the sun as a source for alternative power.  During the experiment where Octavius is attached with metal claws on his back, the experiment goes awry as fatal accidents occur along with Harry's chance to revive his father's company as he blames Spider-Man for the incident.  Octavius meanwhile, has awoken from the accident as he's become manipulated by the mechanical arms on his back as he wreaks havoc on New York City to continue his experiment.  After battling Octavius under his new name Doc Ock, Peter's life is unraveling as he's forced to see that Mary Jane is doing great as a stage actress and is getting married to Jameson's son John (Daniel Gilles).  The amount of stress has Peter choosing to stop being Spider-Man and go on with his life.

With Peter trying to get control of his personal life, Doc Ock tries to get the power source he needed for his experiment where he threatens Harry for the source.  Harry makes a deal with Ock to give him the power source in the condition to get Spider-Man.  With Peter still trying to deal with his own faltered relationship with Mary Jane as well as the guilt he had over his uncle's death, Doc Ock's threats start to emerge forcing Peter to make a choice to save those he cared for.

The film is about a young man's internal conflict into being a superhero and being himself where in the process, he has to find the balance.  Alvin Sargent's script succeeds in capturing that conflict in Peter Parker but also in the character of Otto Octavius.  A man who was trying to do good only to have an accident manipulate him into being a villain.  Sargent also gives fuller character development to Aunt May, Mary Jane, and Harry as they all deal with Peter's absence or the presence of Spider-Man.  Sargent's script is definitely phenomenal as he creates a solid story that is captured with great flair by Sam Raimi in his direction.  Filled with crazy camera angles and moments where he plays around with the superhero formula allows Raimi to bring a much looser, free-flowing film that doesn't move things too fast or too slow.  In the action, he aims for the intensity while slowing it down for dramatic moments in keeping it simple.  Overall, it's Raimi at his finest.

Complementing Raimi’s vision is cinematographer Bill Pope who really brings a vast, colorful look while being playful in more dreamier textures including a hilarious sequence of Parker walking with glasses to the tune of Raindrops Keep Falling On My Head. Pope shines in his cinematography with help from special effects supervisor John Dykstra, production designer Neil Spisak, and a team of art directors. Dykstra’s effects are far more superior in the previous films with faster movements of the characters and action sequences with Spisak bringing more ominous look to Octavius’ lab and the fast-paced editing by Bob Murawski is amazing. Helping capture the film’s action and dramatic sequences is composer Danny Elfman who brings a cinematic, sprawling string arrangement to the action scenes while adding touches of melancholia in the more dramatic scales. Unfortunately like the film’s first soundtrack, the second one doesn’t add much since the film inspires it with lame music from Dashboard Confessional, the Ataris, Maroon 5, and today’s typical pop-rock crap.

While there’s some small but hilarious cameos in the film from Stan Lee, Hal Sparks, and the always-brilliant Bruce Campbell, there’s even an appearance from Cliff Robertson as Uncle Ben along with Bill Nunn, Elizabeth Banks, and Ted Raimi as Jameson’s assistants in the Daily Bugle. Dylan Baker is excellent in his small role as Dr. Connors along with Donna Murphy as Dr. Octavius’ wife. Daniel Gilles is OK as Mary Jane's boyfriend who doesn't get a lot to do. J.K. Simmons, who serves as the comic relief, is even funnier in the first film with his calls for Spider-Man as a menace while firing/rehiring Parker throughout the film while he just brings in a bunch of laughs for the film’s action/dramatic tone. Rosemary Harris definitely has more to do in the second one as Peter’s moral guidance where she joins in the action for a bit while bringing Peter some much needed guidance in his anguishes role as Spider-Man.

James Franco’s role is a bit darker since we see him drink a bit more while having a bad obsession with killing Spider-Man. He does get a chance to pull off the mask but what is more shocking is the aftermath that will be a setup for the third film that comes out in 2007. Franco definitely brings a more intense and troubling performance as opposed to the confused nice guy in the first film. Kirsten Dunst’s role as Mary Jane in the first film doesn’t add much but in the second, she pretty much gave it more depth. She brings a sympathetic performance to her own character understanding her disappointments with Peter but she also brings a more intellectual side to Mary Jane while by the film’s final act, we begin to see the role she’s about to accept which is a bit heartbreaking yet realistic.

Alfred Molina’s role as the villainous Doc Ock definitely lives up to the hype as far as depth and magnetism is concerned. Early on, we see how likeable Octavius is in his quest to do good for mankind but when he lost everything, we see how far he descends to madness while trying to maintain whatever good is in him left. Molina is just perfect in the role without looking like a fool or someone cheesy. He’s a more superior villain than the one Willem Dafoe played as the Green Goblin. Molina is a more diverse actor in both theater and in film and the great thing about this role is not just the fact that more people will see his movies but realized how far he’s come as a great actor. Molina makes Doc Ock not just a memorable villain whose multiple arms each carry a nice personality but also a villain that will be one for the ages.

Tobey Maguire really steps up to his dual role of Peter Parker and Spider-Man by bringing a better performance than the one he did in the first film. He brings a more complex performance with his anguished personality and the sadness in the role he’s forced to play. He even manages to be believable and sympathetic in the more intense dramatic scenes while we root for him in his scenes with Dunst as the two carry amazing chemistry that is more superior to the first. We understand why he wanted Peter Parker to not play Spider-Man in order to have a life but he makes us realize that we all need heroes.

Spider-Man 2 is the best of the three films that Sam Raimi made under the franchise thanks in part to a great ensemble, an engaging screenplay, and dazzling technical work from his crew.  Fans of the film franchise will no doubt see this as the best film of the series while it's also one of Sam Raimi's best work of his glorious career.  In the end, for a film that is entertaining but also has some intelligence and characters that audiences can relate to.  Spider-Man 2 is the film to go see.