Originally Written and Posted at Epinions.com on 10/23/08. 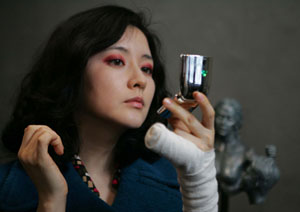 After the release of 2003's Oldboy, the film became a huge, international success as director Chan-wook Park had caught the attention of the cinematic elite. While winning the Grand Jury Prize at the 2004 Cannes Film Festival, American film director Quentin Tarantino revealed that he wanted Oldboy to win the Palme D'or that year though he and his fellow jurors at the festival ended up giving the award to Michael Moore's Fahrenheit 9/11. Oldboy was also part of a trilogy focusing on the theme of vengeance as it was preceded by Sympathy for Mr. Vengeance back in 2002. Park went back to his trilogy to conclude as his focus shifts towards a different kind of protagonist than his previous films as he switches genders from male to female. For the third and final part of trilogy, Park tells the story of a woman seeking vengeance for a crime she didn't commit entitled Chinjeolhan geumjassi (Sympathy for Lady Vengeance).

Directed by Chan-wook Park with a script co-written with Seo-Gyeong Jeong, Chinjeolhan geumjassi tells the story of a woman who had been released in prison after serving thirteen-and-a-half years for the kidnapping and murder of a young boy. Hoping to reunite with her daughter and seek a new life, the woman's taste for vengeance is huge as she hopes to find the real culprit behind the crime she didn't commit. Starring Lee Young Ae, Choi Min-sik, and Kwon Yea-young. Chinjeolhan geumjassi is a brilliant, haunting, and complex film from Chan-wook Park.

For thirteen-and-a-half years, Lee Guem-ja (Lee Young Ae) has just been released from prison for serving time for the kidnapping and murder of a young boy. Arriving out of the prison, she meets a Christian group led by a priest (Kim Byeong-ok) who believes she has reformed only to be told to go screw himself. Lee returns to Seoul where she stays with an old friend and fellow convict in Kim Yang-hee (Seo Yeong-ju). Kim recalls that Lee was an angel of sorts at the prison where her beauty and innocence captivated her fellow prisoners as she even thwarted a bully prisoner they called "the Witch" (Su-hee Go). Kim along with another convict helps Lee plan her revenge on the man that she went to prison for named Mr. Baek (Choi Min-sik). Lee's generosity in beating a bullying prisoner, saving other prisoners by giving one of them a kidney, and such has made her fellow prisoner friends to return a favor.

Working at a bakery with a young man named Guen-shik (Kim Shi-hu), Lee has an encounter with Detective Choi (Nam Il-wu). Choi recalls that Lee's false confession was only done because she wanted to protect her newborn baby from the real kidnapper, Mr. Baek. Her baby named Jenny (Kwon Yea-young), is now 13 and lives in Australia with adoptive parents (Tony Barry & Anne Cordiner). Jenny doesn't speak much Korean as Lee tries to connect with her daughter as they return to Seoul where Lee gets contact with a former convict named Park Yi-jeong (Lee Seung-Shin), who is the wife of Mr. Baek. Yet, Mr. Baek receives information of Lee's plans from the priest as he hires thugs to stop.

Instead, the plan backfires when his wife drugs his dinner as Lee confronts the man who took thirteen-and-a-half years of her life. During this confrontation, she learns a horrifying discovery that his murder of the boy wasn't just some one-time incident. With help from Detective Choi, she uncovers something even worse. The discovery forces Lee to realize that justice for herself isn't enough as it involves many other people who help her decide about their own thirst for justice.

What sets this film apart from its predecessors in the Vengeance Trilogy isn't just the fact that it's led by a female protagonist nor the film is about justice over something done wrong. The film is more about a woman who was known for her purity as she changes into an avenging angel with red eye shadow and wearing red high heels. What it's really about is a woman trying to take back the years that she lost as well as avenging the death of a boy she didn't kill yet was part of the crime for getting involved with Mr. Baek. Yet she's ravaged with guilt for making this happen where in one scene, she cuts off one of her fingers as punishment over the death of this boy. The guilt isn't just over the boy's death but the fact that she never got to know her daughter just after she was born.

Lee's guilt over the boy's death and the years loss in not knowing her daughter is what drives Lee's thirst for revenge against Mr. Baek. Yet, what is revealed in the third about Mr. Baek through a simple object is more shocking. Yet, it begins to raise more question about a man's crime as if Park asks a question to his audience. What would you do if you just learned that some man killed your child and what would you do to that person? Park's script raises that question while its aftermath reveals something that is spiritual as well as comforting where Lee begins to wonder her own new chapter in her life.

Park's direction is as potent as it was in his previous film where he takes on more stylistic choices as well as compositions. While his approach to violence is still extreme and not for the faint of heart, he takes on a more cinematic approach to the film. With uses of stylish editing, grainy camera footage, and gorgeous compositions. Park's directing shows him getting more confident in his choices while creating moments of suspense and elements of fantasy for comical and dramatic reasons. Yet, Park's emphasis to tell a story comes first rather than going for style as he raises more question about vengeance and justice while revealing the outcome of what happens. The result is Chan-wook Park reaching out to new maturity in his direction and his work as a storyteller.

Cinematographer Jeong-hun Jeong creates amazing lighting set-ups for the film's nighttime, exterior scenes. Notably the scene where two hired thugs try to jump Lee and Jenny. Other exterior shots like the yellowish, sunny Australia sequence as well as the Korean snow scenes are wonderfully exquisite. The interior sequences, notably in the film's final act, is wonderfully lit to convey a mood and style that plays true with the film in its current tone. Editors Jae-beom Kim and Sang-Beom Kim do great work with the use of jump-cuts, split screens, smooth transitions, and other styles of edits to create a film that keeps on bringing surprises with its cuts. The pacing is a bit slow yet works to convey the build-up of what's to come as it works in order to tell the story.

Production designer Hwa-seong Jo along with set decorator In-ho Oh and art directors Hyeon-Seok Choi and Ji-hyeong Han do great work in the look of the apartment that Lee stays along with her bakery and the place where she imprisons Mr. Baek. Costume designer Sang-gyeong Jo does amazing work in the look of Lee's clothing from her light-colored prison garb that she wears to the black coats and red heels that she wears on her quest for vengeance. Sound designers Chang-seop Kim, Seok-weon Kim, and Seung-cheol Lee do great work in the film's sound with the use of gunshots, objects, and other things to help convey the surrounding atmosphere Lee is in. Visual effects supervisor Jeon-hyeong Lee does excellent work in the film's visual work including some fantasy sequences involving the snow and such. Music composers Seung-hyun Choi, Yeong-wook Jo, and Seok-joo Na do great work with the film's score filled with sweeping and somber orchestral arrangements to convey the moods of Lee and her quest.

The film's cast is truly superb with small appearances from actors from the previous parts of Park's Vengeance trilogy like Hye-jeong Kang of Oldboy as a TV announcer and as the role of Baek's hired thugs, Kang-ho Song and Ha-kyun Shin from Sympathy for Mr. Vengeance. Other small roles like Su-hee Go as the Witch, Seo Yeong-ju and Kim Bu-seon as two of Lee's former prison mates are great while Lee Seung-Shin is also great as a fellow prisoner who turns out to be Baek's wife. Tony Barry and Anne Cordiner are fine as Jenny's adoptive parents who turn out to be good people while Kim Byeong-ok is devilishly good as the eccentric priest who spies on Lee. Kim Shi-hu is very good as Lee's co-worker at the bakery whom she has a brief affair with while Nam Il-wu is brilliant as Detective Choi who decides to help out Lee in her investigation over the crime she didn't commit.

Kwon Yea-young is wonderful as Jenny, the young girl who just realized that she has a mother while wondering why Lee was never there for her. Kwon's sense of innocence is matched with Lee Young Ae's subtle performance as it adds a touch of hope to the film. Choi Min-sik of Oldboy is brilliant as the evil Mr. Baek, a man who doesn't have the look of a criminal but his actions make him more intriguing. Min-sik's performance is great for his subtlety where he seems to act and look normal until he's captured where he seems on the brink of losing it. The film's best performance is easily Lee Young Ae as Lee Guem-ja. Young Ae's performance is wonderfully harrowing with dabbles of humor as it's mostly dramatic. Yet, it's filled with regret and tension as Young Ae sells the despair of her character with such grace and beauty as it's truly a one of a kind performance.

While not as good as Oldboy, Chinjeolhan geumjassi is still a brilliant film from Chan-wook Park thanks to Lee Young Ae's amazing performance. While it's more accessible than Oldboy in some respects along with some strong themes, this film proves that Chan-wook Park is one of South Korea's great up-and-coming directors to break out internationally. While the violence may not be for everyone, it's definitely a film that anyone can relate to in what Park sets up. Overall as a trilogy, it's one of the most fascinating film trilogies ever created. In the end, Chinjeolhan geumjassi is a powerful film and a fitting end to the Vengeance trilogy from Chan-wook Park.

Hello, fellow LAMB. Just wanted to let you know that The LAMMYs are coming up and we are hoping for the best voter turnout for the nominations ever. Every LAMB #1-900 is eligible to vote (and to win!), and that includes you. To participate, please go to this site: http://www.misterpoll.com/polls/521956

OK. I'll do that in a couple of days. Thank you.