Originally Written and Posted at Epinions.com on 6/11/07 w/ Additional Edits. 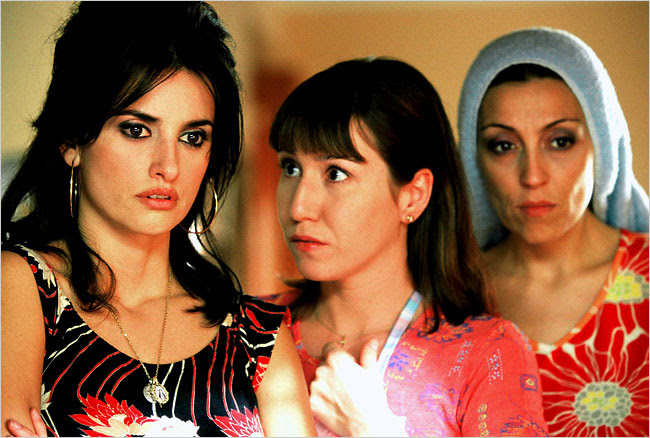 While 2004's La Mala Educacion (Bad Education) wasn't another runaway hit like previous films that Pedro Almodovar did for 1999's Todo Sobre mi Madre (All About My Mother) and 2002's Habla con Ella (Talk to Her). Almodovar still received the same worldwide acclaim that his other films did. In 2006, Almodovar reunited with not just regular Penelope Cruz but also the star of his early films in Carmen Maura for a new film that marked a return of sorts to comedy but also melodrama. First released in Spain and later around the world, Volver (To Return) marked another turning point for the director where in the U.S., a two-week national retrospective celebrating his films was widely received as everyone anticipated the release of Volver.

Written and directed by Pedro Almodovar, Volver tells the story of two sisters, and a daughter living in the city where after the sisters' mother supposedly reappears as a ghost. The two sisters try to respond with the help of an aunt and a neighbor from the village that they were born from. A film about death and family, Almodovar explores the relationship between different generation of women while reaching back to his roots in small villages. Starring Penelope Cruz, Carmen Maura, Lola Duenos, Chus Lampreave, Yohana Cobo, and Blanca Portillo. Volver is an exhilarating, provocative masterpiece from Pedro Almodovar.

It's a windy day in the land of La Mancha as two sisters Raimunda (Penelope Cruz) and Sole (Lola Duenos) along with Raimunda's daughter Paula (Yohana Cobo) are cleaning the gravestone of Paula's grandparents that included grandmother Irene (Carmen Maura). The couple died in a fire mysteriously which no one had known. After the cleaning, the three women visit their friend Agustina (Blanca Portillo) whose own mother had disappeared mysteriously around the same time Irene had died. Later that day in the villages of La Mancha, they go across from the house to visit their aging Aunt Paula (Chus Lampreave). After eating dinner with their Aunt, the trio return to their separate homes in Madrid. Raimunda and Paula live with Raimunda's husband Paco (Antonio de la Torre), who has become restless lately in losing a job and such.

Then one day, Sole gets a call that Aunt Paula has died. Sole goes to La Mancha while Raimunda and Paula tend to other issues concerning Paco. Sole visits Agustina where claims of Irene's ghost had appeared and while going to the home of Aunt Paula, Sole sees the ghost of her mother. When Raimunda returns home to help sell a restaurant by its owner Emilio (Carlos Blanco), who is going out of town, Raimunda finds Paco dead as he was killed by Paula after a molestation attempt. The death revealed claims that Paco was never Paula's father. Paula and Raimunda decide to hide the body and later, Raimunda would hide him in a freezer at the restaurant.

Upon Sole's return to La Mancha, she hears a knock from the trunk of her car which revealed to be none other than her mother. Sole, who runs a private salon business, asks her mother why she is appearing to her. Irene plans to reveal what is going on as she decides to help out Sole with her business by pretending to be a Russian immigrant. With Raimunda still trying to figure out what to do with Paco's body, a film crew is shooting nearby and looking for a restaurant to have food during filming. Raimunda decides to use the restaurant for its last days to make money with help from a few people from town. The venture becomes a success as Raimunda often gets frequent visits from Sole and vice versa. Raimunda and Paula are unaware that Irene is around. Sole later gets a call from Agustina where Agustina is falling ill from cancer. Raimunda reluctantly visits her Agustina from the hospital.

Agustina wants to know about her own mother's supposed death and some dark secrets in relation to Irene's death. Raimunda isn't sure what's going on as her concerns become about Paco. Leaving Paula to stay with her aunt Sole, Paula learns about Irene herself. When Raimunda and Sole learn that Agustina is forced to reveal secrets on TV, things start to go wrong as Raimunda finally sees Irene where the secrets about the family is revealed. With Agustina now dying, Irene, her daughters, and granddaughter decide to find a way to unveil their own faults and help out a friend.

Given the theme of death that surrounds Volver, writer/director Pedro Almodovar clearly discusses its theme and how it relates personally to a landscape like La Mancha. Yet, that isn't what the film is entirely about. It's really more about family and sisterhood. Death drives the film's complex, layered plot as Raimunda and Sole still try to figure out how their mother died or how Agustina is dealing with the fact that her mother might be dead. The film plays up to a momentum in which, the secrets are unveiled with shocking surprises and such. Through Almodovar's eerie, observant yet colorful direction, the film moves with a pacing where he lets the audience try to figure out things for themselves while see the strength of the women in the film.

It's clear that Volver is a very personal film since Almodovar was raised by a lot of women in his family, in which, they all come from La Mancha. Whereas his previous film, La Mala Educacion was another personal yet darker film about his own childhood. Volver is more optimistic since it's about the generations of women and how they deal with death and tragedy. The film is also funnier than some of Almodovar's previous films. Particularly during a scene in which, it involves something as universally funny as a fart joke. The scene reveals something that audiences can relate to in such a funny way, it could be done in any language. The fart joke.

It's Almodovar's script and his entrancing direction that gives the film a unique tone and momentum. The surprises keep on coming yet by the film's end, there's no more surprises as the audience are still in shock over what has happened. Yet, the shock is worn off over its aftermath. The film ends abruptly but it's only because there's nothing to tell that the audience already knows. Still, it works since the film and the characters allow themselves closure. Overall, it's all Almodovar and his unique approach to storytelling.

Longtime cinematographer Jose Luis Alcaine brings a lot of vibrancy and color to the film's look where the exteriors sequences in Madrid, notably a scene where a dinner for the film crew is exquisite. The scenes in La Mancha are more intimate not just in the exterior settings in the villages but also in the interior scenes. Production designer Salvador Parra and set decorator Mara Matey also plays to the film’s colorful look with great set designs on the apartments filled with wonderful colors and material. Costume designer Sabine Daigeler adds a unique touch to the film’s colorful costumes that have a casual look that audiences can enjoy while being very stylish. Longtime editor Jose Salcedo does great work in the film's editing where he uses the film's plot-momentum to build suspense with slow pacing style that works to build up the momentum. Sound recorders Jose Antonio Bermudez and Miguel Rejas do great work in capturing the differing atmospheres of La Mancha and Madrid.

Longtime score composer Alberto Iglesias brings a wonderful orchestral score along with elements of Spanish pop music including a song lip-synced by Penelope Cruz that is one of the film's great highlights. The film's music shows the diversity of Spain ranging from traditional to classical.

The film's cast is wonderful that features notably small performances from Carlos Blanco and Antonio de la Torre as the only male characters in the film. Other memorable small roles from Maria Isabel Diaz and Neus Sanz as a couple of women who help Raimunda run the restaurant. Chus Lampreave is great in her small but memorable role as Aunt Paula who is trying to remember about her late sister and her nieces when they're young. Blanco Portillo is wonderful as the dying Agustina who is haunted by the possibility of the ghost of Irene while trying to figure out about her mother's own disappearance. Yohana Cobo is really good as Raimunda's daughter who tries to deal with the idea of the death of her father and the possibility that the man isn't her father. Cobo's performance is wonderfully natural as a young woman trying to understand her own identity.

Lola Duenos is excellent as Sole, the sister who first discovers the possible spirit of Irene as she is dealing with her own loneliness. When Sole re-establishes a relationship with her mother, she tries to figure out her own flaws as her character becomes fuller as Duenas does an amazing job in playing the other sister. In her first collaboration with Almodovar since 1988's Mujeres al Borde de un Ataque de Nervios (Women on the Verge of a Nervous Breakdown), Carmen Maura gives an exhilirating performance as Irene. Maura brings a kind of maternal energy and comfort that is needed while secretly carrying her own guilt as she tries to hide the fact on why she is here. Maura’s performance is a real standout as she proves herself that she is one of Spain’s great actresses.

Penelope Cruz gives the kind of performance that isn't seen much in her American work. Instead, it's probably her best as a woman dealing with the death of her husband, running a restaurant, concealing her own secrets, and taking care of her daughter. Cruz gets to be sensual but also engaging in her performance as a woman who is trying to find good while dealing with a lot of cynicism and such. It's really Cruz at her peak as she looks comfortable in her role while proving that she a top-notch international actress.

The film was released in Spain in early 2006 to rave reviews and box office which is often expected from Almodovar. A few months later at Cannes, the film was a hit where it won the top screenplay prize for Almodovar while the film's main female ensemble shared the Best Actress prize. Released later that year in the U.S., Volver was another modest hit for Almodovar while Penelope Cruz received Best Actress nominations from both the Golden Globes and the Academy Awards.

Anyone who loves the films of Pedro Almodovar will no doubt find Volver to be amongst as one of his essential films. Fans of films about sisterhood will no doubt find something that women can relate to, even through their different generations and age groups. In the end, Volver is a funny, sad, heartfelt film that crosses all barriers from the unique vision of Pedro Almodovar.

Pedro Almodovar Films: Pepi, Luci, Bom - Labyrinth of Passion - Dark Habits - What Have I Done to Deserve This? - Matador - Law of Desire - Women on the Verge of a Nervous Breakdown - Tie Me Up! Tie Me Down! - High Heels - Kika - The Flower of My Secret - Live Flesh - All About My Mother - Talk to Her - Bad Education - Broken Embraces - The Skin I Live In - I'm So Excited! - Julieta