Well, the holiday film season is well underway but it's also overcrowded. Right now, I have a list of films that is in my top films of 2011. Here's the list so far:
1. The Tree of Life
2. Shame
3. We Need to Talk About Kevin
4. Drive
5. Melancholia
6. Midnight in Paris
7. The Descendants
8. Hugo
9. Take Shelter
10. The Skin I Live In
11. 50/50
12. Moneyball
13. George Harrison: Living in the Material World
14. Pearl Jam Twenty
15. The Ides of March
16. My Week with Marilyn
17. The Muppets
18. Contagion
19. Harry Potter & the Deathly Hallows Pt. 2
20. Memphis Heat: The True Story of Memphis Wrasslin'
21. Hanna
22. Source Code
23. From the Sky Down
24. Circumstance
Honorable Mentions: Sleeping Beauty & X-Men: First Class.
I have to admit, I'm impressed at what I've seen so far but there's still about nearly 30 films that I want to see so my list is not likely to be done. I still haven't even finished my 2010 list as there's movies that I'm trying to see. That the fallacy of what I do when it comes to lists is because I want to do it right and have it be presented on my own terms. I will probably come up with a list if I'm asked to do one but I'll do it with some reluctance.
Meanwhile, the only other thing I'm working on other than reviews is my list for the Most Anticipated Films of 2012 which is nearly done though I'm aware that I'm overlooking a lot films. Yet, I'm very specific in what I do as I don't count films that came out in film festivals this year as I'm just focused on actual 2012 releases. That is coming probably next week along with the sixth part of my Auteurs series on Lynne Ramsay which I'm still in the middle of working on.
That's pretty much it that is happening on my blog as I'm also doing some final work on what I will do for 2012 which I will announce next week. For the meantime, I'll just post some old reviews of movies I've already seen and maybe a few new ones of films I've already seen as well. I'm a bit burned out right now and going to take a bit of a break though it's likely I will see new films like Young Adult and Girl with the Dragon Tattoo during the Xmas holidays along with a review of its soundtrack for the latter in my music blog where I'm in the process of moving all of my music reviews on this one to the other.
There's a lot that's been going on in the blogosphere that I've been enjoying lately.
James @ Cinema Sight has this amazing review of a film I just saw around the same time he did in Robert Bresson's Mouchette.
CS @ Big Thoughts from a Small Mind and Andy @ Andy Buckle's Film Emporium have 2 great reviews on Pedro Almodovar's The Skin I Live In.
Andrew @ gmanReviews has one of the best kills out there as he destroys The Sitter.
J.D. @ Radiator Heaven goes inside into the Criterion DVD contents of one of my all-time favorite trilogies in Trois Couleurs.
There's a couple of great reviews on Lynne Ramsay's We Need to Talk About Kevin from Dan @ Dan the Man's Movie Review and John @ John Likes Movies.
There's also some wonderful reviews of Young Adult from Ryan @ The Matinee and Jake @ Not Just Movies.
Norma @ The Flick Chick has a great review on one of the year's best films in The Descendants.
Bonjour Tristesse has a review of the Spanish film Black Bread where he wonders why Spain chose this film for its submission in the Foreign Language Oscar category.
Stevee @ Cinematic Paradox is doing a Harry Potter Marathon as so far is Harry Potter & the Order of the Phoenix as we both seem to really hate Dolores Umbridge.
Finally, there's And So It Begins... which is my new favorite blog at the moment for its reviews and pieces on actors and their performances. My favorite piece is on Michael Shannon who is hot right now. My favorite performance of his is Petey from Cecil B. Demented.
Well, that is pretty much for today. Monday, I'll do another post to reveal what I'll do for 2012 and hopefully have something new out there as I'm just working on other things. Until then, happy holidays and have a woo-woo-woo new year!!! 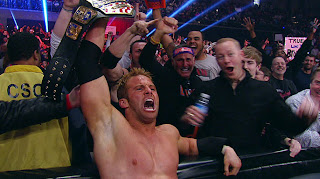 I like your listing of 2011 films. There are a few I am yet to see (Shame, Hugo etc.) but most of them sit pretty high for me too. Thanks for the link to BTW!!

Thanks for the link Steve! Appreciate it man.

Thanks for the link! And I hope you have a great festive season :)

nice to see someone was there to hear me rant and rave about THE SITTER....

Haven't started to work on my Top Ten of 2011 but I hope to get that knocked out in a couple weeks... love your link roundups everytime they come around man... great work on everything.

Thanks for the link love. I am hoping to have my best of 2011 list up on January 1st. Hoping to squeeze in a few more films in the next week. Several of the films in your top ten will most likely be on my list as well.

@Andy-I await your reviews for Shame and Hugo.

@Dan & Stevee-You're welcome. Hope you have a fantastic holiday as well.

@Andrew-Anyone who rants about The Sitter should be noticed.

@CS-I hope you don't overlook a few films. I'm looking forward to what you have in the top 10.

Thanks for the mention. It is always appreciated.