Originally Written and Posted at Epinions.com on 3/24/09 w/ Additional Edits. 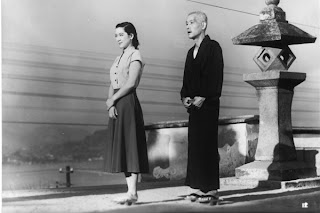 Directed by Yasujiro Ozu with a script co-written with longtime collaborator Kogo Noda, Tokyo monogatari (Tokyo Story) tells the story of an elderly couple traveling to Tokyo to visit their grown children. Upon their arrival, they see that their children have become too absorbed in their own lives as they ponder their existence around the children they had raised. The film is a personal tale of a couple dealing with their own existence as well as what their children have become and the treatment they receive. Starring Chishu Ryu, Chieko Higashiyama, Kyoko Kagawa, Setsuko Hara, Haruko Sugimara, and So Yamamura. Tokyo monogatari is a thoughtful yet universal tale from Yasujiro Ozu.

Shukichi (Chishu Ryu) and Tomi Hirayama (Chieko Higashiyama) are set to go on a trip to Tokyo to visit their elder children. Living with them in their seaside town of Onomichi is their youngest daughter Kyoko (Kyoko Kagawa), who works as a schoolteacher. Arriving to Tokyo to meet their eldest son Koichi (So Yamamura), who is a pediatrician, and their hair salon manager Shige (Haruko Sugimara). Shukichi and Tomi live at Koichi's place for a while with his wife Fumiko (Kuniko Miyake) and two sons. The eldest child Minoru isn't really happy, even when they were supposed to go on a tour of the city that got cancelled because Koichi had to help a sick child. Even Shige has a hard time trying to fit in her time with her parents as they call in their widowed sister-in-law Noriko (Setsuko Hara) for help. Noriko takes them on a tour of the city with much delight while telling them stories about her late husband.

With the living situation troubled, Shige and Koichi suggests they stay at a modern-day spa to relax. Unfortunately, the spa was too loud for the elderly couple to stay as they decided to return to Shige's. With Shukichi wanting to visit a couple of old friends where he expresses his disappointment over his elder children, Tomi stays at Noriko's where she suggest that Norkio should remarry. Shukichi and Tomi decide to return home with Noriko giving Tomi some spending money as gratitude while hoping to visit them at their seaside home. With Shige and Koichi set to return to their normal, busy lives, they receive some news about Tomi that forces them to go to Onomichi with Noriko joining them. With the youngest song Keizo (Shiro Osaka) coming as he met his parents briefly on their way back. The children is forced to ponder the days of the trip with Kyoko wondering about the idea of getting old as Noriko has own perspective about growing up.

The film's story is a simple story about an elderly couple visiting their older children in Tokyo and dealing with the lives of their children along with the changes that's going on. Yet, that's what the film is about in some respects but it's really more about two journeys the parents take to Japan and the children's journey to visit their parents during a catastrophic event. What it's really about is how a family is disconnected by changes and other things and how the children are trying to have the time to spend the day with their parents but are forced to deal with their own lives. For the parents, the visit for their kids haven't been as enjoyable as they wanted to be as the elderly kids feel a bit disappointed while their parents aren't happy about it either with the exception of the daughter-in-law Noriko who was the only person to give her whole day's worth for her in-laws.

For the parents, it's clear that changing times and maybe expectations for their children are some of the reasons why the trip wasn't enjoyable along with the grandchildren who aren't as engaging or disciplined as they wished they could be. Still, they have managed to accept that it's their lives and wish they could have more time as they decided to go home. When news came about their mother's illness, the children along with Noriko go to the seaside home despite their mother's wishes not to visit them. Yet, it's clear that what happens prove to be troubling with the youngest son feeling guilty for not getting the telegram right away due to business travel. What happens afterwards near the end has the youngest daughter Kyoko upset over the selfishness of the two elder kids. It's Noriko's comments about life and changes that prove to be more profound and universally truthful.

The screenplay is not very plot-driven as it the story does start out slow early on when the parents arrive to Tokyo. Yet, the subtle touches Yasujiro Ozu and co-screenwriter Kogo Noda like Tomi's comments to Noriko about getting married again so she wouldn't have to be lonely. A lesser film would've delved into sentimentality but the story and character refuses to in order to have the story told. Even little touches that the writers create that would prove to be foreshadowing at first don't seem like a big deal until later on. Yet, the interaction between parents and children and grandparents and grandchildren feel very realistic in its storytelling. Even in the film's third act where Shige makes comments that might seem heartless but it's only because she wished that she wouldn't have to go through this current state of event in her life while wanting something that Kyoko feels is very selfish.

The storytelling and development of characters and their situation is genius to how the story is told. It's the approach of what Yasujiro Ozu does as a director by bringing in an intimacy and minimalist staging to telling the film. With his striking compositions he creates in his direction along with the camera not making any kind of movements. There's something that is engaging yet also, a bit imposing in what Ozu is doing with the direction. A lot of the film's interior scenes are shot on the floor to emphasize its intimacy as well as exploring the conversations that goes on. Ozu's camera is invested in what is going on while the compositions he creates including some far exterior shots of the cities to know where the characters are. Even though it takes a while for the film to move in its slow-pacing, Ozu's direction definitely pays off towards the end as he creates a film that is universal and relevant more than fifty years since its release.

Cinematographer Yuuhara Atsuta does an excellent job with the film's black-and-white photography to help Ozu in the film's unique, striking visual compositions. Atsuta's work including the shadings of light in some of the rooms as well as the use of sunlight for the daytime exterior scenes in emphasizing the film's mood. The overall cinematography is one of the film's technical highlights along with the editing by Yoshiyasu Hamamura. The editing is mostly straightforward since there's no camera movements as it has a nice, rhythmic cutting along with transitions with not much use of fade outs. Instead, the cutting is just a simple cut to display the film's sense of simplicity. The production design by Tatsuo Hamada and Itsuo Takahashi is very good for its contrast of traditional Japanese housing in the parents' home with the more modern-day look of the homes that everyone else lives in.

Costume designer Taizo Saito does a nice job with the film's costumes with its robes and suits that Shukichi wears along with the robes in the film's third act. The music by Kojun Saito is truly extraordinary with its sense of melancholia and playfulness to emphasize on the film's varied emotions with lots of sweeping and somber arrangements. Saito's score is truly mesmerizing as it's another of the film's notable technical achievements.

The cast is excellent with its small appearances from Sachiko Mitani as the neighbor of Shukichi and Tomi along with Nobuo Nakamura as Shige's husband. Hisao Toake is good as Shukichi's longtime friend Hattori along with Eijiro Tono as another friend who expresses disappointment over how his son turned out. Zen Murase and Mitsuhiro Mori are excellent as the sons of Koichi with Mori having a more memorable role as the selfish older son. Kuniko Miyake is good as Koichi's wife Fumiko who is trying to remain order in her house for her in-laws while Shiro Osaka is very good as Keizo, the youngest son of the family who expresses guilt over not getting a telegram in time about his parents.

Kyoko Kagawa is great as Kyoko, the youngest daughter who lives with her parents while being very angry over what happens about their trip and at her siblings. Haruko Sugimara is excellent as the eldest daughter Shige who might seem cruel in how she says things about her family though in truth, really does care about them despite her very busy life. So Yamamura is also excellent as Koichi, the eldest son who has no idea what to do with his parents due to his own work as he makes the suggestion of putting them in a spa. The film's best supporting performance easily goes to Setsuko Hara as Noriko, the daughter-in-law who does all of her efforts to spend her time with her in-laws. Hara's performance is truly phenomenal and not drenched with sentimentality as a woman trying to move on with her life though deciding not to get married while is convinced that she is selfish even though Shukichi and Tomi believe that she isn't.

Chieko Higashiyama is great as Tomi, the lively mother who smiles a lot as she tries to understand her kids and connect with her grandchildren. Higashiyama's performance is full of life and wisdom as she has a great scene with Hara that requires little emotion the interaction they have is full of magic. Chishu Ryu is brilliant as Shukichi, the father who is hoping to see all of the great things he hears about his elder kids while dealing with the changing times. Ryu, a regular of Ozu's films, is truly amazing in his understated performance while he has great scenes with Higashiyama as the chemistry the two have is amazing. The near-last scene with Ryu and Hara is also amazing for its understated tone and its emotional impact with Ryu being so subtle and not doing much with Hara giving into a heartbreaking performance that is devastating to watch.

Tokyo monogatari is a mesmerizing yet heartbreaking film from Yasujiro Ozu with a universal message about family and changing times. Audiences new to Ozu will find this film as a great introduction to his unique, visual style and compositions while film students will definitely find something in his minimalist technique in terms of directing and staging. With a superb cast led by Chishu Ryu, Chieko Higashiyama, and Setsuko Hara, it's a film that has themes that are still relevant to this day as it crosses many barriers. In the end, for a film that is touching about the idea of family, growing up, and expectations. Tokyo monogatari is the film to see from one of cinema's great masters is Yasujiro Ozu.

Yasujiro Ozu Films: (Sword of Penitence) - (Days of Youth) - Tokyo Chorus - I Was Born, But… - (Dragnet Girl) - Passing Fancy - (A Mother Should Be Loved) - A Story of Floating Weeds - (An Inn in Tokyo) - (The Only Son) - (What Did the Lady Forget?) - (Brothers and Sisters of the Toda Family) - (There Was a Father) - Record of a Tenement Gentleman - (A Hen in the Wind) - Late Spring - Early Summer - (The Flavor of Green Tea Over Rice) - Early Spring - Tokyo Twilight - (Equinox Flower) - Good Morning - Floating Weeds - Late Autumn - The End of Summer - An Autumn Afternoon