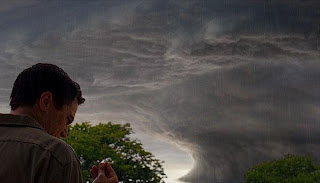 Written and directed by Jeff Nichols, Take Shelter is the story about a man who has an apocalyptic dream as he struggles to create a shelter. With his obsession becoming more intense, his relationship with his family becomes strained as he is convinced that something bad will happen. Starring Michael Shannon, Jessica Chastain, Tova Stewart, Shea Whigham, Katy Mixon, Ray McKinnon, Lisa Gay Hamilton, and Kathy Baker. Take Shelter is a chilling thriller from Jeff Nichols.

Curtis LaForche (Michael Shannon) is a respected laborer who has a loving wife in Samantha (Jessica Chastain) and a lovely yet deaf daughter Hannah (Tova Stewart) as they live happily in Texas. Then Curtis starts to have strange nightmares that revolves around an apocalyptic storm that is to wreak havoc. While Curtis is unsure about the dreams he’s having as it felt very real to him, he chooses not to tell his wife as they’re on the verge of having money for surgery for their daughter’s chance to hear. After the dreams intensify and he tells a doctor about it, he reluctantly takes pills only to realize that he’s starting to see things that might actually be happening.

While he suspects that he might be suffering from schizophrenia due to the fact that his mother (Kathy Baker) has been hospitalized for it. Curtis suddenly becomes paranoid as he decides to fix up and expand a tornado shelter in his backyard. While his friend and co-worker Dewart (Shea Whigham) reluctantly help out, Samantha wonders what is going on as she finds herself asking questions about Curtis’ behavior. Curtis finally tells Samantha about his nightmares following a health scare as well as revealing that he’s taken a loan to build his shelter. With his dreams becoming more ominous, Curtis’ paranoia starts to affect everyone as the whole town is convinced that Curtis has gone crazy. Curtis wonders if he is going crazy until a dream has him convinced that a storm is definitely coming.

The film is about a man’s belief that his apocalyptic nightmares are coming true as he starts to question his own sanity and the decisions that he’s making. Throughout the film, Curtis LaForche ponders if he is imagining all of this or does he really think it’s happening as a visit to see his mother would only raise more questions about his state of mind. Jeff Nichols creates a film that is part-apocalyptic thriller and part-family drama as it all centers towards a family man who is desperate to create a shelter for his family. His script dwells into this man’s paranoia that starts off with a nightmare and then shifts back into his real life as he would later have trouble deciphering in what is real and what is a dream. Curtis would question his own state of mind but couldn’t escape what he feels as his wife would start to believe that he might be telling the truth despite her own initial feelings and confusions about what her husband believes.

Nichols’ direction is truly hypnotic from start to finish in the way he opens the film with a man doing household activities outside where it starts to rain but water color is very different. Nichols creates something where it starts off as this intimate drama set nearby Austin, Texas that follows a man being a laborer who is competent and friendly while his wife sells her own handmade clothing in fair markets. Nichols does change that calm, happy tone for a darker one by creating lots of sequences involving rain and storms to play up Curtis’ state of paranoia as the film becomes a thriller but an unconventional one due to the dramatic material in the film. Nichols also creates amazing wide shots and eerie camera movements to play up the suspense as it leads to this big moment when the storm might actually happen. The result is a truly engrossing yet exhilarating film from Jeff Nichols.

Cinematographer Adam Stone does a brilliant job with the film‘s stylish yet gorgeous photography from the sunny look of the Austin suburbs to the haunting exteriors of the rain and lightning scenes plus some eerie interior shots including one in the actual shelter that Curtis has built. Editor Parke Gregg does an excellent job with the editing to help create suspense in the dream sequences as well as play up the paranoia that surrounds Curtis. Production designer Chad Keith, along with set decorator Adam Willis and art director Jennifer Kilde, does fantastic work with the set pieces created from the home of the LaForches to the shelter that he builds.

Costume designer Karen Malecki does a very good job with the clothes as a lot of it is very casual to what people would wear in Texas, that is cowboy clothing. Visual effects supervisor Chris Wells does a superb job with visual effects that is created such as the lightning and the horde of flying birds that Curtis sees. Sound designers Joshua Chase, Will Files, and Lyman Hardy do great work with the sound work to help play up the suspense and intimate locations that occurs such as Curtis’ big blow-up at a restaurant. The film’s score by David Wingo is wonderful for its melodic-driven pieces in the piano and guitars along with heavy orchestral pieces to play up the drama and suspense that occurs in the film.

The casting by Lillian Pyles is terrific for the ensemble that is created as it includes noteworthy appearances from Lisa Gay Hamilton as a counselor Curtis meets, Ray McKinnon as Curtis’ older brother Kyle, Katy Mixon as Samantha’s friend Nat, Heather Caldwell as Hannah’s teacher, Scott Knisley as Curtis’ doctor, and Robert Longstreet as Curtis’ boss. Tova Stewart is excellent as Curtis’ deaf daughter Hannah for the way she is silent throughout the film while Shea Whigham is wonderful as Curtis’ best friend/co-worker Dewart who is confused by Curtis’ actions and the decisions that Curtis would make later in the film. Kathy Baker is superb in her one scene performance as Curtis’ mentally-ill mother who reveals her own recollections of her breakdown that would question Curtis’ state of mind.

Jessica Chastain is radiant as Curtis’ wife Samantha who is baffled by her husband’s irrational thinking as well as the fact that she’s been kept in the dark. It’s a very captivating performance from the actress as she has a lot to do while showing her frustrations and sadness in the way she has to deal with her husband and how she tries to ground him. Finally, there’s Michael Shannon in an outstanding performance as Curtis LaForche. Shannon brings a manic sense of fear to his role as a man seemingly lost in his paranoia while he also shows a sense of warmth in low-key scenes where he’s just a loving father and husband. Yet, there’s also a calmness to the way Shannon brings out the craziness of his character as it’s definitely one of his best performances of his career.

Take Shelter is a tremendous yet haunting film from Jeff Nichols that features magnificent performances from Michael Shannon and Jessica Chastain. The film is definitely powerful for the way it uses suspense to capture a man’s descent into madness though he could be telling the truth. The film also serves as a real breakthrough for Jeff Nichols who is definitely one of the new voices working in American cinema. In the end, Take Shelter is a marvelous yet suspenseful film from Jeff Nichols.

I've seen the movie this weekend and now I'm writing a review, it was great and much like "Moneyball" it didn't leave my mind days after watching it. I was surprised how creepy and even scary the movie was. Great review, I love that you mentioned Wingo's amazing score.

I've heard of David Wingo through his work with David Gordon Green (when he used to make good movies) and was always a fan.

It's one of those films that won't leave your mind and I enjoyed it. Notably the ending.