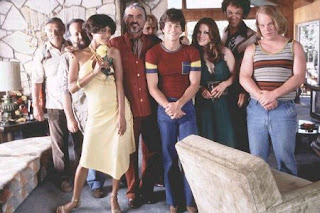 Eddie Adams (Mark Wahlberg) is a 17-year old kid who works as a busboy for a club owner named Maurice Rodriguez (Luis Guzman). One of the club regulars is Maurice’s friend and renowned porno filmmaker Jack Horner (Burt Reynolds) who hears that Eddie is well-endowed. After meeting Jack and his longtime girlfriend/porno actress Amber Waves (Julianne Moore), Eddie feels like he’s got a chance to make something himself away from the verbal abuse of his own mother (Joanna Gleason). After an audition with one of Jack’s actresses in the young Rollergirl (Heather Graham), Eddie succeeds as he meets actors in magician/musician Reed Rothchild (John C. Reilly) and a stereo salesman named Buck Swope (Don Cheadle).

Renamed Dirk Diggler, Eddie immediately becomes a star with Jack guiding him as he makes Eddie part of a family that includes cameraman/editor Kurt Longjohn (Ricky Jay), actress Becky Barnett (Nicole Ari Parker), soundman Scotty (Philip Seymour Hoffman), and assistant director Little Bill (William H. Macy). Jack hopes to get some respect outside of the world of the porn industry where he, Eddie, and Reed come up with a series of films that become popular. After a New Year’s Eve party to end the 1970s ended in tragedy, Jack’s hopes to become legit crashes when his longtime financier Colonel James (Robert Ridgley) is arrested. Having to work with another producer in Floyd Gondoli (Philip Baker Hall) who forces Jack to switch from film to video, Jack’s world starts to fall apart as Eddie becomes addicted to drugs.

For Jack and the people around him, things become tough in the 1980s as Buck and his wife Jessie St. Vincent (Melora Walters) hope to start a stereo business for themselves. Eddie and Reed are unable to get their music career going due to their own addictions while Amber finds herself going through child custody issues with her ex-husband (John Doe). With all of the turmoil surrounding Jack, Eddie, and their splintered group of friends, Eddie and Reed would face a troubling encounter with a dealer in Rahad Jackson (Alfred Molina) when their friend Todd Parker (Thomas Jane) tries to make things complicated in a deal gone wrong.

It’s part of what Paul Thomas Anderson does as a storyteller in creating characters that are engaging but also striving to be somebody and feel proud of themselves. Jack Horner, Amber Waves, and Dirk Diggler are just among the group of people featured in this massive ensemble drama in the span of nearly a decade starring with the late 70s to the early 80s. The characters Anderson create are more than what they’re given as there’s a gay soundman who falls for Dirk, an African-American stereo salesman who loves country music, a high-school dropout who never takes off her roller-skates, and a porn actor that loves to do magic tricks and play rock n’ roll.

Cinematographer Robert Elswit does an incredible job with the photography from capturing the vibrant and colorful lights of the discos and the sunny Californian exteriors for the scenes of the 70s. For the 80s sequences, the look remains the same but has a darker feel as there’s a lot of material shot at night to exemplify the tough circumstance the characters face throughout the film. Editor Dylan Tichenor does a brilliant job with the editing to maintain a leisured pace throughout while creating wonderful montages to exemplify the excitement of the 70s as well as the struggles the character go through in the 80s where the editing shifts what circumstance the characters go through.

Production designer Bob Ziembecki, along with set decorator Sandy Struth and art director Ted Berner, does a sensational job with the set pieces created such as Jack‘s lavish home and Maurice‘s disco to the stylish but eerie home of Rahad Jackson. Costume designer Mark Bridges does a fantastic job with the costumes created from the bellbottoms, hot pants, and the stylish clothing of the 70s to the more grimy look of 80s fashion. Sound editor Dane A. Davis does an excellent job with the sound from the way the parties are captured to the intimacy of Dirk’s first day working on a porno set.

The film’s score by Michael Penn is very wonderful for the array of moods created such as the soothing yet playful harmonium piece for the first half performed by Jon Brion to a more intense yet haunting score for its second half. Music supervisors Bobby Lavelle and Karyn Rachtman create an amazing soundtrack that is filled with lots of music from the 70s and 80s from acts like the Emotions, War with Eric Burdon, Electric Light Orchestra, the Commodores, Hot Chocolate, Rick Springfield, Night Ranger, Nena, and many others.

Other notable yet brilliant small supporting roles include Philip Baker Hall as the brash yet sleazy producer Floyd Gondoli, Ricky Jay as Jack’s filmmaking collaborator Kurt Longjohn, William H. Macy as Jack’s assistant director Little Bill, the late Robert Ridgely as Jack’s old financier/producer Colonel James, Melora Walters as Buck’s new porn star girlfriend Jessie St. Vincent, and Luis Guzman as the funny club owner Maurice Rodriguez. Philip Seymour Hoffman is excellent as the sensitive yet caring Scotty who is in love with Dirk while John C. Reilly is great as the upbeat Reed Rothchild while bringing some great humor to his character. Don Cheadle is excellent as the sensitive yet country music-loving Buck Swope who is accused of not being black enough while just trying to be an all-around nice guy. Heather Graham is wonderful as the sexy yet innocent Rollergirl who likes to have fun while hoping to be accepted as a smart girl.

This film is amazing and how PT Anderson cares for each and every single character is what sets this film apart from all of the other Altman look-alikes. It's also awesome how everything leads up to the final shot which is an iconice shot and I'm still convinced that that is really Marky Mark's, if you know what I mean. Good review Steve.

This is still my favorite PT Anderson film. I just love how fun it is and the way it was shot and everything.

Oh, and that last shot of Marky Mark's penis... it's fake.

nice writeup! a classic, energetic film. one of the first films i saw in the theater that really blew me away.

@mrjeffery-Thanks. After looking at my old review from Epinions.com. I decided that a new one had to be written. Took me a few hours but I've managed to make it feel right and kill the old one.

I plan to talk more about that film during my Auteurs piece on P.T. Anderson next year and as a piece in my Favorite Film Series next year as well.

GREAT review of a such a great movie. Boogie Nights is one of my absolute favorites. I become undeniably enthralled everytime I watch it.

And as for Marky Mark's junk, PTA says on his director's commentary something to the effect of, "...and, yeah, that's a big fake giant cock strapped on Mark."

@Alex-It's one of those films with every re-watch, there's something new about it and makes it more fun to watch. I knew that was a fake cock!