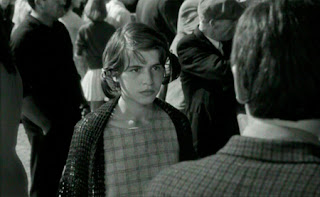 Based on the novel by George Bernanos, Mouchette is the story of a young girl living with an ailing mother, an alcoholic father, and a baby brother as she struggles with her environment while having a dark encounter with a poacher. Written for the screen and directed by Robert Bresson, the film is a coming of age tale of a teenage girl as Bresson explores her daily routine and the drab life that she lives in. Starring Nadine Nortier, Jean-Claude Guilbert, Maria Cardinal, and Paul Herbert. Mouchette is a devastating yet mesmerizing portrait of a young girl’s life from Robert Bresson.

Mouchette (Nadine Nortier) is a young girl who lives in a dilapidated home with her abusive yet alcoholic father (Paul Herbert) who works nights transporting alcohol with her older brother. Mouchette would care for her baby brother and her ailing mother (Marie Cardinal) for days and night while going to school in ragged clothing where she’s treated cruelly by her classmates and her teacher. Though she would often try to find time for herself during a carnival day where she rides bumper cars and catch the interest of a boy. The presence of her father would prevent her from making some form of contact.

One day after school, Mouchette would walk into the woods during a rainy day where an epileptic poacher named Arsene (Jean-Claude Guilbert) had an encounter with the local gamekeeper Mr. Mathieu (Jean Vimenet) over a local barmaid named Louisa (Marine Trichet). Mouchette later meets Arsene as something probably happened as he takes her to his cabin where he would have a fit. Later returning home, Mouchette realizes her mother’s illness is worsening as she starts to ponder about her own life and the idea of being appreciated.

The film is essentially a portrait of a lonely young girl living in a rural French town where not a lot is happening and her home life is troubling as her mother is very ill with a baby brother that is need of care. The girl’s father is an alcoholic who works nights to transport alcohol for a bar and doesn’t treat her very kindly leading her to feel bad about herself. At school, she is often seen wearing the same ragged clothes with shoes that are too big for her to wear where she is ridiculed by her teacher for not singing and then singing off-key. For this young girl, it’s part of the world she lives in with not many people who will treat her kindly as she often feels she’s not good enough or trustworthy for anyone.

Robert Bresson’s script doesn’t start off with Mouchette and her plight but rather a scene where her mother revels about the life that her children will lead once she is gone. He then follows with scenes about the gamekeeper watching the poacher catching game which doesn’t really have to do anything with the main plot of the film until later on when Mouchette would have to deal with the poacher. What Mouchette would encounter with this man will test not just her loyalties but her usefulness as she feels like she’s part of something. Yet, her devotion to her mother and baby brother would only make her feel morally confused in what she’s doing. It would only get worse when its aftermath makes her feel more out of place with everyone as she is lost.

Bresson’s direction is truly mesmerizing in the way he follows the girl as he uses his script to let things play out naturally as there’s not a lot of dialogue that goes on. Instead, he observes the life of a young girl from afar with some close-ups and intimate shots of the girl’s surroundings. While the film also includes lots of gorgeous nature shots to exemplify the world that she is in as well as the poacher and gamekeeper. There is a very entrancing look to the those nature scenes as well as a scene of Mouchette in the bumper cars which adds a liveliness to the way it plays out. The film’s ending is definitely one of the most iconic for the way Bresson just let things play simply and frame it in such a delicate manner. Overall, this is a truly outstanding yet heartbreaking film from Robert Bresson.

Cinematographer Ghislain Cloquet does a superb job with the film‘s black-and-white photography to complement the naturalistic look of the nature scenes with lots of beautiful sunny touches of its location to more darker yet eerie lighting schemes for the interior and exterior nighttime scenes. Editor Raymond Lamy does an excellent job with the editing by using jump-cuts and other sort of rhythmic cuts to intensify some of the drama or to slow things down for the scene to play out.

Art director Pierre Guffroy does a wonderful job with the set pieces created such as the bar the gamekeeper and poacher frequent as well as Mouchette‘s poor home and the poacher‘s spacious cabin. Costume designer Odette Le Barbenchon does a nice job with costumes to complement the look of Mouchette‘s personality which is filled with oversized clogs, a coat-like dress, and ruined socks to display her world. The sound work of Jacques Carrere, Daniel Couteau, and Severin Frankiel is terrific for the way the locations are captured including the nature scenes during its rainy day to convey the dread that Mouchette will face. The film’s score by Jean Wiener is very good to as it only appears in the bumper cars scene while the film opens and closes to a piece by Claudio Monteverdi for the appears to liven up the film.

The cast, which is mostly non-professional actors, are amazing it features notable appearances from Raymonde Chabrun as a grocer and Suzanne Huguenin as an old lady as they both offer to help Mouchette along with Marie Susini as the gamekeeper’s stern wife, and Marine Trichet as the barmaid that the gamekeeper and poacher fall for. Other noteworthy small roles include Paul Herbert as Mouchette’s abusive father, Marie Cardinal as Mouchette’s sickly mother, Jean Vimenet as the gamekeeper, and Jean-Claude Guilbert as the epileptic poacher Arsene. Finally, there’s Nadine Nortier in a brilliant yet harrowing performance as the titular character from the way she acts out her quiet emotions to the despair she has to endure as it’s a truly remarkable performance.

The 2007 Region 1 DVD from the Criterion Collection presents the film in a newly restored high-definition digital transfer for its 1:66:1 theatrical aspect ratio for the widescreen format. Featuring new and improved English subtitle translation, the film is given a look that is beautiful to complement its gorgeous cinematography and mesmerizing sound work. The DVD includes numerous special features a trailer that was edited by renowned French filmmaker Jean-Luc Godard.

The feature audio commentary by film scholar Tony Rayns has him discussing the film and its themes. Rayns also reveals what Robert Bresson did change for the film from the actual book in order to create a story that explored the isolation of this young girl. Rayns discusses the themes of a girl’s coming-of-age while suggesting that it’s also about her own sexual awakening while reveling into Bresson’s methods as a filmmaker. Rayns’ commentary is very relaxed and engaging into the film and Bresson’s history while he offers his own interpretation to the film’s controversial yet famed ending.

The thirty-minute Au hasard Bresson documentary by German filmmaker Theodor Kotullar is a making-of documentary on the film Mouchette where Robert Bresson expresses his thoughts on cinema. The film shows Bresson’s approach to directing actors and non-actors while setting up scenes and relaxing between takes. Bresson’s views on cinema reveal a lot of what he thinks as he finds little difference between theater and film in their respective mediums though he admits to not having a high opinion towards the latter. It’s a wonderful documentary short on Bresson as well as a great in-depth look into the making of Mouchette.

The seven-and-a-half minute “Travelling” segment for the film-magazine TV show Cinema features on-set interviews with Robert Bresson and actors Nadine Nortier and Jean-Claude Guilbert as they talk about Bresson’s approach as well as the film itself. Jean-Luc Godard’s trailer for the film is a mixture of playfulness that also emphasize on the dark elements of the film itself. Film writer Robert Polito’s essay on the film entitled Girl, Interrupted divulges into the film’s themes and how it relates to the other films of Robert Bresson prior to this one. Polito also dwells into the tragic circumstances of Mouchette’s trials and tribulations of how she tries to rebel against the world around her. Polito’s essay is a short yet excellent read about Bresson’s revered film.

Mouchette is an affective yet entrancing film from Robert Bresson featuring an astonishing performance from Nadine Nortier. The film is a truly uneasy yet mesmerizing portrait of a young girl’s life as she endures the alienation and unhappiness of her environment. For those interested in Robert Bresson, this film is a worthy place to start for anyone interested in his visual style as it’s quite evident in some of the early work of American filmmaker Terrence Malick. In the end, Mouchette is an extraordinary though very distressing film from Robert Bresson.

Great review. I don't hold this one in as high regard as most critics/film scholars, but it is an excellent work, with a truly affecting performance. It's a shame Nadine Nortier never acted again. It also was the inspiration for the Dardenne's ROSETTA which is one of my favorite films.

Thank you. Now that you mention it, Rosetta is a variation of that film as well. Wow. The reason I chose to see this and get the Criterion DVD because I read that this is Jena Malone's favorite film.

Me and her should be film buddies. She's got good taste.