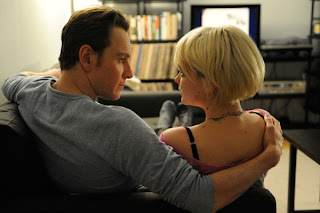 Directed by Steve McQueen and written by McQueen and Abi Morgan, Shame is the story of a 30-something yuppie who struggles with his addiction to sex until the arrival of his younger yet troubled sister that only causes more problems. The film is an exploration into a man’s addiction as well as the broken relationship between himself and his sister. Starring Michael Fassbender, Carey Mulligan, Nicole Beharie, and James Badge Dale. Shame is a gripping yet eerie film from Steve McQueen.

The presence of Sissy would only complicate things as she is just as fucked up and as troublesome as he is. Yet, she knows that while is not really afraid to admit that she is fucked up. She is a very irresponsible person who creates messes and often gets into lots of trouble. The reason she is dependent on Brandon is because she’s unable to really take care of herself as she’s been through another bad relationship and in need to be with someone. There is a hint of a possible incestuous connection between the siblings but McQueen and Morgan choose to remain ambiguous with that relationship as they create this ominous character study as well as a compelling look into the world of sex addiction.

McQueen’s direction is truly mesmerizing for the way he dwells into the complicated life of this man. While there’s a lot of intimate yet somber moments in the way McQueen presents the relationship between Brandon and Sissy. It’s the way McQueen frames the two of them that really gives the film something different and engrossing. Notably the scene of Brandon and Sissy arguing while they’re sitting on the couch as McQueen shoots from the back of their heads as they’re watching TV. Another moment is Brandon’s date with Marianne as it slowly goes into a close-up as they’re having a conversation that is often interrupted by a waiter. The direction is very stylish for that framing while using New York City as a backdrop for a world that is vibrant but also unsettling.

One notable scene is where McQueen shoots Brandon running throughout the city in a tracking shot with one take as his camera is following him. There’s a lot of long takes that happens yet McQueen allows his actors to play things out naturally. Then there’s McQueen’s approach to sex and nudity where it is quite graphic with a lot of full-frontal nudity, male and female. While some might feel the sexual content delves into pornography. That’s not true considering that there’s no shots of penetration or anything that graphic as the sex is quite stylized. Still, it’s all about subtext as McQueen starts the film off with a scene of Brandon staring at this beautiful woman in a subway train while it’s inter-cut with him having sex or doing other sexual-related activities. The overall work that McQueen does is marvelous as well as entrancing as he creates a very stunning portrayal of a man in deep trouble.

Cinematographer Sean Bobbitt does a spectacular job with the film‘s photography from the very entrancing yet lush look of the NYC nighttime exteriors including some very beautiful interiors for some nighttime interiors including Sissy‘s club performance. Bobbitt also does some amazing daytime exteriors and interiors that includes a lot of non-sunlight shots to complement the mood of Brandon in his empty life. Editor Joe Walker does excellent work with the editing in creating that wonderful montage of Brandon’s sexual lifestyle as he stares at a woman in a subway while utilizing a large degree of styles to create a very methodical pace that allows the viewer to be engrossed in the story.

Production designer Judy Becker, along with set decorator Heather Loeffler and art director Charles Kulsziski, does a great job with the look of Brandon‘s apartment that is quite colorless and cold in its look to exemplify his life. Costume designer David C. Robinson does fantastic work with the sound from the suits and clothes that Brandon wears to the more stylish array of wardrobe that Sissy wears such as her red hat and leopard-spotted coat. Sound designer Glenn Freemantle does brilliant work with the sound to capture the atmosphere of the locations including the way music is played at Brandon’s apartment.

The film’s score by Harry Escott is magnificent for the way it plays to the drama with its orchestral swell and arrangements that is just eerie as well as some more ominous pieces played such as Brandon‘s run across the city. Music supervisor Ian Neill does terrific work with the soundtrack as it features a mixture of classical music, dance-club music including disco pieces by Chic and Blondie along with Tom Tom Club, and a devastating rendition of New York, New York sung by Carey Mulligan.

The casting by Avy Kaufman is superb for the cast that is assembled as the film features some memorable small roles from Elizabeth Masucci as a working woman David tries to flirt with, Amy Hargreaves as a woman Brandon has sex with at a hotel, and Lucy Walters as the beautiful woman Brandon eyes at the subway. Nicole Beharie is very good as the secretary Marianne that Brandon tries to connect with in a non-sexual manner while James Bade Dale is stellar as Brandon’s energetic and charming boss David.

Carey Mulligan is astounding in her role as the very fragile Sissy as Mulligan brings a very fiery performance to a young woman that is a mess. There’s some humor to the way her character interacts with Brandon while there’s also a sadness to her. Notably Mulligan’s singing of New York, New York that displays her vulnerability as her overall work is truly one of the most devastating performances displayed for any young actress. Finally there’s Michael Fassbender in a towering yet harrowing performance as sex addict Brandon Sullivan. Unafraid to show himself naked, there is a wonderful sense of restraint to Fassbender’s performance in the way he looks at a woman as a possible conquest. There is also an intensity in the way he tries to vent his anger as well as a charm when he tries to connect with Marianne. It’s definitely Fassbender at his best in what is certainly a very difficult yet mesmerizing performance for the Irish-German actor.

Shame is a hypnotic yet disturbing drama from Steve McQueen featuring two marvelous performances in Michael Fassbender and Carey Mulligan. The film is definitely not for everyone’s taste as it is a very adult film in terms of its strong themes of addiction and human fragility. Particularly with the sexual content that doesn’t play out in being sexy rather in exemplifying a man’s troubled life. In the end, Shame is a stylish yet exhilarating film from Steve McQueen.

Beautiful review! I cannot wait to see this film.

OK then. I should warn you that Michael Fassbender gets naked a lot.

I've been too busy to go see this. Hopefully it's still in the theaters for a couple more weeks.

The only downside about this season is that there's so many good movies out there at this point yet it's impossible to see them all depending on how much money you have or how far it is to go see movie. See if there's a screener available right now since it is probably considered for the Oscars.

I thought this movie was great too, especially the performances by the actors. The New York scene didn't work for me. It was too drawn out, too slow singing and I got impatient. Mabye I'm just a very impatient sort of person. On the other hand I guess I'm not since I like Coppola's movies. Hm. I guess I just failed to decode it.
That pulled it down from what otherwise might have been a 5/5. But overall - a movie to remember from this year.

@Velvet-It's all about interpretations when it comes to this song. It wasn't the rousing New York, New York song that a lot of people are familiar with. It was something different because I think the NYC that we know now is very different from what NYC is in the 1970s and 1980s. While there's part of NYC that is still exciting, it's a place where it's a bit dull now because there's no seediness to it.

I hope to see this film again because it's given me more ideas on this project that I want to work on. Thanks for the comment.