The Death of Mr. Lazarescu 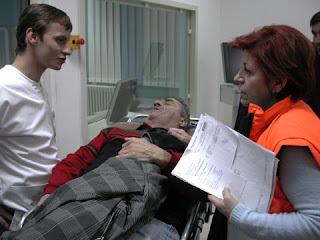 This one is excellent, you really get the sense of riding along in the ambulance, and feel the emotion of knowing these are Lazarescu's final moments, and the frustration of another long night for the paramedics.

I love the pacing and length of these Romanian New Wave films, POLICE ADJECTIVE and AURORA are a couple other great examples of this.

Police, Adjective is one I've been wanting to see. Unfortunately, I no longer have the Sundance Channel which often plays these films. It sucks because I'm interested in the Romanian New Wave.

I have heard some great things about this - but have never seen it anywhere. I'll have to check it out. Romanian cinema hit a peak there for a while, along with 4 Months, 3 Weeks and 2 Days.

@Andy-I saw it on the Sundance Channel a couple of years ago when I decided to watch it for my Cannes Film Festival Marathon.

I'm eager to check out more after seeing 4 Months, 3 Weeks, & 2 Days. In fact, any new wave that is coming from any country is something to cheer for.

Being Romanian, I am happy to see positive reviews about one of our movies, but I always consider them to be too grim and depressing, and constantly showing the bad side of the country-I know drama is popular genre, but I am sure we can do better!Great review, by the way!

@Aziza-Hey, if you have a Romanian comedy that is absurd. Bring it. I want to see it.

@Aziza-OK, I'll see what I can find. I think I'll do a marathon on Romanian films soon although I hope to find some that played at Cannes recently for my next Cannes marathon in May.

Also, there is a very cool movie directed by a Romanian with a Russian cast set in Paris (funny, I know) called The Concert- amazing, you should see it!

@Aziza-I've heard of that film. I'll check it out. Thanks.