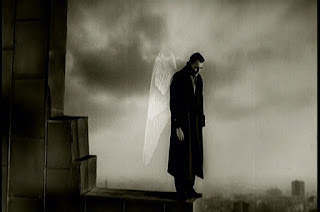 Directed by Wim Wenders and written by Wenders and Peter Handke with additional contributions from Richard Reitinger, Wings of Desire is the story about a group of invisible angels looking over Berlin as they hear the thoughts and prayers of the people they around them as one of them falls for a trapeze artist as he decides to become human. The film is an exploration into the world of faith as well as an angel’s desire to do all of the things humanity is doing. Starring Bruno Ganz, Solveig Dommartin, Otto Sander, Curt Bois, and Peter Falk as himself. Wings of Desire is a rich and exhilarating film from Wim Wenders.

The film is this very simple story about a group of angels watching over the city of West Berlin as they hear the thoughts and hopes of humanity. One of them in Damiel (Bruno Ganz) falls in love with a French trapeze artist in Marion (Solveig Dommartin) who is dealing with the abrupt closing of the circus she’s working for. Damiel’s desire to become human is one aspect of the story though it mostly follows him and his fellow angel Cassiel (Otto Sander) as they wander around Berlin to hear the people and comfort them in time of need. Meanwhile, Peter Falk is in Berlin working on a film as he wanders around the city thinking about its past as does an aging poet (Curt Bois) who Cassiel follows around. It’s all set in a crucial period just before the fall of the Berlin Wall as the angels are observing everything around them while there’s some temptation to experience humanity.

The screenplay by Wim Wenders and Peter Handke doesn’t play into a traditional structure as it’s all very loose where it is about two different worlds that come into play. One is the world that the humans are living as they’re going through all sorts of things while the other are the angels as they are often around the humans to see what is happening. Some are just doing well while others are struggling as the angels even get a chance to glimpse into the memories of a few who are still reeling from the aftermath of World War II. While Damiel and Cassiel are observing all of the people in Berlin, they know that they aren’t seen except from the children of the city. Around Peter Falk, he can sense their presence though he doesn’t see them as he tries to converse with them though he knows he can’t touch them. It’s among the many encounters that intrigues the two angels where Damiel’s infatuation towards Marion has him wanting to become human.

Though Cassiel understands why Damiel would want to do this, he is afraid of the consequences of what Damiel might experience as the film’s third act is about Damiel becoming human in the middle of no man’s land between the east and west sections of Berlin. For Damiel, it is about the experience of being human where he sees color for the very first time and experience such things as taste and smell where there is this air of innocence but also uncertainty. Still, there are those that come to play who will guide Damiel into finding what he needs.

Wenders’ direction is evocative in the way he presents a world that is changing just before the fall of the Berlin Wall as everything is happening as usual. From the perspective of the angels, Wenders gives them a very dream-like perspective as it’s shot largely in a monochrome black-and-white style where they are observers as they would often move around while humans are either still or just oblivious to their presence with the exception of the children and Peter Falk. Some of the shots that Wenders creates often have the camera looking down or just gazing from the air where the angels often place themselves at the Victory Column statue. The direction also has an air of style where there are brief moments where the film is shown in color whenever the angels aren’t at the presence of a major character or through stock footage of the aftermath of World War II.

The scenes shot in color are quite straightforward, especially in the third act where there is this great mix of the two palettes for the scene of Damiel’s transformation to become human in the middle of no man’s land in the Berlin Wall. The city of Berlin is a character in the film as Wenders makes it into a place that is going through some major changes though they’re unaware of what is going to be ahead of them in the next few years. Even as Wenders shoots a couple of concert scenes that feature performances from Crime & the City Solution and Nick Cave & the Bad Seeds that would play major importance to the development of the story. Overall, Wenders creates a very mesmerizing and powerful film about the experience to be alive in the world.

Cinematographer Henri Alekan does brilliant work with the film‘s very stylized monochrome black-and-white style to capture the world of the angels as they are on Earth watching humanity play itself out while using some gorgeous colors for the scenes of humans venturing around the city without the presence of the angels. Editor Peter Przygodda does excellent work with the stylized editing with its use of dissolves and rhythmic cuts to play out the sense of reality and the world that the angels live in as well as the scenes of Damiel soaking in his first experience as a human being. Art director Heidi Ludi and set decorator Esther Waltz do amazing work with some of the set pieces from the set where Peter Falk is working at to the recreation of the Victory Column statue for its close-ups.

Costume designer Monika Jacobs does nice work with the costumes from the more reserved clothes of the angels to the stylish clothes of Marion. Sound mixers Axel Arft and Jean-Paul Mugel do fantastic work with the sound from the layer of the voice-overs where the angels hear the thoughts of the people to the scenes on location to display a world that is changing. The film’s music by Jurgen Knieper is wonderful as it is mainly an orchestral-based score filled with soaring arrangements and some circus music as the soundtrack includes cuts from Nick Cave & the Bad Seeds, Crime & the City Solution, Laurie Anderson, and other classical pieces.

The film’s cast is superb as it is mostly filled with various people in many small roles though it really comes down to the five principle characters in the film that includes Curt Bois as an aging poet who feels lost in the world as he’s looking for Potsdamer Platz while Peter Falk is great as himself as a man observing his surroundings while trying to be part of the world that is Berlin. Solveig Dommartin is amazing as the trapeze artist Marion who is trying to deal with the loss of her art as she is struggling to find something in Berlin. Otto Sander is excellent as Cassiel as an angel who is playing his role as the observer while struggling with wanting to help those in need. Finally, there’s Bruno Ganz in a marvelous performance as Damiel as an angel who is intrigued by humanity as he falls for Marion as he is eager to experience humanity as Ganz brings a lot of heart into the role once his character becomes human.

Wings of Desire is an outstanding film from Win Wenders that features a brilliant ensemble cast as well as very captivating themes on humanity and the idea to be alive. It is definitely one of Wenders’ great achievements as well as a very engaging piece about being human as it’s told from the perspective of angels who are eager to comfort humanity in trying times. In the end, Wings of Desire is a phenomenal film from Wim Wenders.

What a way to open the marathon!

Fell in love with this instantly. I've yet to find another film that manages to make me feel as happy to be alive as this one does.

Yeah, I hadn't seen this film in years. Man, it made realize how fucking good it is and it's a really upbeat film. Why did they have to remake it? It was already perfect.

I've watched Wings of Desire 2-3 times, and I just don't ever get bored with that dream-like atmosphere you mention. I agree the city of Berlin is a character, and I think the film maybe appeals to dreamers who for whatever reason are on the fringes of society.
I haven't gotten around yet to the sequel "Faraway, So Close! (1993), which I read is inferior.

@Chris-It's a film that anyone can easily fall in love with. I've seen Faraway, So Close! which is all right and has its moments and it is inferior. Yet, I'll take that film over most sequels.