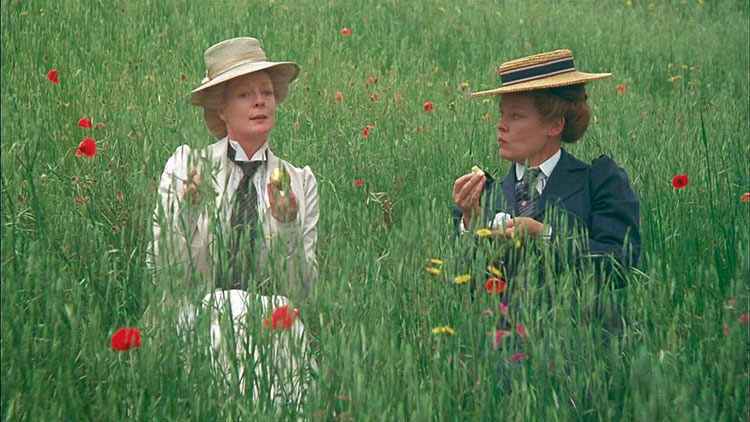 Based on the novel by E.M. Foster, A Room with a View is the story of a young woman who falls for a free-spirited man during a holiday in Italy. Directed by James Ivory and screenplay by Ruth Prawer Jhabvala, the film is a look into a young woman coming of age in a restrictive time during the Edwardian period in Britain in early 20th Century. Starring Helena Bohnam Carter, Maggie Smith, Denholm Elliott, Daniel-Day Lewis, Julian Sands, Simon Callow, Rosemary Leach, and Judi Dench. A Room with a View is a ravishing and enchanting film from the Merchant-Ivory team.

Set in 1907, the film is an exploration into a young woman coming into her own during the Edwardian period in Britain where she meets a free-spirited man during a holiday in Florence, Italy with her cousin as her chaperone. What would happen upon meeting George Emerson (Julian Sands) is that the young Miss Lucy Honeychurch (Helena Bohnam Carter) tries to cope with her feelings for George but also play to what is expected for her as she would later return to England where she would be engaged to a wealthy yet snobbish man named Cecil Vyse (Daniel Day-Lewis). Yet, when George moves nearby with his father (Denholm Elliott), Lucy becomes confused on what she should do as her older cousin Charlotte Bartlett (Maggie Smith) would observe everything as she would also play into Lucy and George’s fate.

Ruth Prawer Jhabvala’s screenplay has a unique structure where the first half of the film is set in Florence where Lucy and Charlotte are on holiday as it’s Lucy’s first visit to the city. It is there that the two meet the Emersons plus an eccentric group of visitors including the very free-spirited priest the Reverend Beebe (Simon Callow), a lively novelist named Eleanor Lavish, two aging sisters in Catherine and Teresa Alan (Fabia Drake and Joan Henley, respectively), and the more stern Reverend Eager (Patrick Godfrey). Upon this holiday in Florence, they all look at various landmarks and such where Lucy and George sense an attraction but the very prim Lucy is bewildered by George’s sense of free-spirit as he likes to climb trees, jump around, and act wildly. Yet, George is also a man who is very sensitive and is willing to do anything for Lucy which would add to this attraction much to the shock of Charlotte who has been watching Lucy for Lucy’s mother (Rosemary Leach).

The film’s second half would largely be set in Surrey, England where several months has passed and Lucy becomes engaged to Cecil who is a very interesting individual for the fact that he’s a character that audiences would love to hate. Largely because he’s this stuffy twat that really has no formidable opinion for anything as he becomes an opponent for George to deal with as he wants to give Lucy something more than just be a trophy wife for this rich, snobbish twat. Yet, the expectations that Lucy has to play with the rules of society would hinder the decisions she makes as her mother, her younger brother Freddy (Rupert Graves), and Charlotte would notice the restrained anguish that Lucy is carrying. One aspect of the screenplay that is very noticeable is the language in the way the characters talk as there’s a certain rhythm to the dialogue as well as how it can help move the story in such a brisk way.

James Ivory’s direction is truly exotic for not just the simplicity of the images he creates but also in how he makes the locations in Florence, Italy and England characters in the film. Many of the compositions of the locations would be presented in wide and medium shots to play into the beauty of the locations and the way the characters react to their surroundings. Especially in a moment where Lucy and George witness a brawl in a square amidst these surroundings of statues and famous landmarks where it would be a key moment into Lucy and George’s relationship. Much of the locations set in Florence would have this air of beauty as well enchantment where a moment of the two having a picnic in the Italian countryside where the two would have their first kiss to the shock of Charlotte. The scenes set in England would contain a similar presentation but there’s also a tightness that goes on early in that section once Lucy is engaged to Cecil.

The direction is more controlled in its tracking shots and such until George would appear to shake things up as there’s a very comical scene of he, Freddy, and Reverend Beebe enjoying a skinny-dip to the shock of Lucy, her mother, and Cecil. The direction would also have moments of symbolism that would play to Lucy dealing with her feelings for George but also to try and devote herself to Cecil as it would create a sense of drama that becomes intense but in a very restrained form. Especially as Ivory’s approach to melodrama doesn’t play to any kind of theatrics in favor of just letting the drama be played out with a tenderness and sensitivity that makes the story far more engaging. Overall, Ivory crafts a very delicate yet intoxicating film about a young woman coming of age in the early 20th Century where she would meet her soulmate.

Cinematographer Tom Pierce-Roberts does brilliant work with the film‘s photography to display the beauty of many of the film‘s exterior locations in the day while using some low-key lights for some of its interiors in the day and nighttime scenes. Editor Humphrey Dixon does excellent work with the editing as it‘s mostly straightforward yet has this seamless flow to play into the drama while infusing a few montages and rhythmic cuts to play with some of the film‘s low-key humor. Production designers Brian Ackland-Snow and Gianni Quaranta with art directors Brian Savegar and Elio Altamura, do amazing work with the set pieces from the look of the hotel rooms Lucy and Charlotte stayed in during their time in Florence to the home Lucy lived in as well as the house George‘s father stayed nearby in England.

Costume designers Jenny Beavan and John Bright do fantastic work with the costumes from the look of the dresses the women wear to the suits and clothes the men wear to play into that period. The hairdressing by Carol Hemming is terrific for the look of the hairstyle of the time that plays into the personalities of the women in the film. The sound work of Ray Beckett is superb for its low-key approach to sound by playing up much of the film‘s natural sounds as well some of the things that are captured on location. The film’s music by Richard Robbins is remarkable for its use of low-key orchestral music to play up the drama while the film’s soundtrack also uses an operatic piece by Giacamo Puccini that is sung by Kiri Te Kanawa that serves as a fitting piece in the film.

The casting by Celestia Fox is incredible for the ensemble that is created as it features some notable small roles from Maria Britneva as Cecil’s mother, Mia Fothergill as Lucy and Freddy’s younger sister, Fabia Drake and Joan Henley as the very charming Alan sisters, and Patrick Godfrey in a terrific role as the very annoyed and strict Reverend Eager. Rupert Graves is wonderful as Lucy’s mischievous brother Freddy while Judi Dench is a total delight as the novelist Eleanor Lavish who is so full of charm and provides some witty commentary. Simon Callow is excellent as the very lively and kind-hearted Reverend Beebe who often gives Lucy some advice on how to live life. Denholm Elliot is amazing as George’s father as a man who has such wit and a good heart as he deals with the anguish of his son. Rosemary Leach is superb as Lucy’s mother who deals with Lucy’s engagement to Cecil and George’s presence as she ponders exactly what Lucy is thinking.

Daniel Day-Lewis is great as the very snobbish Cecil as Day-Lewis brings a charm that makes his character so infuriating to watch because he thinks he’s all that as it’s a performance that is funny to watch. Julian Sands is fantastic as George as this free-spirited man who likes to do all sorts of crazy things but there’s a man who is so good as he tries to woo Lucy and help her find her way. Maggie Smith is brilliant as Lucy’s elder cousin Charlotte as a woman who watches over Lucy while noticing her attraction towards George and later find a way to help guide her into the right direction. Finally, there’s Helena Bohnam Carter in a radiant performance as Lucy as this young woman trying to find herself in the early 20th Century as she deals with what is expected of her as well as it’s a performance that is very enchanting to watch.

A Room with a View is a magnificent film from the Merchant-Ivory team that features outstanding performances from Helena Bohnam Carter, Maggie Smith, Denholm Elliott, Julian Sands, and Daniel Day-Lewis. Armed with amazing technical work and a rich soundtrack, it’s a film that definitely showcases what a period film should be without the need to be superficial or stuffy. Especially as it features a truly evocative screenplay by Ruth Prawer Jhabvala that adds to the elegance of the film. In the end, A Room with a View is a sensational film from James Ivory.

I liked this, mostly because of Helena and Dame Judi, but it is lesser Merchant Ivory to me. I much prefer their other collaborations.

I still have a few Merchant-Ivory films to watch for this month as well a couple early next month as I'm eager to see if the next series of films are better or just as good as A Room with a View as I really enjoyed that one.

I'll have to look this one up. It sounds like a really great historical.

Oh my! How could I have missed this review. I actually just saw A Room with a View a few yrs ago for the first time. I enjoyed it, interesting to see Julian Sands in a leading role as I've only seen him in his later years playing bit parts here and there.

The star of the film is definitely Helena though, and Day-Lewis is of course always watchable. I love seeing real-life BFF Dames Judi Dench and Maggie Smith here too! So apparently Rupert Graves is Mr. Ivory's muse eh? I just read your review of a James Ivory film that he also starred in.

@ruth-I still have a few films of Merchant-Ivory to watch for this month as I am really enjoying these films. If I saw them when they had come out where I was just a kid, I'd be bored by those films.

It's the kind of films that need to be seen by adults and they're just so damn good.