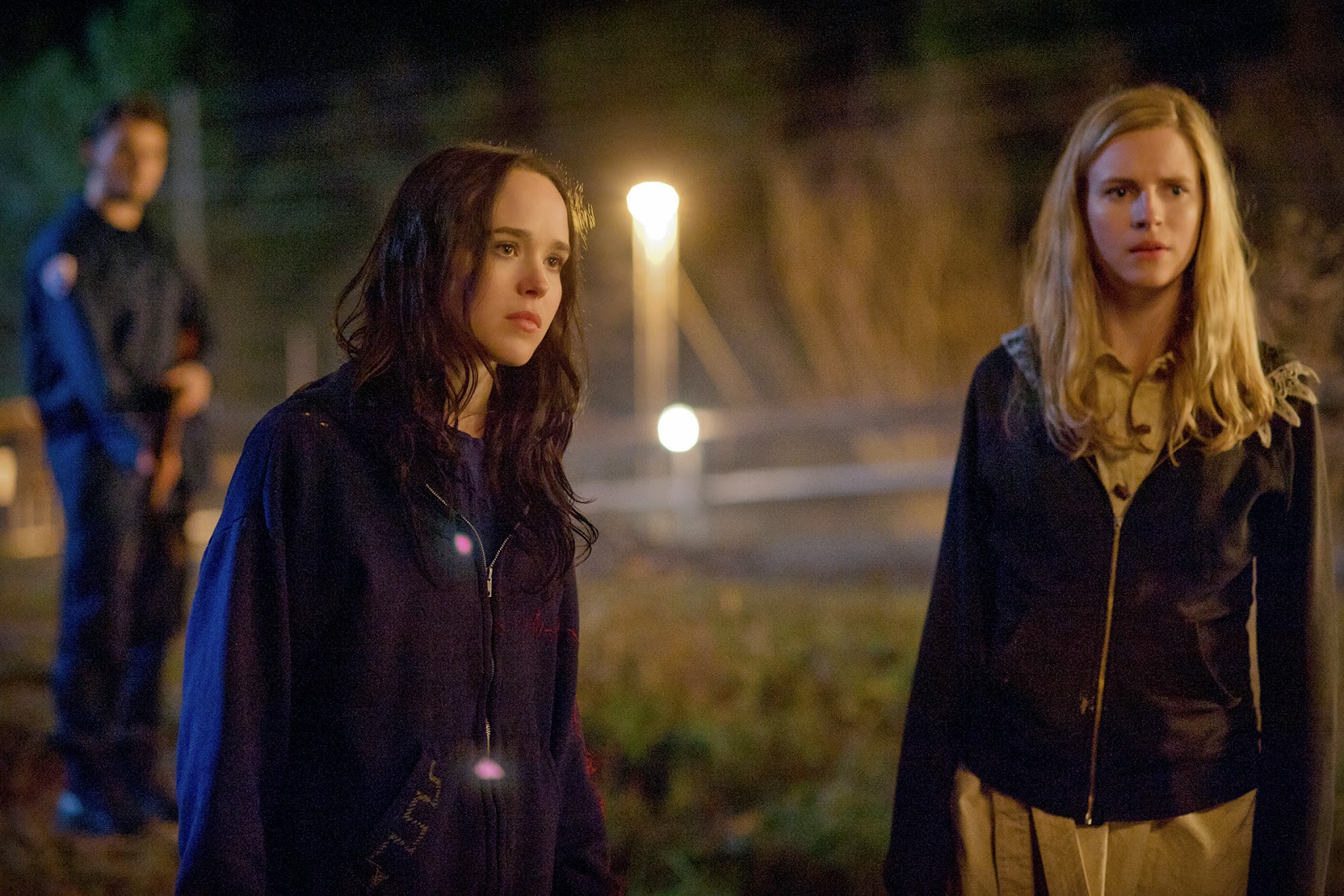 Directed by Zal Batmanglij and written by Batmanglij and Brit Marling, The East is the story about a young woman hired by a private intelligence firm to infiltrate a group of underground eco-terrorists. The film is an exploration into the world of anarchists where a young woman tries to see what they’re about and whether they’re doing something that is very noble. Starring Brit Marling, Alexander Skarsgard, Ellen Page, Toby Kebbell, and Patricia Clarkson. The East is a chilling yet gripping film from Zal Batmanglij.

The film is a suspense-thriller where a young woman who works for this private intelligence firm is hired to infiltrate an underground eco-terrorist group that has been attacking many corporations who have been known for their corruption. Upon infiltrating this group known as the East, Jane (Brit Marling) finds herself drawn to their cause as she realizes that their intention is to hurt these leaders and face the consequences of their actions. For Jane in her Sarah alias, she falls for the leader Benji (Alexander Skarsgard) as she learns more about his background as well as his associates in Izzy (Ellen Page) and Doc (Toby Kebbell). Particularly their motivations into being part of this group as Jane would report everything to her supervisor Sharon (Patricia Clarkson) but find herself in conflict with everything else she’s doing.

The film’s screenplay not only explores the conflicts that Jane/Sarah would deal with but also the sense of danger she is going into as she knows she’s getting too close to targeting Benji and the East. Yet, she realizes that the people they’re after are individuals who are responsible for ecological disasters that have killed or harmed innocent people through chemicals and such. Especially as Benji, Izzy, and Doc have been affected in some way over what has happened by these corporations as Jane becomes confused in helping them or helping Sharon who knows exactly what Jane is going through which adds an ambiguity to her character as she isn’t presented as a typical antagonist.

Zal Batmanglij’s direction is quite entrancing in the way he presents some of the attacks the East does where it’s very underground and secretive though their intention is to never kill anyone but rather hurt them. Much of the direction involve some hand-held shots as well as scenes where it adds to some of the elements of suspense where it’s shot around Shreveport, Louisiana to play into a world that is low-key but also has cities and such where Jane can go back to. Some of the compositions involve close-ups and medium shots where Batmanglij plays into the drama and suspense that includes a chilling moment in the film’s second act which involves Izzy and her motivations as it becomes a key turning point for Jane possibly wanting to help the East more. Overall, Batmanglij creates a very compelling and intoxicating film about an undercover agent who goes into deep into the world of an underground eco-terrorist group.

Cinematographer Roman Vasynov does excellent work with the film‘s cinematography from the usage of low-key lights for some of the scenes at night to some of the more natural setting in some of the forest scenes that is contrast to the lighting in the building that Jane works at. Editors Andrew Weisblum and Bill Pankow do amazing work with the editing with its usage of montages for the film‘s opening sequence to other array of stylish cuts to play into the film‘s suspense and drama. Production designer Alex DiGerlando, with set decorator Cynthia Slagter and art director Nikki Black, does superb work with the set pieces from the ruined house the East lives in to the more polished office and homes that Jane lives in when she‘s not undercover.

Costume designer Jenny Gering does nice work with the costumes from the polished clothes the East wears when they go undercover to the more ragged look when they‘re back at their secret home. Sound editor Andrew DeCristofaro does terrific work with the sound from the atmosphere of some of the antics the gang do to the quietness of the forest locations and where Jane lives. The film’s music by Halli Cauthery, with score themes by Harry Gregson-Williams, is wonderful for its mixture of electronic music and orchestral music to play into the film‘s suspense and drama.

The casting by Ronna Kress includes some notable small roles from Hillary Baack as a deaf-member of the East that Jane/Sarah befriends, Aldis Hodge as an aggressive member of the East, Han Soto as Sharon’s assistant, Jason Ritter as Jane’s husband, and Julia Ormond in a superb performance as a corporate official who deals with the same side effects that she’s been given during an attack by the East. Toby Kebbell is excellent as a doctor named Doc who deals with his illness as well as give reasons into why he became ill and his thirst for vengeance. Shiloh Fernandez is pretty terrible as the East member Luca as he looks like he just got out of a emo concert with too much eyeliner as he sometimes over acts in some intense scenes or looks like he’s about to take a shit.

Patricia Clarkson is amazing as Jane’s boss Sharon who keeps tabs on what Jane does while offering advice about getting to close and such. Ellen Page is fantastic as Izzy as this young woman who is wary about Jane joining the group only to have moment in the second half which reveals her reasons for being in the East. Alexander Skarsgard is brilliant as the leader of the East in Benji as a man who is determined to bring down corporations as there’s more to him than just some ragged, charismatic leader as Skarsgard brings this sense of humility and brooding persona to his role. Finally, there’s Brit Marling in an incredible performance as Jane/Sarah as an undercover agent trying to join the East and see what they’re up to as she becomes conflicted in doing her job as well as helping the East as it’s a role that is very understated yet engaging from Marling.

The East is a fantastic film from Zal Batmanglij that features remarkable performances from Brit Marling, Alexander Skarsgard, Ellen Page, and Patricia Clarkson. While it does have some conventional elements that is expected in a suspense-thriller, the film does offer some key insight into the world of eco-terrorism and their motives while adding some human elements into the story. In the end, The East is an extraordinarily powerful film from Zal Batmanglij.

Zal Batmanglij Films: (The Recordist) - Sound of My Voice

I missed the screening of this at my local film fest a couple of yrs ago. I like Brit Marling from the two films I saw her in so far, I might give this a rent on her account. Nice to hear you think this is fantastic.

While I prefer Sound of My Voice, I do recommend this film as a solid thriller as it does have a lot of ideas about eco-terrorism while it's more about characters than ideas.

I thought this was an interesting story, and Brit Marling did a great job. I wasn't as thrilled by Alexander Skarsgard and think the story lost a bit of steam in the last act. Still, I found it a bit stronger than Sound of My Voice.

@Dan Heaton-It did get a bit conventional in the third act but I still enjoyed it though I prefer Sound of My Voice as I felt it was a more original film.