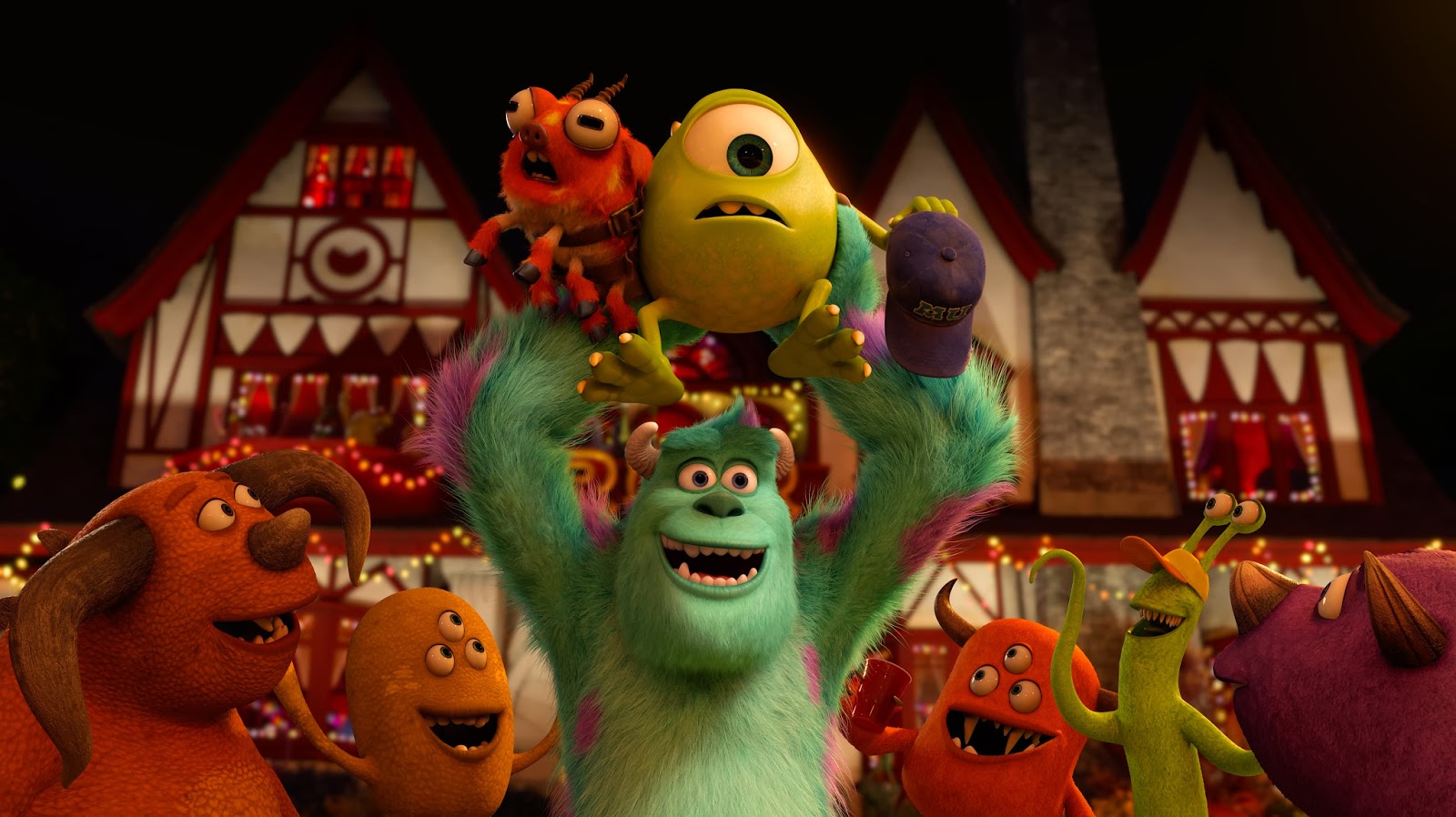 Directed by Dan Scanlon and written by Scanlon, Daniel Gerson, and Robert L. Baird, Monsters University is a prequel film to 2001’s Monsters Inc. in which Mike Wazowski meets Sulley at Monsters University where they start out as rivals and later become friends. It’s a film that explores two different monsters trying to find themselves in college and hope to make it into the big leagues as Billy Crystal and John Goodman respectively reprise their roles as Mike and Sulley as does Steve Buscemi as Randall. Also featuring the voices of Joel Murray, Sean Hayes, Dave Foley, Peter Sohn, Nathan Fillion, Charlie Day, Aubrey Plaza, Tyler Labine, Alfred Molina, and Helen Mirren as Dean Abigail Hardscrabble. Monsters University is a witty and enjoyable film from Dan Scanlon and Pixar Animation Studios.

The film is about how Mike Wazowski and James “Sulley” Sullivan became friends as they first met as freshmen college students at the prestigious Monsters University where they started out as rivals. Especially as Wazowski’s roommate was none other than future nemesis in Randall Boggs where they were friends at first. Yet, it’s a film where both Mike and Sulley not only become friends through a series of unfortunate events as they try to major the Scare program at the university. It’s also in how they try to get back into the program by being part of the annual Scare Games where they reluctantly team up with a fraternity full of outcasts to compete with other fraternities and sororities. During that process, the two would become friends but also realize how much they need each other to make it in the big leagues.

The film’s screenplay definitely explore a lot of the motivations and complexities of the two characters as Mike had always wanted to be a scarer since he was a kid during a school field trip as he studied hard to get to Monsters University. Despite his knowledge and determination to be a scarer in the Scare program, what he lacks is the look to really be scary. While Sulley has that look and the skills to be a scarer as he comes from a family of scarers, he doesn’t have the patience to learn which makes him arrogant and foolish. Due to an incident in a final program, the two are kicked out of the program where they reluctantly become part of this fraternity full of oddballs that don’t look or act scary. With Mike’s determination and Sulley’s natural ability, the two would make Oozma Kappa not just the surprise underdogs but also find a brotherhood that Mike and Sulley would later cherish.

Dan Scanlon’s direction is definitely filled with a lot of the ideas that is expected in a college film with frat parties and such. Much of it is full of humor and hijinks while it is balanced by drama and moments that help shape the characters and the story. Much of it involves images that play into the building friendship between Mike and Sulley while adding a few references of things to come in Monsters Inc. that would include the seeds of the eventual rivalry between Sulley and Randall. With the help of animation directors Andrew Gordon and Robert H. Huss, the look of the animation is definitely lively as it’s definitely what is expected from the animation team at Pixar with Scanlon providing lots of interesting framing and such to play into the humor and drama. Overall, Scanlon creates a very solid and entertaining film about two different monsters who become best friends in college.

Cinematographers Matt Aspbury and Jean-Claude Kalache do amazing work with some of the lighting schemes for some of the film‘s interior settings to add to the visual flair of the film. Editor Greg Synder does fantastic work with the editing in terms of creating a few montages and rhythmic cuts to play into the film‘s humor and party atmosphere. Production designer Ricky Nievra does brilliant work with the look of the University where it has this Ivy League look but also a world that is like a party and an institution to learn.

Sound designer Tom Myers does superb work with the film‘s sound to play into the sound effects that occur in some of the games as well as the places the monsters go to. The film’s music by Randy Newman is excellent for its mixture of low-key and suspenseful orchestral music to a lot of the playful drumline music of colleges as the soundtrack includes a mix of pop, electronic music, and metal music from the band Mastodon.

The voice casting by Natalie Lyon and Kevin Reher is incredible as it features an amazing ensemble that features voice appearances from Pixar regulars John Ratzenberger as the Yeti, Bonnie Hunt as young Mike’s schoolteacher, and Bob Peterson as Roz. Other notable small voice roles include Bobby Moynihan as the Roar Omega Roar member Chet, Beth Behrs as the Python Nu Kappa sorority girls, John Krasinski as a top-scarer that the young Mike meets, Tyler Labine and Aubrey Plaza as the Greek Council leaders hosting the Scare Games, Noah Johnston as the young Mike, Bill Hader as a slug student trying to get to class, and Julia Sweeney as Squishy’s sweet mother Sherri who loves to clean and listen to Mastodon. Nathan Fillion is terrific as the Roar Kappa Roar fraternity leader who is arrogant as the quintessential jock while Steve Buscemi is excellent in reprising his role as the slick and skillful Randy who starts out as a nerd to a member of the Roar Omega Roar fraternity.

Alfred Molina is superb as scare professor Derek Knight who looks at what kind of skills that Mike and Sulley have early on and see if it can elevate them. Helen Mirren is amazing as Dean Hardscrabble as this no-nonsense monster who knows who has what it takes to be a scarer as she watches over what Mike and Sulley can do to see if they can prove her wrong. In the roles of the Oozma Kappa fraternity members, there’s Joel Murray as the middle-aged octopus ex-salesman Don Carlton, Sean Hayes and Dave Foley as the two-headed twin brother monster Terri and Terry Perry, Charlie Day as the wild and furry Art, and Peter Sohn as the very unconventional Squishy as they’re all fantastic in their roles. Finally, there’s Billy Crystal and John Goodman in brilliant performances in their respective roles as Mike Wazowski and James “Sulley” Sullivan as they bring that sense of fun and complexity that makes them so endearing to watch as a reminder into why they were a great duo in Monsters Inc.

Monsters University is an excellent film from Dan Scanlon and Pixar Animation Studios. While it may not reach the heights as its predecessor or other films of Pixar, it is still an entertaining and heartfelt film that has all of the tropes that made Pixar one of the best animation studios ever. Even as it’s a film that just wants to give its audience something to enjoy and have characters to root for. In the end, Monsters University is a superb film from Dan Scanlon and Pixar.

I was skeptical about this one as I LOVE Monsters Inc, but I was pleasantly surprised! I thought the story was great, touching and funny and relatable as well. LOVE the voice cast, apart from Crystal and Goodman who are perfect, I like Alfred Molina and Helen Mirren who I agree is amazing as Dean Hardscrabble!

I was surprised by it as I was entertained and engaged by the film. Plus, I just love those characters and the actors doing the voices. I wouldn't mind have another film with Mike and Sulley. I just love those guys.

I really liked this one, even more the second time around. I do kind of love that it was Oscar snubbed, not because The Croods was better (it wasn't) but because it shows that Pixar is not infallible, and maybe the haters will lay off a little now.

@Fisti-I didn't mind the snub though I think this film was much better than one of the nominees. It's just a fun little movie and I think Pixar will find a way to get itself back on top as Disney Animation and some of the stuff from Dreamworks Animation is starting to put out some quality films.