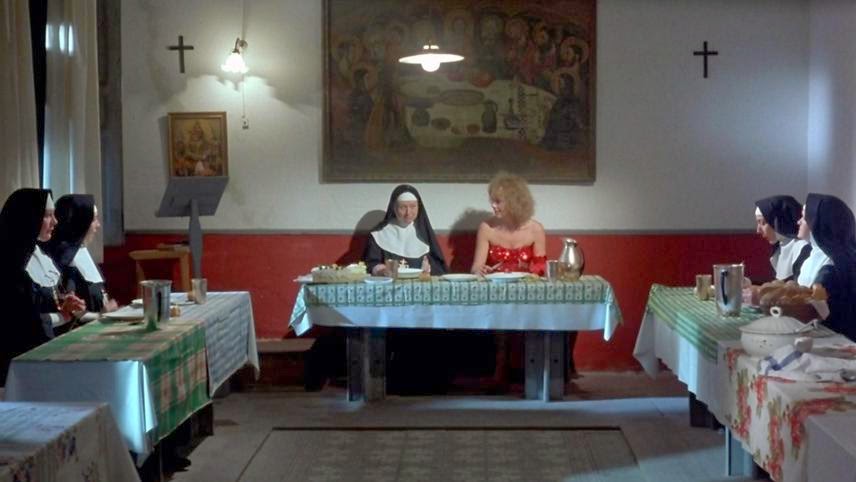 Written and directed by Pedro Almodovar, Entre tinieblas (Dark Habits) is the story about a cabaret singer who finds refuge in a convent filled with eccentric nuns. The film is an exploration into the world of the Catholic church as well as growing sense of moral bankruptcy that is emerging in Spain as it’s all presented in a satirical form. Starring Cristina Sanchez Pascual, Julietta Serrano, Carmen Maura, Chus Lampreave, Cecilia Roth, and Marisa Paredes. Entre tinieblas is a ravishing film from Pedro Almodovar.

The film is this very offbeat story about a cabaret singer who seeks refuge at a convent following the drug overdose death of her boyfriend. At this convent that is going through financial trouble, it is run by nuns who each carry bad habits as they try to help others redeem themselves while struggling with their own habits. Leading the pack is a Mother Superior (Julietta Serrano) who is a lesbian that likes to do cocaine and heroin as she lives in the convent with a chaplain (Manuel Zaro) who likes to sew elaborate robes with a nun named Sister Snake (Lina Canalejas). Other nuns include the neat-freak Sister Damned (Carmen Maura) who has a pet tiger, a former murderess who likes to cook and do LSD occasionally named Sister Manure (Marisa Paredes), and an aging nun named Sister Sewer Rat (Chus Lampreave) who secretly writes smutty novels. It’s all part of a world that is removed from society as these women try to maintain some semblance of faith in a changing world.

Pedro Almodovar’s screenplay doesn’t just explore a sense of moral bankruptcy in Spain but also a world where the Catholic Church seems to find ways to maintain some relevancy in a new world but there are those that prevent some nuns from trying to be a part of the new world. Mother Superior and her convent knows what is going on yet they’re dealing with their old General Mother Superior dying as well as the possible clothing of their own convent. By taking in the singer Yolanda (Christina Sanchez Pascual), it gives the nuns a chance to help someone yet Yolanda and the Mother Superior share an affinity for cocaine and heroin. One aspect of the script that serves as motivation for the nuns to try and save their convent involves dealing with their late benefactor’s wife (Mary Carrillo) who has no interest in saving the convent until Mother Superior would gain information about the woman’s late daughter that she would use as blackmail.

Almodovar’s direction has this air of style that recalls the works of such filmmakers as Robert Bresson, Luis Bunuel, Rainer Werner Fassbinder, Federico Fellini, and Douglas Sirk in not just his approach to melodrama but also in the way he is willing to provoke ideas. Notably in the way he has the nuns behave in a casual manner that is very offbeat as well as create something that is akin to the melodramas of Sirk and Fassbinder. The direction also has Almodovar create some intoxicating imagery that is rich with dazzling colors and lighting schemes to play into this strange world the nuns live in that seems to reflect some of the craziness that goes on in Madrid. With its approach to tracking and dolly shots along with some high and low camera angles, there is a fluidity to what Almodovar wants to do as well as create something that is low-key yet sensationalistic in a climatic party that the nuns hold for Mother Superior that would have face her new superior. It would be a moment where the fate of Yolanda and the nuns would come into play as it would be told in the form of classic melodrama. Overall, Almodovar crafts an evocative and powerful film about a convent of nuns trying to find themselves in a new world.

Cinematographer Angel Luis Fernandez does phenomenal work with the film‘s gorgeous and colorful cinematography from the exotic vibrancy of many of the film‘s daytime interior scenes to some of the scenes set at night to play into the richness of the colors with additional help from some unique lighting schemes. Editor Jose Salcedo does amazing work with the film‘s editing with its use of jump-cuts, montages, and dissolves to play into a sense of style that has an element of surrealism in some parts of the film such as Sister Manure‘s acid trips. Production designers Roman Arango and Pin Morales, with set decorator Antonio Lopez, do fantastic work with set pieces from the look of the room that Yolanda stays in to the main hall of the convent as well as the decorations for the climatic party scene.

Costume designers Francis Montesinos and Teresa Nieto do brilliant work with the costumes from the look of the nun uniforms to the lavish robes that the Chaplain and Sister Snake create that Yolanda would wear. The sound work of Armin Fausten and Martin Muller is superb for the intimacy that occurs in the convent as well as the sense of vibrancy in the party scenes. The music by Cam Espana is wonderful for its mixture of somber orchestral pieces to the use of sentimental pop songs that Yolanda and the Mother Superior love.

The film’s cast includes some noteworthy small performances from Marisa Tejada as a drug dealing-friend of Mother Superior, Eva Siva as Sister Sewer Rat’s rich sister, Will More as Yolanda’s boyfriend at the beginning of the film, and Cecilia Roth as a former lover of Mother Superior who briefly returns due to trouble. Other notable small roles include Berta Riaza as the new General Mother Superior who appears late in the film, Mary Carrillo as the benefactor’s wife who isn’t interested in funding the convent, Manuel Zaro as the convent’s Chaplain who loves to sew and watch old films, and Lina Canalejas as Sister Snake who is a master at sewing as she tries to keep the peace within the convent.

Chus Lampreave is amazing as the very comical Sister Sewer Rat as this aging nun who tries to keep her secret writing life a secret while doing odd things. Carmen Maura is excellent as Sister Damned as this very eccentric neat-freak who likes to feed and play bongos to her pet tiger whom she refers to as her son. Cristina Sanchez Pascual is terrific as the very troubled cabaret singer Yolanda who deals with the death of her boyfriend as well as her addiction as she tries to find redemption. Marisa Paredes is brilliant as the very troubled Sister Manure as this very destructive woman who likes to walk barefoot on broken glass, cook, and drop acid as she is someone trying to atone for her own sins. Finally, there’s Julietta Serrano in a marvelous performance as the Mother Superior as this drug-taking lesbian who falls in love with Yolanda as she tries to help her as well as do whatever it takes to save her convent as it’s a pretty wild performance from the actress.

Entre tinieblas is a remarkable film from Pedro Almodovar that features brilliant performances from his group of regular actresses in Julietta Serrano, Marisa Parades, Chus Lampreave, and Carmen Maura. The film is definitely stylish in terms of its colorful imagery and set pieces as well as being provocative in the way it takes a few shots at religion and society. In the end, Entre tinieblas is a gorgeous and sensational film from Pedro Almodovar.

Pedro Almodovar Films: Pepi, Luci, Bom - Labyrinth of Passion - What Have I Done to Deserve This? - Matador - Law of Desire - Women on the Verge of a Nervous Breakdown - Tie Me Up! Tie Me Down! - High Heels - Kika - The Flower of My Secret - Live Flesh - All About My Mother - Talk to Her - Bad Education - Volver - Broken Embraces - The Skin I Live In - I'm So Excited! - Julieta - Pain & Glory - (The Human Voice (2020 short film)) - (Parallel Mothers)

Hi Steven, I have to admit I'm not familiar w/ Almodovar's work at all. Does his films have a lot of spiritual themes like this one? I might venture into his work at some point.

Not really. Based on what I've seen so far. He's really more of a feminist filmmaker of sorts but with a bad-boy edge as this film is really being a provocateur but also with a sense of camp. I'll divulge more about his work in September when I do my Auteurs piece on him as I have about 5 more of films to watch for the rest of the year.