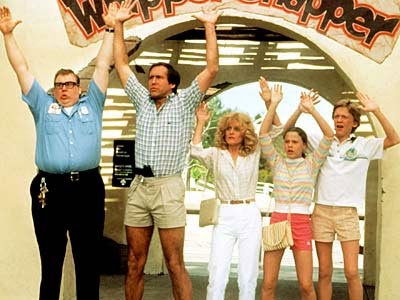 Directed by Harold Ramis and written by John Hughes, National Lampoon’s Vacation is the story of a family who travel cross-country from Chicago to California to go to the famed amusement park known as Walley World where everything goes from bad-to-worse during the journey. Based on a short story by John Hughes with additional contributions from Ramis and Chevy Chase who plays the lead role of Clark W. Griswold. The film is an unusual comedy that explores a family’s ill-fated journey where they have to deal with misdirection, a troubled station wagon, hick relatives, a very mean aunt, and a hot lady driving a Ferrari. Also starring Beverly D’Angelo, Anthony Michael Hall, Dana Barron, Imogene Coca, Randy Quaid, Christie Brinkley, and John Candy. National Lampoon’s Vacation is truly one of the greatest comedies ever created.

Family vacations is a chance for parents and their children to enjoy time with one another and do things like go to Disneyland or Universal Studios theme parks. What Clark W. Griswold and his family want to do is to go the happiest play in the world in Walley World and meet the mascot Marty Moose by traveling from Chicago to Los Angeles. By going cross-country on a very troubled station wagon, a lot goes wrong along the way as it would play to some of the series of misfortunes that occurs in the film. All of which involves a lot of laughs and all sorts of crazy shit for Clark, his wife Ellen (Beverly D. Angelo), son Rusty (Anthony Michael Hall), and daughter Audrey (Dana Barron). Add the very bitchy Aunt Edna (Imogene Coca) who joins them during a stop in Kansas to drop her off to Phoenix.

John Hughes’ screenplay is based on his own real life experience about his own ill-fated trip to Disneyland where it all plays to all of the unfortunate things that can go wrong in a cross-country road trip through America. Throughout all of this ordeal, there is this strange optimism that is prevalent in Clark Griswold as he wants his family to experience a kind of journey that every American family has done. Even as he deals with all sorts of bad shit and a hot blonde (Christie Brinkley) driving a red Ferrari 308 GTS who tempts him from leaving his family. Yet, there’s Ellen who is the most grounded person of the family as she tries to remain realistic and deal with the chaos on the road as she even makes Clark visit her cousin Catherine (Miriam Flynn) and Catherine’s oddball husband Eddie (Randy Quaid). One aspect of the script that works isn’t its use of language but also in some of the dialogue that is largely improvised and full of wit that just adds to the brilliance of the film.

Harold Ramis’ direction is pretty simple in terms of the compositions and scenes he creates where he’s not doing anything flashy or go for something that is visually-astonishing. Instead, Ramis just create something that does feel like a road film where it’s shot on various locations in the U.S. with some wide shots and medium shots of the locations. By going into different locations in the U.S. from Chicago to Los Angeles, it adds to the sense of unpredictability to the film as well as some of its humor that feels loose and natural. Even in some of the moments that involve Clark being wooed by the hot lady during a picnic or the moment he finds himself in the ghetto of St. Louis and asks for directions unaware that his hubcaps are being stolen. It would eventually lead to the Griswolds finally going to Walley World as it is a climax that pays off and more. Overall, Ramis crafts a very entertaining and heartfelt comedy about a family road trip to Walley World.

Cinematographer Victor J. Kemper does excellent work with the cinematography from the vibrant look of the daytime interior/exterior settings to the simple lighting schemes for some of the film‘s nighttime scenes. Editor Pembroke J. Herring does nice work with the editing as it‘s very straightforward while using some slow-motion moments to play into some of the funnier moments like a homage to Chariots of Fire. Production designer Jack T. Collis and set decorator Joe D. Mitchell do terrific work with some of the set pieces from the different hotels and homes the Griswolds stay at to the look of Walley World.

Sound editors Bub Asman, Robert G. Henderson, and Alan Robert Murray do superb work with the sound in some of the sound effects that is created in the film. The film’s music by Ralph Burns is wonderful for its light-hearted orchestral score that plays to the film’s humor while its soundtrack features songs by June Pointer, Vanity 6, Nicollete Larson, the Fleetwoods, the Ramones, and a couple of original songs by Lindsey Buckingham including the theme song Holiday Road.

The casting by Susan Arnold and Phyllis Huffman is fantastic for the ensemble that is created as well as cameo appearances from Eugene Levy as a shady car salesman, John Diehl and Mickey Jones as a couple of sleazy mechanics, James Keach as a motorcycle cop, Brian Doyle-Murray as the Kamp Komfort clerk, and Eddie Bracken as Walley World founder Roy Walley. Other notable small roles include John P. Navin Jr. and a young Jane Krakowski as Rusty and Audrey’s cousins, John Candy in a hilarious performance as a Walley World security guard, and Christie Brinkley as the hot blonde in a Ferrari. Miriam Flynn is very good as the very kind cousin Catherine while Randy Quaid is a total hoot as the inbred cousin Eddie. Imogene Coca is great as the very mean and cold Aunt Edna who always take shots at Clark and make him do all sorts of shit while having no problem eating a sandwich drenched in dog piss.

Dana Barron and Anthony Michael Hall are amazing in their respective roles as Audrey and Rusty Griswold as two teens trying to deal with the chaos of the vacation as well as trying to get anything from pot to booze to cope while doing some funny things along the way. Beverly D’Angelo is great as Ellen Griswold as the realist of the family who tries to handle everything that is happening while being the voice of reason as she also has some funny lines. Finally, there’s Chevy Chase in an iconic performance as Clark W. Griswold as this very optimistic father who tries to give his family the greatest vacation ever no matter how bad things are as he says all sorts of funny things and so some funny shit as it’s definitely a performance for the ages.

National Lampoon’s Vacation is an outstanding film from Harold Ramis and screenwriter John Hughes. Thanks to a great cast and its theme on family along with a witty approach to the road film. It’s not just a film that stands as a touchstone of classic 80s comedies but also a film that has something for everyone as it’s a family film and a low-brow comedy rolled up into one. In the end, National Lampoon’s Vacation is tremendous film from the late Harold Ramis.

I didn't realize John Hughes wrote this one! I always stop and watch whenever this plays on tv, though I don't think I've ever seen it entirely.

I do think it's a hoot though. Boy, looking at the list at the bottom, I didn't know Ramis did Multiplicity, I LOVE that movie. I find it so hilarious & Michael Keaton is such a hoot.