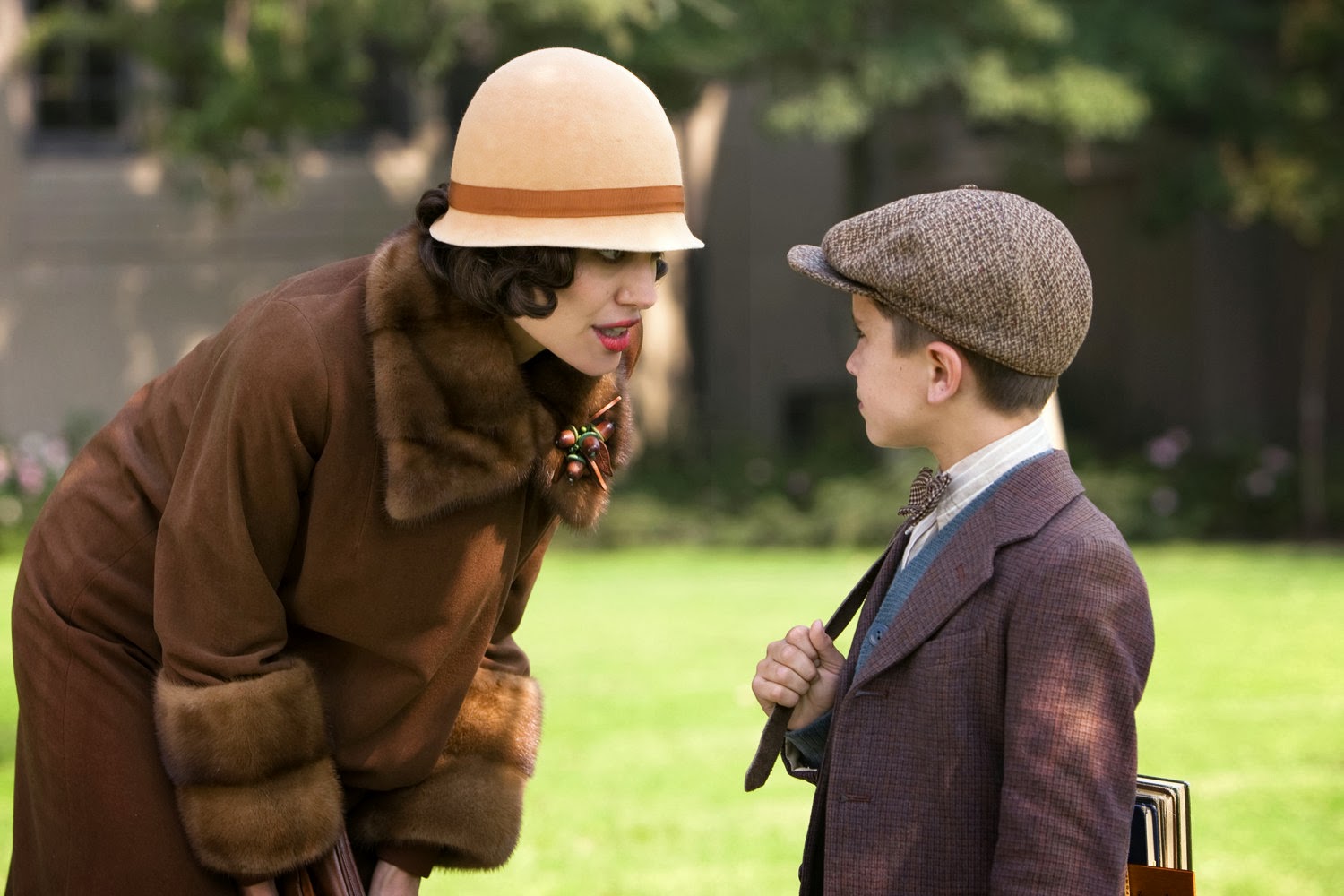 Directed by Clint Eastwood and written by J. Michael Straczynski, Changeling is the story of a woman in late 1920s Los Angeles whose son is kidnapped only for the police to claim they found her son as the boy turns out not to be her son. Based on a true story, the film is about a woman whose search for her kidnapped child leads her to team with a pastor to fight against the corruption of the LAPD amid accusations that she's unfit while one detective makes a grim discovery about what might've happened to the boy. Starring Angelina Jolie, Jeffrey Donovan, Jason Butler Harner, Michael Kelly, Geoff Pierson, Colm Feore, Amy Ryan, and John Malkovich. Changeling is a harrowing yet powerful drama from Clint Eastwood and company.

The film takes place in 1928 Los Angeles where Christine Collins (Angelina Jolie) is a single mother who raises her 9-year-old son Walter (Gattlin Griffith) while working as a phone-line supervisor. When he doesn't return home one day as she believes he's kidnapped, she reports the incident to the LAPD where a five-month search for the boy had the LAPD claim they found the boy yet it's not Walter as Christine reluctantly takes the boy as she starts to question the LAPD. Turning to the Reverend Gustav Briegleb (John Malkovich) who had been critical of the LAPD, Christine finds herself in trouble as she is taken to a psychiatric ward while a detective named Lester Ybarra makes a chilling discovery during an assignment to deport a 15-year old boy back to Canada. Through Ybarra's discovery and Reverend Briegleb's help, Christine would go on a mission to fight the LAPD and to try and find her son who was supposedly kidnapped by a psychotic named Gordon Northcott (Jason Butler Harner).

The film is about, in its simplest terms, a mother just wanting to know where her son is. Yet, when the people she is relying on doesn't help her out at all and challenges their authority. She turns to people in her community where she fights against corruption in seeking out the truth, even if the conclusion is something horrible. J. Michael Straczynski's script is definitely brilliant in its study of character and corruption while revealing some ugly truth into some gruesome murders that might not just affect Christine Collins. Though it's not perfect due to the aftermath of the trials with a lot of set-ups for the ending where it's overdrawn. The script does work in unveiling how a woman just wants to fight for what's right with help from a religious leader who just wants the same thing.

A film like this could've been told conventionally in the hands of a director who wants to presents something that could be sappy or very drawn out. In the hands of someone like Clint Eastwood, it becomes something far more interesting with characters to root for and themes that audiences can understand. Eastwood's direction is truly superb in its nuance for the period as it's shot mostly in California while presenting an idea of what it was like then. Eastwood and ends the film with the look shot in black-and-white to give it an old time feel. Yet, his angles and compositions in presenting a scene are told in a modern style while paying homage to older film styles. For some of the film's dramatic, emotional scenes, Eastwood prefers to let the drama unfold without any forced manipulation as he's often been accused of with some of his films.

Eastwood's reputation in directing his actors or lack-thereof really bring the performances of his actors to have a sense of freedom and authenticity. The approach works very well in his staging of the drama while allowing the camera to capture every moment. Even when showing that even characters like Christine and Reverend Briegleb to be flawed as well yet have the audience still root for them. Then, there's parts of the ending that suggests Eastwood's political leanings might come off as a little conservative for some audiences. Yet, in what wanted to say about that specific scene in relation to what goes in the film. Whether you agree with him or not, he does have some points. Then there's the film's ending which can be described as ambiguous but the result does leave something that's open but also with a glimmer of hope. Overall, Eastwood does create a drama that is captivating as the man is still in the top of his game as a director.

Cinematographer Tom Stern does excellent work in the usual tinted, greenish look of the film with some amazing shading in some of the film's interior settings as it brings a sense of atmosphere for its dramatic moments. Stern's camera work in the exteriors in some of the LA shots in the rain are done with a wonderful shade of blue-green while the scenes in the desert is gorgeous with its light-colored look. Editors Joel Cox and Gary D. Roach do excellent work in the smoothness of the film's cutting along with opening and closing dissolve shots from black-and-white to color and vice versa. The editing for some of the film's more heightened dramatic sequences has some swift, transitional cuts and jump cuts as the editing is excellent overall.

Production designer James J. Murakami with set decorator Gary Fettis and Patrick M. Sullivan Jr., do great work in the film's interior designs of Christine's home, the look of the church and police departments. The film also had an exterior design on a restaurant shack where the false boy was found where the shack is named Bummy's after Eastwood's late production designer Henry Bumstead. Visual effects supervisor Michael Owens do some great work in some of the redesign on some of the film's exterior LA settings to change it from today's Los Angeles to late 1920s-1930s LA. Costume designer Deborah Hopper does amazing work in the film's costumes, notably the look of the women's clothes with the hats, dresses, shoes, and such. There's a real authenticity to the film's look and style as Hopper's work is truly superb.

Sound editor Alan Robert Murray does great work in the sound in the way the trolleys sound along with objects and other things. Murray's work is excellent for the atmosphere it brings in each scene. For the film's score written by Clint Eastwood with arrangements by his son Kyle and Michael Eastman, the music is mostly orchestral with low, sweeping arrangement to underscore the drama. Yet, with mostly a piano and an acoustic guitar accompaniment. The music mostly leans towards jazz music with a trumpet to pay homage to the 1920s.

The cast assembled by Ellen Chenoweth, is superb with memorable appearances from Jeffrey Hutchinson and Lily Knight as parents of a missing child, Riki Lindhome as an examination nurse, Michelle Martin as phone operator, Peter Geraty as a doctor examining the fake boy, Pamela Dunlap as Walter's teacher, John Harrington Bland as a dentist, Reed Birney as the LA mayor, and a cameo from Clint's daughter Morgan as a neighborhood girl. Eddie Alderson is very good as Sanford, the boy who confesses to what he and his cousin did that would break a huge case that might involve Walter's disappearance. Frank Wood is also good as Ben Harris, Christine's supervisor at the phone service office who sympathizes with her situation as he also helps her. Devon Conti is very good as the fake boy who claims to be Walter with a smarmy attitude until he makes his confession. Gattlin Griffith is excellent in his small role as the real Walter Collins, a good kid who ends up getting captured while early in the film. He has a great scene with Jolie about fighting that would be the rallying call for the entire film.

Denis O'Hare is very good as the corruptive doctor at the mental ward who tries to make Christine sign something that she knows would discredit her. Jason Butler Harner is great as Gordon Northcott, the man who is revealed to be the murderer of many children as he's a guy with a smarmy smile that might reveal the fate of Walter Collins. Colm Feore is good as the chief of police who is trying to use the law for his own gain only to be faced with embarrassment. Amy Ryan is great as Carol Dexter, a prostitute who befriends Christine at a mental ward as she gives her lessons on how to survive the ward while proving that she can be pretty tough. Michael Kelly is great as Detective Ybarra, the good cop who uncovers a gruesome case and becomes one of the few allies in the LAPD for Christine.

Jeffrey Donovan is excellent as Captain Jones, the man who would set the course for Christine's fight against corruption as a police officer who is more about showing off his authority than doing the right thing. John Malkovich is superb as Reverend Gustav Briegleb, a local pastor with a radio broadcast who is set out to do the right thing for his community. While like many preachers, he might be a bit preachy, but Malkovich does bring a sense of comfort and an unrelenting presence to his performance as it stands out as one of his best. It's an amazing performance from Malkovich who should be singled out as a community leader wanting to do what's right for his community and its people.

Finally, there's Angelina Jolie in an amazing performance as Christine Collins. Following her knockout, dramatic performance in Michael Winterbottom's 2007 film A Mighty Heart, Jolie returns to what she does best as she plays a character that she can relate to being that she is a mother. Jolie goes for restraint than melodrama in most of what she does in her performance as she proves that she can be tough while when it comes to her son. Her restraint in the emotions is powerful as it's definitely a performance that reminds audiences in why she's a really good actress instead of the high-profile star that she's often known for.

Changeling is a powerful and intense film from Clint Eastwood. Thanks to the great performances from Angelina Jolie and John Malkovich, it's a film that really shows the power of what people can do when they're faced with injustice. Fans of Eastwood's film will no doubt enjoy in what the director can despite a few flaws in the film. In the end, Changeling is a film that is worth seeing for its performances, 1920s period look, and the understated, atmospheric direction of Clint Eastwood.

I have to say, while I didn't absolutely love this, it was FAR better than the critics and cinephiles constantly bashing it made it out to be. In fact, even Jolie was really good, and I remember her Oscar nom being met with disdain by so many.

I really liked it. It was flawed due to the over-drawn ending. Yet, Jolie had the best line in that film.

FUCK YOU AND THE HORSE YOU RODE IN ON!!!!

I remember when I saw the film in the theaters and when she said that line. The audience clapped. That was awesome.

I love this movie. Jolie was so great, I remember thinking the entire time that the real Jolie wouldn't be so timid and she probably would've punched anyone who tried to give her a replacement child. The only thing I didn't like was Jeffrey Donovan. His accent changed half way through the film and I thought he was kind of awful.

@Brittani Burnham-It's been a long time since I've seen the film and I think one of the reasons why I disliked Donovan in that film because he was so good in playing the asshole. I'm not sure if I noticed if he changed his accent. I need to see it again.