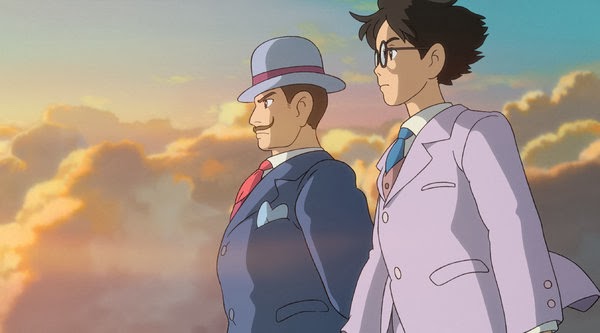 Written and directed by Hayao Miyazaki from his manga, Kaze Tachinu (The Wind Rises) is a fictionalized bio-pic about the life of Jiro Horikoshi as he was the man that designed the Mitsubishi A5M and its successor A6M Zero that played a key part in World War II. The film is a more dream-like portrait about Horikoshi’s life with some dramatic embellishments while not deviating too much from the real-life story. For the American-dubbed version of the film that is supervised by Gary Rydstrom, the voice cast includes Joseph Gordon-Levitt, Emily Blunt, John Krasinski, William H. Macy, Elijah Wood, Stanley Tucci, Mae Whitman, Mandy Patinkin, Jennifer Grey, and Werner Herzog. Kaze Tachinu is a mesmerizing film from Studio Ghibli and Hayao Miyazaki.

The film is fictionalized bio-pic about the life of Jiro Horikoshi that is presented in a dream-like fashion where it goes from Horikoshi as a young boy to becoming the man who would design the Mitsubishi A5M and its successor the A6M Zero that would become the key planes used in World War II. With a mixture of reality and a dream-like world, the film plays into Horikoshi’s desire to create the ultimate airplane that can endure wind resistance and not be intimidated by the advanced technology of other countries. Even as Horikishi (Joseph Gordon-Levitt) seeks the advice of the famed Italian plane designer Giovanni Battista Caproni (Stanley Tucci) in his dreams. Through Hayao Miyazaki’s screenplay, the film does have a conventional narrative in terms of structure that plays to Horikoshi’s life but he infuses with bits of surrealism and dreamy textures to make it much more interesting.

Notably as the film plays into key events that would mark Horikoshi’s development from his encounter at the 1923 Great Kanto Earthquake as well as his trip to Germany to see how the Germans created their airplanes. These moments would drive Horikoshi to see if he can create a war plane for Japan that would define them as they endure the Great Depression and such. While there would be some failures along the way, Hirokoshi would eventually find more inspiration when he re-meets Naoko (Emily Blunt) whom he had met years ago during a train ride with her sister where they encountered the Great Kanto Earthquake of 1923. His relationship with Naoko would prove to be a major catalyst to Horikoshi’s development as a man and as an engineer where he would try to balance both roles and later deal with his what he’s achieved.

Miyazaki’s direction is definitely dazzling in the way he creates Japan in the early half of the 20th Century as it’s a world that is trying to catch up with the modern world. Especially as he infuses bits of surrealism into the dream sequences that Horikoshi would have as it features some vast scenes of planes flying around and all sorts of things. Notably in the designs of the planes and how imaginative they look as it plays to what Horikoshi would want to create. The look of Japan from its different backgrounds of mountains, forests, and cities are presented with such great detail as there’s aspects in the background that are just as mesmerizing to look at. Even in the design of the characters which have all of the quintessential elements that is expected in Miyazaki’s work as an animator.

With the aid of cinematographer Atsushi Okui to help in the lighting where much of the animation is in 2-D hand drawn animated style with some computer-based animation for some of the backgrounds. Miyazaki creates something that is truly rich in scope but also infuse it with such artistry in the way the planes are flown as well as the way nature is presented as if it has the feel of a live-action film. Even in some of the compositions and camera work where it has a sense of action but also some drama and humor that just adds to the beauty of the film. Overall, Miyazki creates a truly evocative and sensational film about a dreamer who would create one of the greatest designs for a plane despite the fact that it’s being used as an instrument of war

Editor Takeshi Seyama does amazing work with the film‘s editing in its approach to rhythm for some of its action scenes as well as the dream sequences as it features lots of jump-cuts and disjointed rhythmic cuts to play into that sense of surrealism. Sound designer Koji Kasamatsu and sound editor Gwendolyn Yates Whittle (for its English version) do fantastic work with the sound in creating some of the sound effects used in the film with Whittle providing some low sound textures for some of the English dialogue as background textures. The film’s music by Joe Hisaishi is brilliant for its mixture of lush orchestral pieces with some playful and offbeat music driven by accordions and string instruments.

For the film’s English-language version, the cast includes some contributions from Elijah Wood as a co-worker of Horikoshi, Jennifer Grey as Mrs. Kurokawa, Darren Criss as another worker in Katayama, Mandy Patinkin as one of Horikoshi’s top bosses, Mae Whitman as Horikoshi’s sister Kayo, Zach Callison as the young Horikoshi, William H. Macy as Naoko’s father, Edie Merman as Horikoshi’s mother, and Werner Herzog in a superb voice performance as a German tourist Horikoshi meets in a retreat in the famed Magic Mountains in Japan. Martin Short is very funny as the comical boss Mr. Kurokawa who provides some humor as well as some guidance for Horikoshi while Stanley Tucci is brilliant as the famed Italian plane designer Giovanni Battista Caproni as Tucci sports an Italian accent as he displays warmth and humor into the role of the man who would guide Horikoshi.

John Krasinski is excellent as the voice of Horikoshi’s close colleague Kiro Honjo who aids Horikoshi in some of the designs as he would create his own planes that would also revolutionize planes in Japan. Emily Blunt is wonderful as Naoko as this woman who Horikoshi would meet early on as a young girl and later as a woman who would provide an inspiration and drive for Horikoshi after some of the failures he had to deal with. Finally, there’s Joseph Gordon-Levitt doing fantastic voice work as Jiro Horikoshi as this young man who dreams of designing an airplane that would define Japan in all of its glory though he is aware of what they’re being used for as he hopes they can provide some meaning into his life.

Kaze Tachinu is a remarkable film from Studio Ghibli and Hayao Miyazaki. It’s a film that is filled with rich images and a captivating story that manages to be wondrous as well as somber for what Jiro Horikoshi wanted to make. While it has some dark elements, it is balanced by the themes of being a dreamer which makes the story far more engaging. If this film is to become Miyazaki’s final contribution to cinema, he at least goes out with a winner. In the end, Kaze Tachinu is a phenomenal film from Hayao Miyazaki and Studio Ghibli.

Hayao Miyazaki Films: (The Castle of Cagliostro) - (Nausicaa of the Valley of the Wind) - (Castle in the Sky) - My Neighbor Totoro - (Kiki’s Delivery Service) - (Porco Rosso) - (Princess Mononoke) - Spirited Away - (Howl’s Moving Castle) - (Ponyo) - (How Do You Live?)

Great review Steven! I'm even more curious to see this. I've only seen Spirited Away so far, and to be honest I'm not really into anime. That said I'm intrigued by this story and I might even see the dubbed version w/ this voice cast, though normally I abhor dubbed movies!

I don't like dubbed films either though with this film and Howl's Moving Castle which is the only other Miyazaki film I've seen. I'm willing to make an exception.