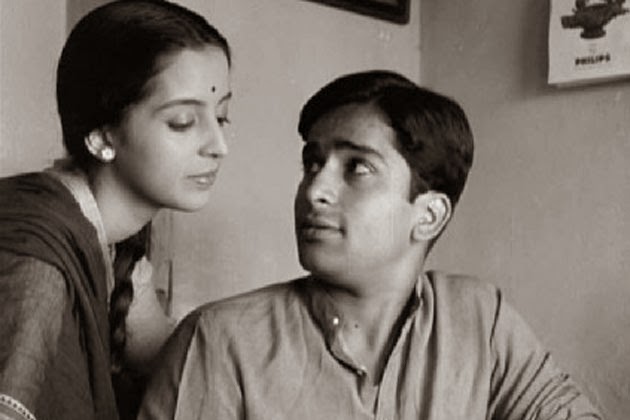 Directed by James Ivory and screenplay by Ivory and Ruth Prawer Jhabvala that is based on the novel by the latter, The Householder is the story about a Dehli college teacher whose recent arranged marriage to another woman gets into trouble as he tries to adjust to his new life as a married man. The film plays into the world of adulthood set in India as it marks the first of many films from the Merchant-Ivory company that would include producer Ismail Merchant. Starring Shashi Kapoor, Leela Naidu, and Durga Khote. The Householder is a superbly rich film from James Ivory.

When marriage first arrives to a new couple, it’s about two people trying to get to know each other and such as this film is about this college teacher in Dehli who tries to deal with his newfound life as a newlywed in an arranged marriage to a young woman. It’s a marriage wracked with difficulty which gets worse when the groom’s mother arrives observing and criticizing everything forcing him to deal with his role and what he wants in his life. Ruth Prawer Jhabvala’s script not only explores the difficulty of being newly married but also the expectations and sense of repression that Prem Sagar (Shashi Kapoor) is dealing with as the presence of his mother (Durga Khote) only causes trouble. Especially as she would make her new daughter-in-law Indu (Leela Naidu) very insecure while calling out on her husband as a mama’s boy. For Prem, the adjustment of being a newlywed and balancing it out with his work as a professor would force him to seek answers from many on what to do as it would be presented in a very simple narrative.

The direction of James Ivory is quite simple in the way he explores the sense of repression and expectations put upon a newlywed couple but also in how a man tries to find answers into dealing with his marriage. Much of the direction has Ivory shooting on location in Dehli where it’s this strange mix of a new world colliding with the old yet there are those seeking some answers in a spiritual form as Prem would meet an American visitor (Ernest Castaldo) who would be a catalyst for Prem’s personal journey. Many of the compositions that Ivory would create would be simple in terms of close-ups, medium shots, and some wide shots of the locations. All of which would play into the drama that would intensify throughout the film. Overall, Ivory creates a very compelling film about the newness of being married and the expectations that occurs in India.

Cinematographer Subrata Mitra does excellent work with the film‘s black-and-white photography to play into the look of Dehli as well as the way some of the nighttime interiors are shot. Editor Pran Meha, with additional contributions from Satyajit Ray, does nice work with the editing in creating some unique rhythmic cuts to play into some of the drama along with some stylish usage of dissolves. Costume designer Bettina Gill does terrific work with the clothes from the robes that the women wear to the clothes the men wear. The film’s music by Ustad Ali Akbar Khan and music supervisor Satyajit Ray is fantastic for its mixture of somber Indian orchestral music and some playful pieces that features additional contributions by Ali Akbar Khan and Jyotitindra Moitra where their pieces are featured in the opening moments of the film.

The film’s cast includes some notable small roles from Ernest Castaldo as an American-Indian tourist that Prem meets, Pahari Sanyal as a swami that Prem goes to late in the film, Romesh Tappar as the school principal that Prem works for, and Patsy Dance as a British tourist that Prem’s American friend was staying with. Durga Khote is wonderful as Prem’s very critical mother who always talks about how things were back then as she starts to be cruel towards Indu as she would make things uneasy for Prem. Leela Naidu is amazing as Indu as this young woman that is just trying to be a good wife while dealing with her mother-in-law as she becomes more insecure around her. Finally, there’s Shashi Kapoor in a superb performance as Prem where he brings in all of the anxieties and immaturity as a newlywed who tries to adjust to his new situation and the expectations to be a husband and a man of importance.

I haven't seen a lot of Merchant-Ivory films, so far only The Remains of the Day and A Room With a View. This one sounds intriguing, especially the cultural aspect of the story.

I'm new to the Merchant-Ivory films as the only ones I've seen are A Soldier's Daughter Never Cries, Jefferson in Paris, and Le Divorce. The last of which was OK.

I just saw Shakespeare Wallah which I really liked as I want to explore some of their work and re-watch the films I've seen from them but never really grasped upon. I thank Wes Anderson for opening my mind about these guys.