Originally Written and Posted at Epinions.com on 9/28/09. 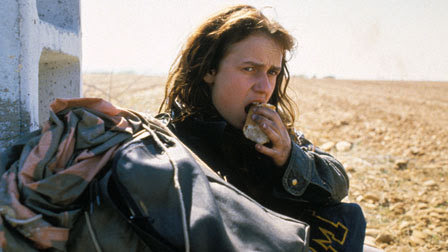 One of the premier directors in France, the Belgium-born Agnes Varda is known for her feminist take on films either fictional or documentary. While she was part of the French New Wave often collaborating with husband Jacques Demy, she was part of another French film movement in the Rive Gauche (Left Bank Cinema) with Alain Renais in relations to left-wing cinema. Making films from the 1960s through the 1970s, Varda scored a major hit with one of her fictional features called Sans toit ni loi which is commonly known in English as Vagabond.

Written and directed by Agnes Varda, Sans toit ni loi tells the story of a woman found frozen in a ditch during a cold winter in the South of France. Yet moments before her death, she would encounter various people she would meet during her road trip. A film that is filled with Varda's commentary on women and social issues with elements of a road film. It is considered to be one of her essential films of her prolific career. Starring Sandrine Bonnaire. Sans toit ni loi is a provocative, entrancing film from Agnes Varda.

A cold day in a farm near the South of France when a farmer (Christophe Alcazar) finds a frozen body in a ditch as people wondered who she is. Her name is Mona Bergeron (Sandrine Bonnaire) as she is hitchhiking all over the South of France looking for work, shelter, or whatever she comes across to. She rides briefly with a trucker (Patrick Schmidt), gets a free sandwich from a young man (Patrick Sokol), meets a woman (Katy Champaud), and works briefly for a mechanic (Pierre Imbert). After hiding out at an old castle that belongs to a man that a maid named Yolande (Yolande Moreau) works for along with an old lady. Mona briefly lives in the castle with another man as they steal things from the castle. Yet, when the things she stole weren't worth anything except for some spoons as she continues to go on the road and find work wherever she can.

Finding shelter and work at the home of some goat farmers, she lives their briefly but doesn't work much as she leaves where she meets a rich woman on the road. The woman gives her a ride throughout the place as she is a professor (Macha Meril) who loves trees. The woman recalls meeting Mona, though never learning her name as the encounter had a profound effect on her. After dropping Mona off at the woods at an undisclosed location, Mona continues to move from place to place where she worked with a Tunisian vineyard worker (Yahiaoui Assouna) in pruning vines. Yet, a group of Moroccans refused to work with her as she was on the move again where she briefly lived with Yolande and her boyfriend Paulo (Joel Fosse). The encounter would have an effect with Yolande as Mona would drift more and more to places and troubles that would lead to her outcome.

The film plays as a mixture of narrative styles. Yet, it's all told from the perspective of people who would encounter this young woman who goes from place to place. While there's not much plot in the film. It's told in a style that is unique though lags a bit early on. Agnes Varda's storytelling approach through her script and unconventional direction does make this film a worthwhile experience. It moves back and forth where she lets the audience see what Mona is going through and then get a recollection from the people she encounters as they talk to an unseen interviewer.

The script follows the character of Mona in her encounters where the important ones involve a family of goat herders, a professor, a Tunisian vineyard worker, and a maid as she would have an impact on her life. At the same time, Varda's script follows Mona's struggle to survive as the boots she would wear would start to decay while her leather jacket has a hard time getting the zipper up. It's Varda's detail to attention in Mona's struggle that makes the film captivating while her direction is rooted in cinema verite with hand-held cameras capturing the drama. At the same time, she takes a documentary approach in getting smaller characters to talk as if they're being interviewed. It's a style that is truly fascinating while letting the audience knows what will happen but executes it with grace without being too stylish. Overall, Varda creates a film that is harrowing and harsh but also entrancing in its tone and realism.

Cinematographer Patrick Blossier brings excellent work to the photography in matching stark realism with colorful imagery of the cold, Southern French landscape with colors of grey and green. While the exteriors are filled with dark colors, some of the interiors in its rich, posh setting are brighter as Blossier's work is solid throughout. The editing by Agnes Varda and Patricia Mazuy is brilliant for its slow, methodical pacing and moving back and forth from the brief interviews of people Mona meets to her plight. Even in structuring the film's unconventional approach as the editing works overall despite a slow start. The sound work of Jean-Paul Mugel is excellent for its various locations from the small towns and farms along with the conditions of where Mona is. The music of Joanna Bruzdowicz is brilliant for its stark, orchestral arrangement with screeching strings to play to the plight of Mona's struggles.

The cast is excellent with notable small roles from Patrick Schmidt as a trucker, Pierre Imbert as a mechanic, Joel Fosse as Yolande's slacker boyfriend Paulo, Marthe Jarnias as an old lady, and Laurence Cortadellas as Elaine, the wife of Jean-Pierre. Stephane Freiss is very good as Jean-Pierre, a student of the professor who tries to find Mona due to the concerns of his professor. Yolande Moreau is excellent as Yolande, a maid who is looking out for an old lady whose encounter with Mona would have some repercussions about her own life. Yahiaoui Assouna is also excellent as a Tunisian vineyard worker that Mona befriends while Macha Meril is great as a professor trying to save plane trees as her life changes through her meeting with Mona.

The film's best performance easily goes to Sandrine Bonnaire as the vagabond Mona. Bonnaire's performance is truly entrancing as she allows her character to deal with all of these people she encounters while trying to survive. Yet, she makes Mona unlikeable at times while gaining sympathy for her plight while wearing dirty clothes and doing what she can to survive. Bonnaire, at the time, was 18 when the film came out as it served as an international breakthrough for her as she would win several awards for her performance.

Released in the fall of 1985, the film won the Golden Lion at the Venice Film Festival while going on to win a Cesar award for Best Actress for Bonnaire. The film also received prestigious awards from the L.A. Film Critics Association for Best Foreign Film and Actress for Bonnaire. The film would help solidify Agnes Varda's reputation as one of France's premier directors.

Sans toit ni loi is a remarkable film from Agnes Varda featuring a brilliant performance from Sandrine Bonnaire. While it is considered to be one of Varda's finest work, those new to the director might see this as a nice place to start. While it's not an easy film to watch for more mainstream audiences. It's something art house audiences will enjoy for its unconventional approach while following a character as she struggles in her final moments. In the end, Sans toit ni loi is a harrowing yet powerful film from Agnes Varda.

I haven't seen this one yet but plan to explore this and more of Varda's work soon. Also, just a small correction in the French title, it is "Sans toit ni loi".

Thanks for the correction. It's still the only Varda film that I've seen.