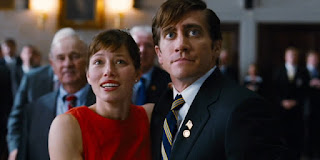 Based on the novel Sammy’s Hill by Kristen Gore, Accidental Love is the story of a waitress whose life changes after accidentally being shot in the head by a nail gun where she receives brain damage and the attention of a congressman who would exploit her. Directed by David O. Russell, under the pseudonym of Stephen Greene, and screenplay by Russell (under the Greene pseudonym), Gore, Dave Jeser, and Matt Silverstein, the film that was originally supposed to be called Nailed is a look into a woman looking for support due to her lack of health insurance as she turns to the government for help. Starring Jessica Biel, Jake Gyllenhaal, James Marsden, Catherine Keener, Tracy Morgan, Beverly D’Angelo, and James Brolin. Accidental Love is a messy and nonsensical film from Stephen Greene.

The film is a simple story of a waitress who goes to Washington D.C. to get a bill created so that she and several other ordinary people can get health insurance following an incident where she was shot in the head by a nail gun. It’s a film that has an intriguing premise where this young waitress tries to fight for herself and friends in getting the health insurance they need since they can’t afford to get surgery to fix themselves. Yet, something definitely went wrong as it relates the story where it wants to be this political crusade film where an ordinary woman wants to fight for something yet it is also this weird romantic comedy between this woman and a young congressman who would exploit her for his own means. The script not only creates moments that are ridiculous but also has no clear identity in what it wants to be or how to balance the genre. The script that was originally written by David O. Russell and Kristen Gore seemed to have ideas of a political and social satire but that seemed lost due to those who were involved in the re-writes as it would try to be all things for all people.

Yet, it’s not the script that is entirely at fault but also the direction where it looked like there was a good film somewhere from Russell. Unfortunately, it seems like he was trying to go for something that was bit more unconventional in his approach to humor only to delve too much into conventional humor. While Russell would create a lot of straightforward compositions and moments that seem to aim for elements of political satire. It is clear that the film was lost in the post-production where it became something very different from what Russell wanted as it’s probably among the many reasons why he chose to not take credit for it. Anyone not familiar with Russell’s work would probably be confused in what the film wants to be as there’s a lot of people over-acting or moments that feels like it belongs in another film. For those who are familiar with Russell’s work as a filmmaker would definitely see that there was a lot in the film that had the potential to be funny as well as provide some insight into how politics work.

Yet, there were a lot that had happened during the film’s production that said a lot about why Russell left the film and later disown it. The film’s production began in 2008 where it got shut down frequently due in part to the 2008 financial collapse where several cast and crew members walked out of the film at times where re-shoots occurred in 2010 without Russell’s involvement who did leave the film. Through the post-production with the aid of cinematographer Max Malkin, editors Mark Bourgeois and Robert K. Lambert, and sound mixer Jeffree Bloomer, the film is given a look and tone that is best described as bland. Malkin’s photography looks under-lit in some spots and has elements of grain in some spots while the editing feels very jarring and nonsensical at times. Even the sound doesn’t do much in the way the film is presented as says a lot into what was happening in the post production. Overall, the film is just a really bad movie handled by people behind the scenes who really just created something that is just bland and lacks any real heart to a story that could’ve been so much more.

Production designer Judy Becker, with set decorator Vera Mills and art director Dennis Bradford, does fantastic work with the look of the diner that the protagonist Alice worked with as well as the restaurant where she would get shot in the head with a nail. Costume designer Marie-Sylvie Deveau does nice work with the costumes as it‘s mostly casual with a bit of style in the clothes that Alice wears. Visual effects supervisor Travis Baumann does OK work with the visual effects as it is essentially set-dressing but it never does anything for the film visually. The film’s music John Swihart is just hokey at best where it tries to playful with its mixture of orchestral music and pop but never stands out at all while music supervisor Susan Jacobs doesn’t create a soundtrack that is memorable as it consists of pop and soul music.

The film’s cast features a large collective of great talent but unfortunately, no one is given much to do. Notable small roles from Beverly d’Angelo and Steve Boles as Alice’s parents, Kirstie Alley as Alice’s veterinarian aunt Rita, Bill Hader as a surgeon, Jenny Gulley as Alice’s friend/fellow waitress Brenda, Malinda Williams as a security guard named Rakeesha that Alice’s friend Keyshawn falls for, David Ramsay as representative Harshtone who helps out congresswoman Hendrickson, Kurt Fuller as the Reverend Norm who helps Alice out by going to Washington D.C. with her as he has an untreatable injury, and Paul Reubens as Hendrickson’s aide Edwin never really get anything to do as it’s clear that either whatever material they’re working didn’t do them any favors. In a very brief performance, James Brolin is awful as House Speaker Buck McCoy who is just there as a plot-point in the film where he chokes on a fucking cookie during a meeting with Alice and her friends with Hendrickson in the same room along with girl scouts.

Tracy Morgan is alright as Keyshawn where he tries very hard to be funny but it never clicks while he also show a few moments that he can do more but the script’s shortcomings never gives him to rise above. James Marsden is just bland as Alice’s boyfriend Scott as a state trooper who would propose to her but has trouble adjusting to her mood swings where he breaks it off only to return to help her in the most convoluted way. Catherine Keener is terrible as congresswoman Pam Hendrickson as this former astronaut-turned-politician that is so eager to have a moon base created on the moon while wanting to be House Speaker as she just looks ridiculous as well as that bad haircut. Jake Gyllenhaal is just horrible as congressman Howard Birdwell as this young representative that wants to do good and help Alice only to exploit her for his own means where it’s a performance that tries to be funny but feels forced and unnatural. Finally, there’s Jessica Biel in a decent but underwhelming performance as Alice Eckle where Biel does try to make her character engaging but the shortcomings in the script as well as all of these quirks in her behavior from unexpected moments of rage to speaking in Portuguese makes the character more of a caricature than a real person to root for.

Accidental Love is just a horrendous film that doesn’t just waste a lot of talent but also showcase what happens when a film with some potential just goes to shit. Fans of David O. Russell no doubt will see this as just something they wish never existed while audiences who want to see a romantic comedy will pretty much be confused by a lot of what is happening. In the end, Accidental Love is a film that just really fucking sucks.

Ouch. Sounds like this one was a dud. I had no idea they made a movie of "Sammy's Hill". My wife actually read the book a couple times and called it a breezy good time. Sounds like the movie failed at even capturing that simple feeling for this movie. But all those production problems were probably to blame. Too bad.

Yeah, all of those that happened during the production made it a bad experience as I don't blame David O. Russell, Jake Gyllenhaal, Jessica Biel, and everyone else not wanting to talk about it. I'm sure the book was much better and maybe Russell wanted to do something with Kristen Gore co-writing the script and have her involved but this is what happens when a production can go wrong and the director isn't at fault.

Yikes, I don't think I've even heard of this film. Now I know why. lol

It is SO bad. I also think you've set off wrong if you hired Jessica Biel.

@Brittani-Unless you like David O. Russell, you might see this just out of interest in what he was trying to do and how it all fell apart. Other than that, just flat out avoid it.

@Brittani-I don't think Jessica Biel is a bad actress. She has her moments whenever she is working with someone who can play to her strengths. This is not one of those films and I haven't heard her say anything about the film. Maybe the experience in making it was so bad, she refuses to talk about it. Who can blame her?

I didn't know David O. Russell was using a pseudonym for this. I was intrigued because of Jake Gyllenhaal casting but meh, I think I'll skip it. I haven't been impressed by much of what Biel's done, so not surprised this was bad.

@ruth-Well, he didn't exactly use the Stephen Greene pseudonym because he didn't want credit for it. After all, he had no involvement in the film's production which is definitely why it is so bad. Don't bother watching it. It's a fucking waste of time.