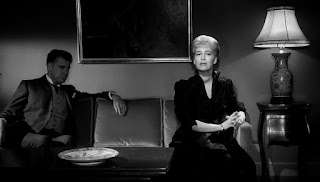 Based on the play by Hjalmar Soderberg, Gertrud is the story of an opera singer who goes on a journey to find love and fulfillment through a series of lovers following a breakdown in her marriage. Written for the screen and directed by Carl Theodor Dreyer, the film is a study of a woman trying to find herself in a very personal journey through the men who play major roles in her life. Starring Nina Pens Rode, Bendt Rothe, Ebbe Rode, Baard Owe, and Axel Strobye. Gertrud is a haunting yet mesmerizing film from Carl Theodor Dreyer.

Set in late 19th Century Denmark, the film follows the life of an opera singer who decides to leave her husband for her lover but complications begin to ensue. Especially as it leaves the titular character (Nina Pens Rode) into a personal journey where she would encounter former lovers as it play into a sense of torment and uncertainty about where she’s going. Carl Theodor Dreyer’s script is largely driven by dialogue as there’s not many scenes that occur as it’s more about what Gertrud wants but also what she had in her life. Through the meetings she would have with her husband Gustav (Bendt Rothe), her current lover in pianist Erland Jansson (Baard Owe), a former lover in poet Gabriel Lidman (Ebbe Rode), and a longtime friend in Axel (Axel Strobye). Gertrud copes with the decisions she is making but also ponders the life she leads now and her hopes for a change.

Dreyer’s direction is very entrancing for not just its minimalist approach to the filmmaking but also wanting to not rely too much on style. Featuring less than 90 shots, Dreyer’s emphasis on wide and medium shots rather than close-ups add a lot to what he wanted to tell visually but also in having the drama be told very slowly. Especially where Dreyer would have the actors recite long monologues and dialogue with one another for several minutes that includes one notably scene that lasts nearly 10 minutes in a single take. The camera would move for a few tracking shots and pans but it is mostly about the conversations that are taking place between Gertrud and whoever she is meeting with. Even as the film becomes much crueler in what Gertrud would encounter as Dreyer showcases a world that she has trapped herself in and what she needs to do to escape. Overall, Dreyer creates a compelling yet evocative film about a woman’s personal journey to find herself.

Cinematographers Henning Bendtsen and Arne Abrahamsen do brilliant work with the film‘s black-and-white cinematography to play into some of the gorgeous scenery in the few exterior scenes along with intricate lighting for the interiors as well as some heightened lights for the flashback scenes. Editor Edith Schlussel does nice work with the editing as it is very straightforward with a few fade-outs as transitional cuts along with a few rhythmic cuts for dramatic purposes. Production designer Kai Rasch does excellent work with the look of the home that Gertrud shared with her husband as well as the dining hall sequence where she, Gustav, and several friends celebrate Lidman‘s work. The sound work of Knud Kristensen is superb for its minimalist and sparse approach as it is more about natural elements in the dialogue and objects rather than create a mood for a scene. The film’s music by Jorgen Jersild is wonderful for its string orchestral-based score to play into the drama and some of the melancholic moments in the film while the songs/poems by Grethe Risbjerg Thomsen provide some of the material that Gertrud sings as an opera singer.

The film’s amazing cast features notable small roles from Vera Gerbhur as Gustav/Gertrud’s housekeeper, Lars Knutzon as a student paying tribute to Lidman, and Anna Malberb as Gustav’s mother who appears early in the film unaware of what is happening with her son’s marriage to Gertrud. Axel Strobye is fantastic as longtime family friend Axel who attends Lidman’s tribute dinner as he is concerned for Gertrud’s health at the dinner. Baard Owe is superb as Gertrud’s current over Erland Jansson as this concert pianist who is eager to have a life with her only for things about him are unveiled that would change things.

Ebbe Rode is excellent as the poet Gabriel Lidman who still carries a torch for Gertrud as he wonders why she left him as well as offering a chance to return to him. Bendt Rothe is brilliant as Gertrud’s husband Gustav as a politician that is given the chance for a big position as he still needs Gertrud’s support as he is aware why she’s leaving him but also wants her to stay with him. Finally, there’s Nina Pens Rode in an incredible performance as the titular character as this opera singer seeking a new life away from her husband as she then copes with the realities of her surroundings and the consequences of the decisions she’s made as it’s a performance filled with anguish and torment as well as being told with such restraint as it’s just astonishing to watch.

Gertrud is a phenomenal film from Carl Theodor Dreyer that features a sensational performance from Nina Pens Rode. It’s a film that isn’t just this rapturous study of a woman trying to find herself but also a film that explores a woman’s anguish over the men she’s been with for much of her life. Especially as it’s told in this very intoxicating visual style by Dreyer that is the antithesis for much of today’s conventional approach to cinema. In the end, Gertrud is a remarkable film from Carl Theodor Dreyer.

I'm not familiar w/ the filmmaker nor the cast but the premise sounds good to me. There's something instantly intriguing about an opera singer as the protagonist.

Carl Theodor Dreyer is considered the premier filmmaker of Denmark, before Lars von Trier, as he was quite innovative for what he did in the later films he did. This is a film that requires patient as it has a lot of long takes as it was something audiences at the time weren't ready for and today's audience wouldn't go for either.