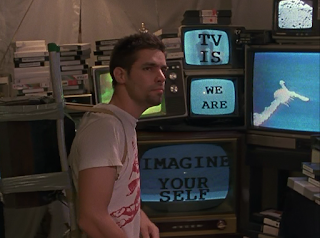 Written, directed, and co-starring Richard Linklater, Slacker is the story of a group of people wandering around Austin, Texas as they try to figure out what to do in the span of an entire day. A plot-less film that follows many characters, the film is an experimental one of sorts with several non-actors and amateurs trying to understand the world and what they want to be. Also starring Kim Krizan, Stella Weir, Louis Mackey, and Teresa Taylor. Slacker is a strange yet entrancing film from Richard Linklater.

Told in the span of 24 hours in Austin, Texas, the film is about the lives of many people who wander around the city as they discuss a lot of things as well as meet up with each other whether they’re connected or not. The film’s script is very loose where it just follows around random people whether it’s an aging anarchist, a conspiracy buff, a woman trying to sell pap smear claiming it’s from Madonna, or other regular people who deal with whatever it’s around them. Especially as they talk about all sorts of things from existentialism, not wanting to conform, and other things. Some of it is funny while some of it is very engaging such as the anarchist, a TV collector, women talking about love, and people who are just regular people that are just trying to live.

Richard Linklater’s direction is definitely intoxicating in the way he just presents the simplicity of life of random people in Austin, Texas. Shot on location in Austin and on 16mm film blown-up into 35mm, the film is presented in a somewhat documentary fashion with its usage of hand-held cameras but also with some steadicams and crane shots. Linklater’s direction would utilize some close-ups but mostly medium shots with a few wide to play into the people he randomly captures throughout the film. Especially in how he would introduce one character to another where they would be in one scene and then walk into another as they meet some other person who is then either the next subject or a set up for someone that is around that person.

Some of it would be presented in long takes as it says a lot to say what is happening or what are these people talking about. It’s an approach from one transition to another where it can meander or be episodic but because it goes into a different person and a different location makes it more intriguing. Even as the people that are being profiled are all interesting as it showcases a world that is very interesting now matter how down or uncertain some of the people in Austin are. Overall, Linklater creates a rapturous film about a day in the life of random people in Austin.

Cinematographer Lee Daniel does excellent work with the film‘s cinematography as it is colorful but also feels real in capturing the sunny aspects of the day as well as maintaining something natural for scenes set at night. Editor Scott Rhodes does amazing work with the editing as it is straightforward with a lot of emphasis on the long takes with a few stylish cuts that play into the transitions. The sound work of Denise Montgomery is superb for playing up the natural elements in the sound as well as not embellish too much in the mix as well as capture a lot of the music that is played on the background.

The casting by Anne Walker-McBay is fantastic as it features an array of appearances and performances from director Richard Linklater as a man who just arrived to Austin in the film’s beginning, Kim Krizan as a woman at a restaurant questioning about happiness, then-Butthole Surfers drummer Teresa Taylor as a woman selling Madonna’s pap smear, Louis Mackey as an aging anarchist, Stella Weir as a woman from Dallas, and many others as they all stand out. Many of which don’t provide anything that feels false as it adds to something that is very real.

I'm not very well versed on Linklater's filmography other than the 'Before' trilogy, but 'Slacker' sounds interesting. I like the idea of a movie being set in a specific city and shot on location.

I hadn't seen it for a very long time as my viewing earlier today was an overdue re-watch as I enjoyed it though the presentation of it takes a while to get used to but it's so rewarding.

@assholeswatchingmovies.com-Sometimes, films with no plot are often the best.

STILL want to see this. I've put it off sooo many times.

@keith71_98-Well, if you have money to spend for next month's Criterion sale at Barnes & Noble. Get the DVD/Blu-Ray.

This is one of those films that just shows how you can make a great film with a limited budget. This and Clerks are so similar in terms of how they launchced Linklater and Smith's careers, explored both the director's towns and how they were shot on such a low budget.
Definitely one of those films who want to relax and chill out to.

@Khalid-Exactly. It was made for $23,000 and it proved that you don't need a million dollars to make a film back then. You just need some imagination and something simple and you can make something magical.