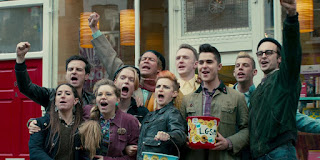 Directed by Matthew Warchus and written by Stephen Beresford, Pride is the story about the British miner’s strike of 1984-1985 where miners reluctantly get the support of gay and lesbian activists who would raise money for the miners. The film is a dramatic account on how the gay and lesbian community get involved as well as display the act of solidarity during one of Britain’s most tumultuous periods. Starring Bill Nighy, Imelda Staunton, Paddy Considine, Dominic West, Andrew Scott, George MacKay, Joseph Gilgun, Menna Trussler, and Ben Schnetzer. Pride is a heartfelt and compelling film from Matthew Warchus.

The British miners’ strike of 1984-1985 was an event in Britain that had miners going against the rule of its then-prime minister Margaret Thatcher over pit closures and pay restraints. It was around this time that the National Union of Mineworkers would receive support but from the most unlikely group of people in the gay and lesbian community who saw the same amount of prejudice and abuse they had received from the police as they offered their own support as an act of solidarity. The film is a dramatic account of this event which is considered a watershed moment for the British gay and lesbian movement but also for the miners strike as well where it took a ragtag group of people who go to a small town in Wales to offer their support and raise money for the miners.

Stephen Beresford’s screenplay talks about the formation of the Lesbians and Gays Support the Miners campaign that started in a gay bookshop by a few activists where they just wanted to donate whatever money to help miners who are on strike and can’t pay the bills. While NUM was at first unwilling to take their money, it was through a small faction in this small Welsh mining town that said yes but unaware of who they’re getting money from as the locals are aghast of who is giving them donations. Still, one of the miners’ local organizers in Dai Donovan (Paddy Considine) would invite them as does the leader of the women’s support group in Hefina Headon (Imelda Staunton) where it took a while for the locals to accept them. Even as the LGSM would find ways to raise more money and awareness despite the fact that there is a lot happening in their own community as it relates to the AIDS crisis as one of them is HIV positive yet has found a way to curb his disease.

Matthew Warchus’ direction doesn’t really go for a lot of style except for a few scenes shot entirely on hand-held to give it a cinema verite feel. Yet, it does maintain a simplicity in not just the compositions but also the setting as it is shot not just in parts of London and its nearby suburbs but also in small towns in Wales to make it feel very real. Warchus would also find something ordinary and make it special as the film does have subplots as it relates to not just miners’ wives trying to do what they can for their husband but also find themselves in their own right. The direction also play into the realities of what is going on in Britain with footage of the news as well as what the tabloids were printing as a way to cause problems between the two factions. Even as a miner’s widow would create further problems upsetting her brother-in-law who is one of the organizers in the strike. Though it’s third act does give the film a bit of a different tone as it relates to not a lot of realities in both the mining and gay community. It does serve as some major moments in a few of its characters as well the fact that these two very different communities come together where they were able to make a difference in a way that is bigger than themselves. Overall, Warchus crafts a lively and engaging film about gay and lesbian activists helping striking miners in their time of need during the 1980s British miners’ strike.

Cinematographer Tat Radcliffe does excellent work with the film‘s cinematography from the vibrant look of London in its clubs and the gay bookshop that the LGSM organizers frequent at to the more drenched yet grey-like color of the small town in Wales. Editor Melanie Oliver does fantastic work with the editing as it does play into style with its usage of jump-cuts as well as some montage-based cutting. Production designer Simon Bowles, with set decorator Liz Griffiths and supervising art director Mark Raggett, does amazing work with the look of the bookshop the LGSM organizers meet as well as some of the clubs they go to and the community hall at the small Welsh town where the miners meet to have meetings. Costume designer Charlotte Walter does brilliant work with the costumes from the colorful look of the members of the LGSM to the more grey and casual look of the miners and their wives.

Hair/makeup designer Nadia Stacey does terrific work with the look of the hairstyles and makeup of some of the members of the LGSM as well as create a straight-laced look for the miners and their families. Visual effects supervisor Hugh MacDonald does nice work with some of the film‘s minimal visual effects which is just essentially set dressing to play into what London looked like in the 1980s. Sound designer Blair Jollands does superb work with the sound in the way some of the parties sound as well as the sparse yet eerie tension heard in a key meeting late in the film. The film’s music by Christopher Nightingale is wonderful for its mixture of low-key orchestral music and guitar-based rock music to play into the period of the times while music supervisor Nick Angel creates a fun soundtrack filled with a lot of the music of the times from the Smiths, Shirley & Company, Bronski Beat, Frankie Goes to Hollywood, Culture Club, Dead or Alive, and Pete Shelley as well as some folk-based pieces from Pete Seeger and Billy Bragg.

The casting by Fiona Weir is phenomenal as it include some notable small roles from Matthew Flynn and Monica Dolan as Joe’s parents, Olwen Medi as Gethin’s mother, Kyle Rees and Jack Baggs as a couple of young miners who go to Jonathan in getting dance lessons so they can get girls, Rhodri Meilir as the miner/co-organizer Martin James, Liz White and Nia Gwynne as a couple of miners’ wives, and the trio of Freddie Fox, Chris Overton, and Joshua Hill as members of the LGSM. Other noteworthy small roles include Karina Fernandez and Jessie Cave as two LGSM members who want to form a splinter group known as Lesbians Against Pit Closures while Lisa Palfrey is terrific as the widow Maureen Barry who isn’t keen on having LGSM at the town as she tries to create trouble only to get the ire of her brother-in-law Cliff. Menna Trussler is wonderful as the elderly widow Gwen who would be the first to take LGSM’s donation as well as find common ground with the lesbians. Andrew Scott is fantastic as LGSM co-founder Gethin who also runs the bookshop with his partner Jonathan as he admits to his reluctance in returning to Wales due to his relationship with his mother where he would eventually find the courage to see her again.

Jessica Gunning is excellent as Martin’s wife Sian who would find her voice in the activism as she would also the person to help the LGSM and miner’s union find common ground. Dominic West is brilliant as the HIV-stricken Jonathan who isn’t sure about what his friends are doing as he helps them while showing the young miners how to dance as a way to pick up women. Joe Gilgun is superb as LGSM co-founder Mike Jackson who would introduce the young Joe to activism as well as be the one to create banners for the cause. Faye Marsay is amazing as Stephanie Chambers who is the lone lesbian of the group who has a wild look but finds herself having more common ground with the miners’ wives where she takes a maternal role for Joe. George MacKay is great as Joe as a college student who finds himself taking on the cause to help the miners while trying to hide his sexuality from his parents where he finally makes a big decision as an adult.

Ben Schnetzer is incredible as the late LGSM co-founder Mark Ashton who is the group’s leader that rallies everyone around to the cause as he sees similarities in the struggles the miners are facing along with the gay and lesbian community as it’s just this riveting breakthrough. Paddy Considine is marvelous as local miners’ leader Dai Donovan who would be the first to meet the LGSM as he is taken aback by them at first only to see that they’re just cool people. Imelda Staunton is radiant as Hefina Headon as the head activist for the miners’ wives who is one of the first to welcome in the LGSM as she sees what they’ve done for the cause as well as realize how fun they are. Finally, there’s Bill Nighy in a remarkable performance as Cliff Barry as a miner who had seen a lot as he is one of the few who welcome the LGSM immediately as well as know what is at stake as it relates to the well-being of the miners and their families.

Pride is a sensational film from Matthew Warchus. Featuring a great ensemble cast, awesome music, and a compelling story that is based on the real British miners’ strike of the mid-1980s. It’s a film that doesn’t just explore a moment in time but also a moment where people came together just to help one another no matter what sexual preference they are. In the end, Pride is a phenomenal film from Matthew Warchus.

I can't believe I still haven't seen this movie. I've been eager to watch it since I first heard about it. You've piqued my interest even further. :-)

It's been on Showtime and its other channels for a few months now as if you have those channels. See it as it is an important film of sorts as it relates LGBT but also in what they were able to do for miners during that horrible period of Margaret Thatcher.

The subject matter seems to remind me of 'Suffragette', a British film w/ an excellent cast that I still need to see.

I'm not sure when Suffragette is going to be on TV or if it will be on one of the channels that I have but Pride is a film worth seeing not just for the cast but for the story itself.

I watched this one quite a while ago but still remember it fondly. It could easily have become schmaltzy but never did. Quite stirring actually.

@assholeswatchingmovies.com-Films like this could've gone into the schmaltz territory which I often dislike but thank goodness the film didn't as I was compelled by what was happening as well as realize how much they done as it was a big deal back then.