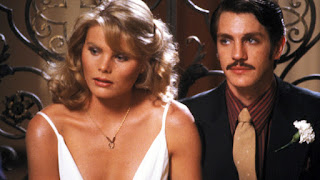 Based on the Pulitzer Prize-winning Village Voice article Death of a Playmate by Teresa Carpenter, Star 80 is about the life and death of Playboy Playmate Dorothy Stratten who was set for stardom until she gains the jealousy of her husband/ manager Paul Snider. Written for the screen and directed by Bob Fosse, the film is a dramatic account into Stratten’s life as well as her tumultuous relationship with Snider as Dorothy Stratten is played by Mariel Hemingway and Eric Roberts in the role of Paul Snider. Also starring Cliff Robertson, Carroll Baker, Roger Rees, and David Clennon. Star 80 is a eerie yet entrancing film from Bob Fosse.

Dorothy Ruth Hoogstraten aka Dorothy Stratten was a young woman who had become the 1980 Playmate of the Year for Playboy magazine as she was due for stardom where she would appear in Peter Bogdanovich’s 1981 film They All Laughed. Instead, her life was cut short tragically at the age of 20 where she was killed by her husband/manager Paul Snider in a fit of rage and jealousy who would later kill himself. The film is about Stratten’s short life from how she was discovered by Snider and to the murder/suicide as it’s told in a unique narrative as it has Snider looking back while the narrative would cut back-and-forth in events during their life as well as various people including Stratten’s mother (Carroll Baker) and Playboy magazine founder Hugh Hefner (Cliff Robertson) being interviewed about Stratten and the events that led to her death. Bob Fosse’s script does take some dramatic liberties due to some legal issues as it relates to the real-life story where he wouldn’t be able to use the real names of Stratten’s family as well as Stratten and Snider’s neighbors at the home they shared in Los Angeles.

Another figure in Stratten’s life that is given liberties is the filmmaker Peter Bogdanovich where he isn’t mentioned in the film due to legal reasons. Instead, Fosse would create a fictionalized version of the character in Aram Nicholas (Roger Rees) who would be the filmmaker that falls for Stratten and offer a life without Snider’s control. The narrative does however create some unique development where Stratten would mature and be surrounded with people who really care about her as well as be aware of her husband’s behavior and plans. Snider’s development is just as interesting as this sleazy yet well-meaning guy who discovers Stratten at a Dairy Queen where he falls for her. Once she goes to Los Angeles and makes some connections, Snider becomes suspicious yet still has ambition. Unfortunately, his ideas for her and what he wants prove to be tasteless and low-class as he loses money and goes insane.

Fosse’s direction is definitely stylish not just in its usage of montages to play into Stratten’s rise as well as the numerous photos she took. It is also in the way he created different array of film styles ranging from the documentary to something more dramatic. Notably as he would maintain different visual styles in the way some of the scenes are presented where the interviews are very straightforward with a few stylish but eerie shots. The dramatic portions including a scenes where Stratten are interviewed do have a flair of style as it play into her rise to stardom. Fosse’s usage of close-ups and medium shots play into the intimacy in not just Stratten’s own observation of the world but also in the evolution of her relationship with Snider where it would eventually become toxic. Fosse would also use close-ups for a lot of the scenes set in Los Angeles with a few shots set in Vancouver as it play into the two different worlds these characters would encounter.

While Fosse would create something that is a play on the idea of fantasy vs. reality as it relates to Snider wants in the former, Fosse would an extra layer of realism for the film’s climax where the home that Stratten and Snider lived is the place where they actually lived in the final days of their lives. All of which plays into the tragedy as well as one man’s determination to keep this beautiful young woman no matter at what cost. Overall, Fosse creates an unsettling yet compelling film about the life and death of Dorothy Stratten.

Cinematographer Sven Nykvist does brilliant work with the film‘s cinematography from the colorful look of the sunny day locations in California as well as some of the lavish approach to lighting for some of the interiors including Stratten‘s photo shoots. Editor Alan Heim does excellent work with the editing as it is very stylish with usage of dissolves, jump-cuts and montages to play into the craziness of the Hollywood life that Stratten would encounter as well as some of the eerie moments involving Snider. Art directors Michael S. Bolton and Jack G. Taylor Jr., with set decorators Anne D. McCulley and Kimberly Richardson, do fantastic work with the look of the Playboy mansion‘s interiors as well as the apartment that Snider has in Vancouver.

Costume designer Albert Wolsky does amazing work with the costumes as it plays into the look of the late 70s where it is all about style as Stratten‘s look represents this air of innocence while Snider‘s choice of clothing fits perfectly with who he is. Sound editor Dan Sable does nice work with the sound to play into the atmosphere of the parties as well as some of the chilling moments at the film‘s climax. The film’s music by Ralph Burns is superb for its mixture of low-key orchestral music with some electronic music to play into the times while the soundtrack that featured music by the Village People, Billy Joel, Rod Stewart, Steppenwolf, Louie Prima, Shirley Goodman and Leonard Lee, and the Band.

The casting by Howard Feuer and Jeremy Ritzer is wonderful as it includes some notable small roles from Keenan Ivory Wayans as a comic, James Luisi as Hefner’s assistant, Stuart Damon as a TV actor that Snider talks to, Tina Willson as a Playboy Playmate, Keith Hefner as a photographer cheated out of a finder’s fee by Snider, Lisa Gordon as Dorothy’s sister Eileen (a fictionalized version of Louise Stratten), Kathryn Witt as Stratten/Snider’s neighbor Robin, Josh Mostel as a private detective Snider hires late in the film, and David Clennon as a neighbor of Stratten/Snider who befriends them only to be wary of Snider’s troubled behavior. As a fictionalized version of filmmaker Peter Bogdanovich in the form of Aram Nicholas, Roger Rees is excellent as this filmmaker who falls for Stratten as well as being nurturing to her growing talents as an actress and being the man who wants to help her. Cliff Robertson is brilliant as Hugh Hefner as the man who founded Playboy as he sees something more in Stratten where he would be a fraternal figure of sorts for her while being very suspicious towards Snider.

Carroll Baker is amazing as Stratten’s mother who is suspicious about what Snider wants to do as she isn’t really charmed by him while she is also aghast in how he stole Stratten from her. Mariel Hemingway is remarkable as Dorothy Stratten as this young and beautiful woman who finds herself becoming a star where Hemingway displays an air of innocence to the character as well as someone who would grow up knowing that something isn’t right about Snider. Finally, there’s Eric Roberts in an incredible performance as Paul Snider as he exudes the sleaziness of the character in the way he looks and acts but also has a charm that is engaging where it would morph into something very dark in its anguish and torment where Roberts really creates something that is very scary to watch.

Star 80 is a marvelous film from Bob Fosse that features great performances fro Eric Roberts and Mariel Hemingway. It’s a film that doesn’t just explore not just some of the darker aspects of obsession but also tragedy in the form of a real life story of the murder suicide of Dorothy Stratten and Paul Snider. In the end, Star 80 is a brilliant film from Bob Fosse.

I saw this movie many years ago, when it was in theaters, and don't remember it well. Based on your review, it's probably worth revisiting.

This movie is devastating, especially knowing that it's a true story. Eric Roberts is downright scary and maniacal. It's easily the best performance of his career, in my opinion. Same for Mariel Hemingway. What a brilliantly dark, dark film.

@Stephanie Marshall Ward-It was a re-watch for me as it had been a long time since I've seen it. While I think it's the weakest film Bob Fosse has done, it is still an intriguing picture.

@Wendell-Eric Roberts is someone that is due for a comeback as the guy is really underrated. Mariel Hemingway is also due for a comeback herself as she is great in this. It is a dark film as I have seen a doc on the real-life story. Oh, Snider was nuts and Roberts definitely captured the dark aspects of that man.

Wow, I almost didn't recognize Eric Roberts in that photo! That's Mariel Hemingway? I remember her from Lipstick from years ago. I think she acted w/ her sister Margaux.

@ruth-Yep, that is Mariel Hemingway and she had a boob job for that film in order to look more like a Playboy Playmate.