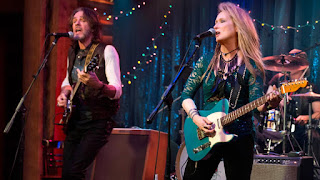 Directed by Jonathan Demme and written by Diablo Cody, Ricki and the Flash is the story of a middle-aged rock singer who learns about her daughter’s divorce as she goes to see and help her while dealing with the family she left to pursue her dream as a rock star. The film is a simple family drama where a woman returns to her family to help her daughter as well as cope with the decision she made in abandoning them to pursue her dream. Starring Meryl Streep, Kevin Kline, Mamie Gummer, Audra McDonald, Sebastian Stan, Ben Platt, Nick Westrate, and Rick Springfield. Ricki and the Flash is an exhilarating and heartfelt film from Jonathan Demme.

The film follows a woman who abandoned her family to pursue her dreams to be a rock star as she finally returns home after hearing about her daughter getting a divorce. It’s a film where a woman not only deals with not just the decisions she made to pursue her dreams but also make an attempt to set things right again for herself and her family. Especially as she still wants to play music in California as she fronts a band called the Flash. Diablo Cody’s screenplay doesn’t just explore the world that Linda “Ricki” Rendazzo (Meryl Streep) lives where she plays at a bar with her band that includes her guitarist Greg (Rick Springfield) who has feelings for her. It’s also in the fact that Ricki is struggling to get by as she’s working at an organic supermarket and paying off her debts. The first half of the film is about Ricki returning to Indianapolis to see her ex-husband Pete (Kevin Kline) and their daughter Julie (Mamie Gummer) as the latter has fallen apart because her husband left her for another woman.

Cody’s script also play into Ricki’s struggle with her family as well as the fact that the void she left was filled by Pete’s second wife Maureen (Audra McDonald) who did a lot for Julie as well Julie’s older brothers Joshua (Sebastian Stan) and Adam (Nick Westrate). The latter of which is gay while the former is about to get married to Ricki’s own surprise as she is also quite conservative in her views despite the music she plays. It adds a lot to the complexity of Ricki but also her own flaws as she is quite selfish as well as ignorant though she means well. Especially when she is confronted by Maureen despite what Ricki had done to help Julie as it would lead to this third act which revolves around Joshua’s wedding.

Jonathan Demme’s direction is quite stylish in terms of the looseness he creates for many of the scenes set in California while going for something that is more controlled and tight for the scenes set in Indianapolis as much of the film is shot in upstate New York. Yet, a lesser director would struggle with trying to create a balance in the two styles but Demme does find that balance where it never feels like two different films. Notably as the film features a lot of music from Ricki playing with her band as well as a scene where she plays a song to Pete and Julie. Demme’s usage of close-ups and medium shots for many of the scenes in Indianapolis are quite intriguing as well as playing into some of the family tension when Ricki sees her sons for the first time in years. The scenes at the bar where the Flash play is quite lively as it include some line dancing as well as moments that are quite raucous where Demme does use a few wide shots to capture the space of the bar. The film’s climax at Joshua’s wedding is a mixture of the different visual styles yet Demme does find a way for all of it to come together. Overall, Demme creates a touching yet entertaining film about middle-aged rocker coming home to help her daughter and mend old wounds with her family.

Cinematographer Declan Quinn does excellent work with the cinematography as it is very straightforward with some unique lighting for the interiors at the bar and the scenes set at night in both California and Indianapolis. Editor Wyatt Smith does nice work with the editing as it is largely straightforward with a few stylish cuts for some of the musical performances. Production designer Stuart Wurtzel, with set decorator George DeTitta Jr. and art director Patricia Woodbridge, does brilliant work with the look of the bar Ricki and the Flash play as well as the home that Pete and Maureen lives in at Indianapolis.

Costume designer Ann Roth does terrific work with the costumes from the stylish clothes of Ricki as well as the more straight-laced look of Pete and the mixture of both in Julie. Visual effects supervisor Luke DiTommaso does wonderful work with the minimal visual effects in the film as it‘s mostly a few set-dressing pieces for some of the scenes in Indianapolis. Sound mixer Jeff Pullman does superb work with the sound as it is straightforward as well as play into the energy of the concerts that Ricki and the Flash perform at. The film’s soundtrack features not just a lot of songs ranging from rock to pop music that Ricki and the Flash performs but also music from Spirit, the Feelies, and Electric Light Orchestra that is played in the background.

The casting by Tiffany Little Canfield and Bernard Telsey is great as it features cameo appearances from Adam Shulman as a customer at Ricki’s supermarket, Bill Irwin as a father at a donut shop who is annoyed by Ricki and Julie’s conversation, Charlotte Rae as Pete’s mother, Beau Sia as Adam’s partner Desmond, and Gabriel Ebert as Julie’s ex-husband Max whom Pete and Ricki confront during a night-out with Julie. In roles as members of the Flash, there’s legendary Parliament-Funkadelic keyboardist Bernie Worrell as keyboardist Billy, famed session drummer Joe Vitale as the drummer Joe, and famed session bassist Rick Rosas as the bassist Buster (whom the film is dedicated to) as they all provide a great presence to their roles as the musicians. Hailey Gates is wonderful as Joshua’s fiancee Emily who is bewildered by Ricki while Ben Platt is terrific as the bartender Daniel who worships at the altar of Ricki and the Flash. Nick Westrate and Sebastian Stan are excellent in their respective roles as Ricki’s sons Adam and Joshua with the former not really fond of his mother accusing her of being a homophobe with the latter wanting to make peace but is unsure of inviting her to the wedding.

Audra McDonald is brilliant as Pete’s wife Maureen who had become the maternal void filled for Ricki’s children as she tries to make peace with Ricki as well as give her some truths that Ricki has to face. Mamie Gummer is amazing as Julie as Ricki’s daughter who has become a wreck following a divorce as she is quite funny in the way she does things as well as be someone who is very fragile. Rick Springfield is fantastic as Greg as the Flash lead guitarist who is in love with Ricki as he gives her some advice as well as tell her how important she is as a mother. Kevin Kline is incredible as Pete as Ricki’s ex-husband who tells Ricki about Julie as he copes with Julie’s mood as well as trying to maintain the peace in the family while admitting he still cares about Ricki. Finally, there’s Meryl Streep in a sensational performance as Ricki Rendazzo as this middle-aged rocker that is trying to reach her dream while helping out her daughter get back on her feet as it’s a lively and entertaining performance from Streep.

Ricki and the Flash is a marvelous film from Jonathan Demme that features a dazzling performance from Meryl Streep. Also featuring a witty script by Diablo Cody, a fantastic ensemble cast, and a killer soundtrack, the film is a heartfelt yet entertaining film that manages to be fun as well as state the importance of family. In the end, Ricki and the Flash is a remarkable film from Jonathan Demme.

I'm curious to see this one initially but then totally forgot about it. I have no doubt Streep rocked her role as um, a rock star. Interesting to see her act with her real life daughter Mamie.

The two together are definitely fun to watch as it's clear they have chemistry as mother and daughter. Especially in the donut shop scene.

I keep putting this off in favor of other movies. Sounds like I need to break down and watch it.

@Wendell-It's not like a top-tier film but still a lot of fun to watch. Especially for Bernie's small role as Ricki's keyboard player as it was reunion with him and Jonathan Demme as the two did Stop Making Sense more than 30 years ago. Bernie will be incredibly missed.