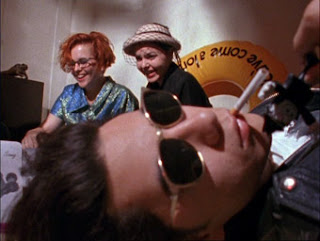 Written, directed, shot, and edited by Gregg Araki, Totally Fucked Up is the story about a group of six gay teens who deal with growing pains as well as relationships with each other. The first of a trilogy of films that explores teen angst in the 1990s that is known as the Teenage Apocalypse trilogy, the film is a continuation into Araki’s exploration into the world of gay culture but told through the eyes of teenagers. Starring James Duval, Roko Belic, Susan Beshid, Jenee Gil, Gilbert Luna, Lance May, Craig Gilmore, and Alan Boyce. Totally Fucked Up is a somber yet engaging film from Gregg Araki.

Told in 15 segments and an epilogue in a fragmented yet straightforward narrative style, the film revolves around the lives of four gay men and a lesbian couple wandering around aimlessly in Los Angeles as they’re being filmed by one of their friends who aspires to be a filmmaker. All of which has them going to clubs and other places around the city as they deal with not just the uncertainty of what will happen. Especially as they deal with loneliness and trying to be accepted for who they are as the six become a dysfunctional yet tight-knit family. Gregg Araki’s screenplay doesn’t play into conventional narrative where it focuses mostly on these six characters dealing with day-to-day situations where Steven (Gilbert Luna) is trying to document everything as he’s in a relationship with Deric (Lance May).

While Michele (Susan Beshid) and Patricia (Jenee Gil) are in more stable relationship and Tommy (Roko Belcic) trying to find himself. It is Andy (James Duval) who has an arc as he copes with being lonely as he tries to find love. While Andy would turn to friends for help despite his moody behavior, they would also have to deal with things in their life as the script shows the family sort of splintering apart. The script also plays into the world they delve into as it represents the sense of alienation and bigotry they deal with as well as that they’re still with the specter of AIDS though no one in the group has it yet and they’re trying not to.

Araki’s direction is quite stylish for its mixture of shooting everything on film and on a video camcorder to play into Steven’s own documentary about himself and his friends. With the usage of hand-held camcorders to play up the idea of a homemade documentary, Araki also has Los Angeles be a character as this world that is changing but also still alien to its characters who don’t feel comfortable in malls or anything that is mainstream. Instead, Araki shoots in very different locations in Los Angeles that makes it feel sort of relatable to how teenagers would feel in a world that is quite alienating. Araki’s usage of close-ups and medium shots along with the way he frames some of his actors into a shot does show that sense of loneliness and uncertainty.

While the fragmented approach to the narrative does make the film’s pacing a bit sluggish, Araki still manages to create moments that are engaging as it plays to the growing pains the character go through. Serving as the film’s cinematographer/editor, Araki would create a unique look that is quite colorful and playful to its look as well as in some of the way scenes are shot at night. In the editing, Araki uses a lot of jump-cuts and other stylish cuts to play into the fragmented tone but also use some stylish inter-title cards that is displayed on a television to play into the state of the world these characters are in. Even as it says some of the things they’re thinking of as it does relate to some of the tension over gay and lesbian culture/lifestyle that was happening in the early 90s. A world that was becoming slow to accept gay/lesbian lifestyle where these young kids struggle to define themselves in a growing new world. Overall, Araki crafts a stylish yet ravishing film about teens dealing with themselves and their sexuality in Los Angeles.

Sound designer Alberto Garcia does superb work with much of the film’s post-production sound to create textures and sound collages for the things the characters see or hear on TV. The film’s incredible soundtrack features an array of music ranging from industrial, shoegaze, and dream-pop from acts like This Mortal Coil, Ministry, Ride, My Life with the Thrill Kill Cult, 16 Volt, Unrest, Red House Painters, His Name is Alive, the Wolfgang Press, Recliner, Coil, the Pale Saints, the Jesus & Mary Chain, Numb, and Babyland.

The film’s phenomenal cast include a couple of notable small roles from Craig Gilmore as a guy that Steven meets and Craig Boyce as a college student that Andy falls for. Jenee Gil and Susan Beshid are fantastic in their respective roles Michele and Patricia as the lesbian couple who are definitely the most mature individuals of the group as they often can get their shit together while offering some of the guys advice. Roko Belic is terrific as Tommy as the youngest of the group who still is trying to find himself as he would get a bigger role in the third act as he is someone looking for a home.

Lance May is brilliant as Deric as Steven’s lover who knows a lot about the gay lifestyle but begins to feel detached from Steven. Gilbert Luna is excellent as Steven as an aspiring filmmaker who is trying to document everything around him while wondering if he’s a good person despite some of the bad things he does. Finally, there’s James Duval in an amazing performance as Andy as a brooding teenager who deals with ever-increasing loneliness as he tries to find love and happiness while lamenting over the world around him.

Haven't seen this, but it sounds really interesting. Of Araki's work, I've only seen Mysterious Skin, which is brilliant, and White Bird in a Blizzard, which is not. So, I'm real curious about this one.

@Wendell-It's not an easy film to find as I was able to find the film somewhere and I downloaded it a long time ago. The Living End I think is the better introduction to Araki's earlier work as the films he made in the 90s are different from the ones he made since Mysterious Skin as they were more raw and confrontational.

I have seen most of Araki's fims but this one and The Living End are hard to find. Im not a huge fan of his movies but I do enjoy The Doom Generation, and Smiley Face

@TheVern-Totally Fucked Up and The Living End are available via torrents while it's the first 2 films of his that I really want to see and then his most recent as I do enjoy his work a lot.