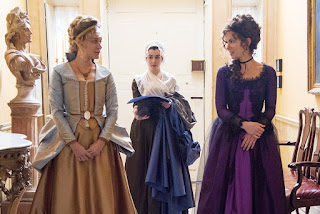 Based on the novella Lady Susan by Jane Austen, Love & Friendship is the story of a scandalized widow who seeks refuge at the home of her brother-in-law where she hopes to find a husband for herself and her daughter. Written for the screen and directed by Whit Stillman, the film is a period drama set in the late 18th Century where it plays into a woman is trying to redeem her name and provide a future for her daughter. Starring Kate Beckinsale, Xavier Samuel, Emma Greenwell, Morfydd Clark, Jemma Redgrave, Tom Bennett, Justin Edwards, Jenn Murray, Stephen Fry, and Chloe Sevigny. Love & Friendship is a witty and delightful film from Whit Stillman.

Set in 1790 Britain, the film revolves a recently-widowed woman whose scandalous past has come back to haunt her as she moves in with her brother-in-law where she falls for her sister-in-law’s brother. When her daughter has been kicked out of school, complications emerges when she falls for the same man her mother is courting while evading the affections of a dim-witted suitor. It’s a film that isn’t just about some of the complications of love but also a woman’s attempt to maintain her social status despite her illustrious past as a flirt where she’s not even allowed to talk to one of her best friends publicly as they would talk privately or correspond secretly through letters.

Whit Stillman’s screenplay isn’t just an exploration of social climbing, reputation, and survival but also a woman trying to ensure her daughter’s security despite their own personality differences. Yet, Lady Susan Vernon (Kate Beckinsale) is a woman that has become accustomed to a lifestyle and wants to keep it no matter what it takes. Sure, Lady Vernon is manipulative and is willing to scheme but it is all about the nature of the game she has to play to survive despite the notoriety she’s attained in the past as she is a bit indifferent of what people think of her. Still, she has to think about her teenage daughter Frederica (Morfydd Clark) who is asked to marry this young buffoon in Sir James Martin (Tom Bennett). Upon meeting her sister-in-law’s brother Reginald DeCourcy (Xavier Samuel), Lady Vernon sees him as a prospective husband but things complicated when Federica falls for him as well.

It’s not just in the plot scenarios and schematics where Stillman explores what Lady Vernon is doing but it is also in the dialogue. Stillman’s dialogue is very stylized in not just playing to the times but also in the rhythm and tone that is true to writings of Jane Austen. It has a language that is unique but also a feel that manages to play off into much of the humor. Even in some the dramatic moments as it play into the anguish in Frederica as well as some of the conversations Lady Vernon has with her American friend Alicia Johnson (Chloe Sevigny) who understands her friend’s plight. While she doesn’t agree with Lady Vernon’s tactics, she does understand the need to survive as she is married to a prestigious businessman in Mr. Johnson (Stephen Fry). Yet, if he finds out that his wife is talking to Lady Vernon. He will take her back to America where she is seen as a traitor for supporting the British during the American Revolution as it’s one of these tidbits in the script that makes it so fun to follow.

Stillman’s direction definitely owes a lot to style in not just the way it plays into costume period dramas but give it a sense of irreverent humor. From the way the characters are introduced to how elements of poetry and letters are being read with text presented on screen. Shot entirely on location in Ireland, the film does play into the look of the period with its usage of wide and medium shots to capture the location while the latter would also provide a sense of intimacy in the dramatic elements along with its usage of close-ups. Much of the composition relies more on a sense of control with its steadicams to follow the actors walking into a room or at a court inside the house. It all plays into this world where it is about behaviors and prestige where Stillman says a lot of what is going on in that world where everyone of importance has to present themselves in a certain way. At home, they can be themselves no matter how bad they are.

There is no question that Lady Vernon is a despicable character but she isn’t totally un-likeable as Stillman wants to maintain that sense of what she is doing. Especially as it relates to his own fascination of the upper-class world and what people are willing to do to maintain a lifestyle that not many people are accustomed to. Stillman doesn’t try to over-dramatize things with the exception of one key character who is presented as a form of humor. It is all about the role that women played in society and what they had to do to survive in an upper-class world. Even as they have to contend with morals and the rules where this one woman does what she have to do while not being afraid to break a few rules in the process. Overall, Stillman creates an engaging and exhilarating comedy about a woman’s search to find husbands for herself and her daughter through devious means.

Cinematographer Richard Van Oosterhout does excellent work with the film‘s cinematography from the differing look of the exteriors to play into a mood for the film as well as some of the interiors with its low-key approach to lighting as well as how the sun is placed against the windows. Editor Sophie Corra does terrific work with the editing as it largely straightforward to play into some of its humor through its rhythmic cuts as well as for some of the dramatic moments. Production designer Anna Rackard, with art directors Louise Mathews and Bryan Tormey and set decorator/carpenter Stuart Crinnion, does brilliant work with the look of the many interiors in the homes and estates that the characters live in as well as the apartment that Lady Vernon would live in London for the film‘s second half. Costume designer Eimer Ni Mhaoldomhnaigh does amazing work with the costumes from the lavish look of the dresses the women wear including the hats as well as the clothes that the men wore in those times.

Hair designers Eileen Buggy and Rod Ortega, with makeup designer Margot Boccia, do fantastic work with the design of the hairstyle of the women with the latter doing the work for the look of Lady Vernon. Visual effects supervisors Danielle Kempen and Hans van Helden do nice work with the minimal visual effects where it is really bits of set dressing as well as displaying the text that is read by characters onscreen. Sound editor Ranko Paukovic does superb work with the sound with way some of the action is heard in another room along with the lively moments in a party scene where Sir James is dancing like an idiot. The film’s music consists largely from traditional and classical pieces from the period of the time as well as variations of original music by Benjamin Esdraffo and Mark Suozzo with the latter doing much of the music supervision in selecting various classical and operatic pieces that are played in the film.

The casting by Kerry Barden, Colin Jones, and Paul Schnee is phenomenal for the large ensemble that it displays as it include some notable small roles from Kelly Cross as Lady Vernon’s traveling companion Mrs. Cross in the film’s first act, Conor Lambert as the DeCourcy family butler, Sylvie Benoiton and Daniel Magee as the children of Charles and Catherine Vernon, Lochlann O’Mearain as Lord Manwaring, Sophie Radermacher as Lord Manwaring’s young daughter, and Justin Edwards as Lady Vernon’s brother-in-law Charles Vernon who offers her a temporary place to stay as well as deal with several family issues. Stephen Fry is superb in his small role as Mr. Johnson as Alicia’s husband who disproves her friendship with Lady Vernon while attending to the emotional needs of Lady Manwaring in a very comical manner. Jenn Murray is wonderful as Lady Lucy Manwaring as this emotional drama queen who hates Lady Vernon as she accuses her of seeing her husband.

James Fleet and Jemma Redgrave are excellent in their respective roles as Sir Reginald and Lady DeCourcy as Catherine and Reginald’s parents who are concerned with Lady Vernon’s presence while taking in Frederica whom they cherish. Chloe Sevigny is fantastic as Alicia Johnson as an American exile who is Lady Vernon’s best friend as she helps her despite being told by her husband not to as Sevigny displays a lot of charm and flair to her character. Emma Greenwell is amazing as Catherine DeCourcy Vernon as Charles’ wife who also takes in Lady Vernon as well as taking a liking towards Frederica while admitting to having her own qualms about Lady Vernon. Morfydd Clark is brilliant as Lady Vernon’s daughter Frederica as this shy and troubled young girl who has gotten kicked out of school as well as not wanting to get married where Clark displays an anguish as well as an innocence to this young woman who finds herself falling in love.

Tom Bennett is hilarious as Sir James Martin as a young man who wants to marry Frederica as he is just this loveable buffoon who says very idiotic things while believing there’s twelve commandments instead of ten as he is just fun to watch. Xavier Samuel is remarkable as Reginald DeCourcy as this young man who becomes attracted to Lady Vernon as he finds her interesting while also becoming drawn by Frederica. Finally, there’s Kate Beckinsale in an incredible performance as Lady Susan Vernon as she exudes charm and wit into her character while not being afraid of being despicable but in a loveable way as Beckinsale just gives the performance of her career.

Love & Friendship is a sensational film from Whit Stillman that features a delightful performance from Kate Beckinsale. Featuring a great supporting cast, lovely visuals, gorgeous costumes, and a fantastic score. It’s a film that explores the world of Jane Austen with a sense of irreverent humor and a study of social climbing as well as what women had to do to survive in a world where there’s a lot of expectations in the upper class. In the end, Love & Friendship is a tremendously rich film from Whit Stillman.

Thrilled that you got a chance to see this and loved it!! Agreed w/ everything you said Steven, though I think Xavier Samuels wasn't as memorable as others in this film. I absolutely adore Kate B here, and Stillman's writing is full of wit and humor. Delightful, absolutely delightful!

It was fun to watch as I saw it with a small audience at my local multiplex but there was some laughs as well as anything involving Tom Bennett who is so funny as Sir James. I'm just glad the film is doing well at the box office as it's unthinkable to think that a Whit Stillman film would be a box office hit. I really hope Kate Beckinsale gets some mentions come awards seasons as this is the best thing she's done so far.

I only saw this because I was a fan of The Last Days of Disco and it was cool to see Beckinsale and Sevigny reunite on screen. I enjoyed this a lot but I need to rewatch it with subtitles to understand the dialect better.

@TheVern-I hope to see it again as well and this time, with the subtitles as it was hard at first to keep up with the dialogue but that was what kind made the whole film fun to watch. I really hope Kate Beckinsale gets some accolades as I think this is the best thing she's done.