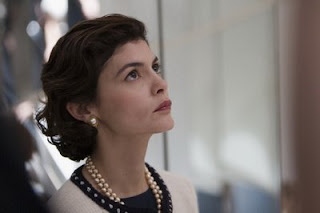 I've been meaning to see this movie for ages! Thanks for the great review!

You're welcome. I recommend it for anyone that is just interested in Chanel or unconventional bio-pics.

I saw this film but wasn't that much impressed, probably, because it was on TV and was interrupted by commercials a few times. I don't know if I ever decide to re-visit it but I loved how you described the camerawork here. It's a shame I didn't notice it then.

@Leysa-I don't recommend watching films with commercial interruptions. It ruins the pace of the film and for the viewer to be engrossed in the story.

It's worth a second look but make sure you watch it without interruptions.

Great review! I have to see this film now, I really love Audrey and I'm in the mood of watching biopics lately.

@Sati-This film is one of the better bio-pics out there because it only talks about a certain period in a woman's life and not her whole life. That's what makes great bio-pics stand apart from the rest.