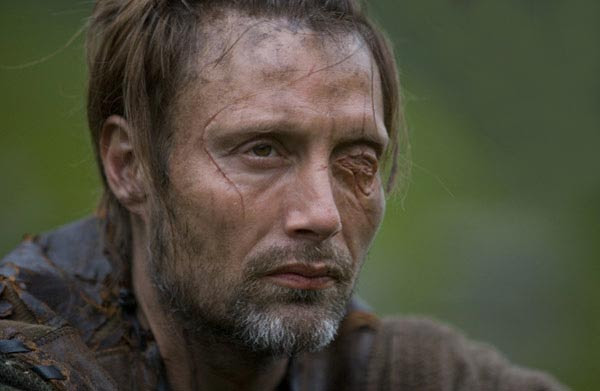 Directed by Nicolas Winding Refn and co-written with Roy Jacobsen, Valhalla Rising is the story of a mute Norse warrior who teams up with a young boy as they join a group of Christian Crusaders. In their journey, the two find themselves lost in an unknown land dealing with mysterious forces they couldn’t understand. Starring Mads Mikkelsen, Jamie Sives, Gary Lewis, Alexander Morton, Maarten Stevenson, and Ewan Stewart. Valhalla Rising is a harrowing yet visceral film from Nicolas Winding Refn.

Being captured as a slave, an unnamed yet mute Norse warrior (Mads Mikkelsen) is forced to fight for a chieftain named Barde (Alexander Morton) for profit. A young boy named Are (Maarten Stevenson) cares for the warrior that he calls One-Eye as they continue to trek the mountains until he escapes and kills his capture through an arrowhead he finds. With Are being the only survivor, One-Eye takes Are with him as they eventually meet a group of Christian Crusaders led by Eirik (Ewan Stewart). Eirik hopes to reach Jerusalem so he and his men could be saved as he asks One-Eye and Are to join them. The journey from the sea to the Holy Land would become treacherous due to a mysterious mist as a few men would die.

Upon arriving into a river where they encounter a land full of trees and mountains, the men wonder if it’s the Holy Land though many including the spiritual advisor Hauk (Gary McCormack) and Eirik’s right-hand man Kare (Gary Lewis) are unsure. Encountering more strange things, everyone becomes unsure as one of the men gets killed as many point towards One-Eye as the cause of what’s happening. With Kare and Eirik’s son Gorm (Jamie Sives) realizes that only One-Eye can save them, they would face the dark forces that has been surrounding them.

Set in the time of the Crusades as tribes try to find some world that they can inhabit, there is the one man who seems to be part of something different as he has no loyalty and no one to follow. Instead, he is a warrior that has been enslaved and taken for profit to kill other men only to escape with a boy who follows him. When they encounter a group of Christian Crusaders, only trouble occurs as the man and his young companion are seen as problems in a world that is very brutal.

The screenplay that Nicolas Winding Refn and Roy Jacobsen create is presented in six chapters reflecting the journey One-Eye takes from captive to mysterious warrior. There is little dialogue present throughout the film since the dialogue is often spoken by chieftains, other warriors, or Are who often speaks for One-Eye. The dialogue is often spoken about either about the Holy Land or about One-Eye as there is one piece of dialogue early in the film about how dangerous he is. The rest of the script is more about what One-Eye is seeing and doing as the lack of dialogue, exposition, and back-story allows the story to take its time and move quite seamlessly.

Refn’s direction is truly exquisite for the way he creates a film that is vast but also very gritty and unkind. Shot in the mountains of Scotland, there is an atmosphere about the landscape that is very rough as the film early on features One-Eye fighting in the mud. Throughout the film, there’s strange images of One-Eye looking on a mix of red and white to emphasize that something is going to happen. Once the film progresses, the film becomes more dream-like in the scenes where One-Eye, Are, and the Crusaders go on a boat trek through a misty body of water unaware of where they’re going. The look of it takes on different color palettes to express the tone of what is happening.

By the time they reach this beautiful land full of trees, sunlight, and rocky mountains, things seem fine but that isn’t the case. Instead, the forces they encounter become not just physical but emotional and mental as men kill each other. Paranoia ensues and the stakes to survive is much higher as Refn just let the film unfolds into becoming much more ugly and unforgiving. Throughout the film, Refn creates compositions that are truly hypnotic from a scene where One-Eyed is about to kill a man on a rock as if he’s lying a cliff. Others include some gorgeous wide shots of the landscape and surreal shots to emphasize the mind of One-Eye. Overall Refn creates a dazzling yet spectacular film that doesn’t play nice.

Cinematographer Morten Sorberg does an amazing job with the film‘s gritty yet stylized photography from the somewhat de-saturated look of the landscapes where things look brighter. The misty-boat scenes are great for its use of yellow-sepia and blue colors to present the sense of the unknown while the One-Eye fantasy sequences are mesmerizing for its disturbing look. Editor Matthew Newman does an incredible job with the editing to exemplify the film’s leisured pace while using fade-outs to help ease the transitions for its chapter breaks. Production designer Laurel Wear and art director Natalie Astridge do some excellent work on the small set pieces create such as One-Eye‘s cage and the boat that the Crusaders ride.

Costume designer Gill Horn does some great work with the costumes such as the fur and leather that many of the characters wear which is sort of reminiscent of what Vikings wore. Makeup designer Niamh Morrison does is amazing for its look of the mud-fight scenes as well as the fake tattoos created. Sound designer Giles Lamb does a superb job with the sound work to capture sparse sounds of the locations as well as its intimacy to maintain an unsettling tone. The film’s score by Peter Peter and Peter Kyed is brilliant for its dark-ambient score filled with ominous synthesizer textures and droning guitars to capture the eerie mood of the film.

The casting by Des Hamilton is phenomenal as it features some memorable appearances from Jamie Sives’ as Eirik’s more cautious son Gorm, Gary McCormack as Eirik’s longtime advisor Haug, Gary Lewis as the troubled spiritual advisor Kare, and Alexander Morton as the chieftain who captured One-Eye. Ewan Stewart is excellent as Crusaders chieftain Eirik who takes One-Eyed in only to be blinded by the idea that he’s doing God’s duty. Maarten Stevenson is superb as Are, the boy who speaks for One-Eye while being the only kind of soul that eases the mysterious warrior. Finally, there’s Mads Mikkelsen in a fantastic performance as One-Eye. Never speaking throughout the film, there is a chilling yet captivating presence that Mikkelsen creates for the character as he remains silent and focused. When it comes to fighting, Mikkelsen completely goes all out as he uses weapons and his body to defeat his opponent to be a full-on badass as it’s one of the Danish actor’s finest performances.

Valhalla Rising is an outstanding film from Nicolas Winding Refn featuring a mesmerizing performance from Mads Mikkelsen. The unconventional Vikings-period piece is among one of the best films of 2009 for its hypnotic direction and lack of a traditional script that keeps the audience in awe of the journey of One-Eye. Fans of these kinds of warrior-driven films might be put off by that lack of conventional style but will be amazed at what Refn does by simplifying it and bringing enough grit to satisfy these viewers. In the end, Valhalla Rising is a dirty yet thrilling film from Nicolas Winding Refn.

Absolutely incredible film. Quite demanding and inscrutable at times but I was absolutely hypnotized by it. Quite the viewing experience.

Agreed. I enjoyed it though I wished it was shown on another channel other than IFC. That channel sucks now with its stupid commercial breaks and lame shows now.