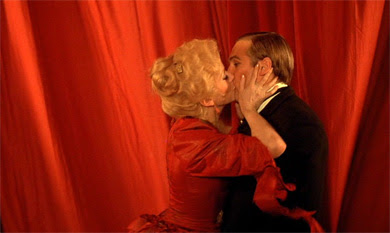 Directed by Francois Truffaut and co-written with Suzanne Schiffman, Le Dernier Metro (The Last Metro) is the story of a woman trying to hide her Jewish husband in a theater that they own during the German’s occupation of France in World War II. During this hideout, the woman tries to keep the theater going as she falls for an actor in a production they’re working on. Starring Catherine Deneuve, Gerard Depardieu, Heinz Bennent, and Jean Poiret. Le Dernier Metro is a glorious period film from Francois Truffaut.

It’s 1942 as the Germans have occupied France as rumors emerged that renowned theater director Lucas Steiner (Heinz Bennent) has fled France leaving his prestigious theater in the control of his wife Marion (Catherine Deneuve) and another theater director in Jean-Loup Cottins (Jean Poiret). Marion and Jean-Loup have been given instructions to run a new play called The Woman who Disappeared with notes from Steiner as they work with their regular group of workers and actors. One of the new arrivals is Bernard Granger (Gerard Depardieu) who has been a fan of the theater and wants to act as he successfully gets an audition.

While Marion is trying to deal with notorious critic Daxiat (Jean-Louis Richard), she also has been secretly hiding Lucas in a cellar under the theater so he can hear what is going on. With plans for Lucas to flee to Spain has failed, he decides to help out by giving notes in secrecy to Marion as he hears the rehearsals. With Bernard becoming the perfect leading man for Marion, he also secretly helps out a man named Christian (Jean-Pierre Klein) with work for the Resistance. Still, Bernard manages to win over the people as he tries to flirt with the women including young actress Nadine (Sabine Haudepin) and the set/costume designer Arlette (Andrea Ferreol).

With opening night happening and everyone nervous, the play ends up being a big success though Daxiat’s review was not surprisingly well-received. Though Bernard received praise in his review, he confronted Daxiat as he gets himself in trouble with Marion. With the play still going on as Marion becomes distanced towards Bernard, trouble brews as Gestapo forces are wondering if Lucas had really disappeared. When Bernard reveals to Marion about his involvement with the Resistance, she reveals the secret about Lucas as the three figure out what to do. With Bernard set to leave to join the Resistance and the theater in trouble due to Daxiat’s political connections, Marion begins to realize her feelings towards Bernard as the two try to come to terms with it.

The film’s title refers to the last subway train ride before curfew is imposed by the Nazis during their occupation of France in World War II. Yet, there’s brief mentions about that though it is really about an actress, her husband, and a group of people working at the theater trying to keep it going amidst the chaos of World War II. With help of a new actor, who is involved with the Resistance, a love triangle does start to emerge between this new actor, the leading lady, and her husband who is hiding at a cellar. Yet, Francois Truffaut doesn’t make the film about the love story but rather what these three people and various others do to keep this play together for the people of France in this time of trouble.

Truffaut and co-writer Suzanne Schiffman create a script that allows the audience to see how a play is created as well as the people involved in making it. Aside from the three principle characters, other characters such as the young ingenue, a new director, the costume/set designer, an elderly assistant named Germaine (Paulette Dubost) and a handyman named Raymond (Maurice Risch) help out in creating this play. Though no one knows about the fact that Lucas Steiner is under the stage listening to everything until Bernard learns about it late in the film. It’s as if they’re trying to keep things forward as if he is still there while dealing with a notorious critic and the Nazis who are trying to bring trouble.

Throughout the story, there are things that goes on that does play out casually about the creation of a play where Bernard tried to flirt with a few women while he would have these secret meetings with a Resistance agent. At the same time, there’s little moments throughout the story about how sets are made while Lucas gives out notes to Marion as he listens in. The script allows the characters to be more than who they are while there’s moments of frustration and anguish that goes on. Notably when everyone is trying to deal with the Nazis as they’re forced to not hire Jews though a young girl creating costumes does get a job in secrecy. The script is truly superb for the characters that is created as well as the situations that happens as well as the planning of the play.

Truffaut’s direction is truly potent in the way he creates a film that is about the creation of a play during World War II in occupied France. While it’s shot in a theater with some set pieces recreated for the period, Truffaut creates an intimacy to the direction where he lets the audience be engaged by what is happening. At the same time, he underplays the drama by letting things be a bit more upbeat except in more intense dramatic moments in the film. Particularly as the film has Nazis around though there are no scenes of violence except what is mentioned on paper and on the radio.

The scenes of the play does have a theatricality that is very entrancing to the way Truffaut and his actors tell the story of this woman haunted by the appearance of her son’s tutor. The staging and presentation is very haunting while the stuff that goes on from the audience and backstage makes it very interesting about their reaction. Even as the curtains close to see how the actors feel about each other or what is going on around them. There is a great sense of rhythm to how Truffaut plays up to the small amount of suspense as well as playing to the sense of longing in the way Marion and Bernard look at each other from afar. Overall, Truffaut creates a film that is enchanting for its gorgeous presentation and heartfelt approach to storytelling.

Cinematographer Nestor Almendros does a superb job with the film‘s lush yet colorful cinematography. Almendros’ exquisite work plays to the look of the red curtain for many of the scenes in the theater while creating a mix of gray and black with bits of color for the exteriors outside of the theater. For some dark interior scenes, Almendros’ approach to lighting by using candles or little electric lights allow the film to maintain a sense of beauty that is truly magical as his work is truly the film’s technical highlight. Editor Martine Barraque does an excellent job with the editing as she presents a very straightforward approach to the cutting while using fade-outs for the some of the films’ transitions.

Production designer Jean-Pierre Kohut-Svelko does a great job with the set pieces created for the stage play as well as the look of the theater and hangouts the characters go to. Costume designer Lisele Roos does a spectacular job with the clothes that includes the dresses the women wear including the more posh look of Marion with her fur coats and the red dress she wears for the play. The sound work of Michel Laurent and Michel Mellier is brilliant for the intimacy that is created on the stage to the sirens heard for air raids that pops up a few times in the film. The film’s score by Georges Delerue is wonderful for the wide range of moods it creates from some light-hearted moments with upbeat orchestral arrangements to a more ominous theme for scenes involving Bernard’s work with the Resistance and scenes relating to the Nazis.

The casting for the film is amazing with the ensemble that is created as it includes some appearances from Laszlo Szabo as a Nazi lieutenant, Richard Bohringer as a Gestapo officer, Jessica Zucman as the young Jewish costume maker Marion secretly hires, Martine Simonet as a black-market woman Raymond meets, Henia Suchar as Marion’s hotel chambermaid, Renata Flores as a German singer at a club, Franck Pasquier as a child actor in the play, and Jean-Pierre Klein as Bernard’s Resistance contact Christian. Other notable small yet memorable supporting roles include Maurice Risch as the funny yet loyal technician Raymond, Paulette Dubost as Marion’s elderly yet kind assistant Germaine, and Jean-Louis Richard as the politically-connected critic Daxiat.

Sabine Haudepin is very good as Nadine, a young ingenue who is trying to maintain her loyalty to the company while dealing with the numerous job offers she’s getting. Andrea Ferreol is wonderful as Arlette, the set/costume designer who tries to deal with the flirtations of Bernard as well as the demands of the play. Jean Poiret is excellent as Jean-Loup Cottins, the play’s director who tries to deal with the presence of Daxiat as well as trying to get the play in the same vision of Lucas Steiner. Heinz Bennent is superb as Lucas Steiner, a revered Jewish playwright who is forced to hide as he listens from a cellar on the rehearsals of his own play while dealing with the fact that he’s isolated with only Marion to talk to.

Finally, there’s the duo of Gerard Depardieu and Catherine Deneuve as they each give incredible performances in the respective roles of Bernard and Marion. Depardieu displays a wonderful sense of charm and sensitivity to a man who loves to act but also tries to deal with his role working with the Resistance. For the stage performance, Depardieu brings a very restrained yet hypnotic approach which really shows the complexity of his range as an actor. Deneuve gives a truly elegant performance of a woman dealing with everything as she also tries to help her husband in his isolated state. Deneuve also creates a stage performance that intense in its melodrama while proving to be very tough. While Deneuve has great rapport with her other actors, the scenes she and Depardieu have are magical as they really work off each other and seem to enjoy themselves as they’re a major highlight of the film.

Le Dernier Metro is a sensational yet entertaining film from Francois Truffaut. Featuring a top-notch ensemble cast led by Catherine Deneuve and Gerard Depardieu as well as great technical work led by Nestor Almendros’ rich cinematography. It is truly one of Truffaut’s finest films in his revered career for the way he creates a World War II period piece and making it into a compelling dramatic film. While it may not have the looseness of his early films of the 1960s, it is a film where Truffaut has refined his technique to bring something more to a World War II drama. In the end, Le Dernier Metro is a mesmerizing film from the late, great Francois Truffaut.

Francois Truffaut Films: The 400 Blows - Shoot the Piano Player - Jules & Jim - Antoine & Colette - The Soft Skin - Fahrenheit 451 - The Bride Wore Black - Stolen Kisses - Mississippi Mermaid - The Wild Child - Bed and Board - Two English Girls - Such a Gorgeous Kid Like Me - Day for Night - The Story of Adele H. - Small Change - The Man Who Loved Women - The Green Room - Love on the Run - The Woman Next Door - Confidentially Yours