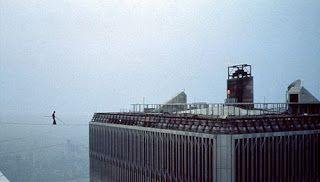 Man on Wire is the story of Philippe Petit’s 1974 high-wire walk between the Twin Towers of the World Trade Center in New York City. Directed by James Marsh, the documentary is about how Petit managed to do one of the most spellbinding moments of the 20th Century as Petit and many associates talk about how they planned it and everything else leading up to this monumental event. The result is a compelling yet magnificent film about one of the greatest feats of the 20th Century.

When Philippe Petit was only 17 years old during a dentist appointment, he read a magazine where he heard that New York City was building one of the world’s tallest building in the Twin Towers of the World Trade Center. Having already learned how to do tightrope walk a year earlier with great mastery, Petit hopes to walk the Twin Towers once it gets complete. With help from friends and girlfriend Annie, Petit would create illegal tightrope wire walks on such places as the Notre Dame Cathedral in Paris and the Sydney Harbour Bridge in the early 70s. Though he would get arrested for these tightrope walks, it would give him attention as he was just getting started.

When the World Trade Center opened in April of 1973, Petit and his team made plans about what to do as he traveled to New York City to see what to do. With some people including a few Americans, he realized the difficulty of staging a stunt like this as he would create diagrams of what to do. Petit and his team would go back and forth from Paris to New York City to plan and figure out what to do. Finally on August 6, 1974, Petit and his small team would to go the World Trade Centers pretending to be workers or businessman as two men would be in one tower and the other two at the other one. Hiding from security guards and rigging everything at night till morning, Petit would do an impossible feat as New Yorkers would watch from above as Petit does his walk between the Twin Towers.

The film is approached into varying styles in order to tell the story. While Petit and many of his associates including his ex-girlfriend Annie would provide insight into Petit’s personality and why he would do something as big as walk between the Twin Towers on a wire. Director James Marsh also gives the film something to stand out on his own as he re-enacts the day of the set-up to get into the roofs of the World Trade Center as if it was a heist film. The mesh of new interview footage, reenactments, old home footage, and pictures allow Marsh to realize what Petit and his team had to go through in order to make this feat impossible.

Philippe Petit is, without a doubt, an eccentric yet loveable man who likes to live on the edge but also have fun doing it. He’s not someone that is into danger as the tightrope walk represents something more than just performing. Instead, it’s about doing something that people can be mystified by and use as some artistic statement of sorts. Doing a stunt like walking between the roofs of the Twin Towers isn’t just about something of a personal dream but also something more as the World Trade Center itself wasn’t fully appreciated once it got complete. Though Petit knew he would be arrested and get into some trouble, it was worth it though the aftermath of the event would bring mixed feelings for Petit.

Marsh’s direction is outstanding for his presentation as the present-day interviews with Petit’s associates such as Annie, Jean-Louis Blondeau, David Forman, Alan Welner, Mark Lewis, Jim Moore, Barry Greenhouse, and Jean Francois Heckel all have some great insights on what to say. Petit himself reveals how he was able to get a tightrope between the Twin Towers which proved to be at times simple and complex. The latter of which involves the two other wires that would support the main one as Petit reveals what he must do in order for the walk and the wire he had to use to work successfully.

In the reenactments, Marsh re-created floors in order to reveal what Petit and his friends were doing on the day they were trying to rig while opening the film with this amazing recreation sequence of the team driving to the World Trade Center. Marsh also creates some light-hearted moments to make the film less dramatic and balance it with bits of humor. The overall presentation with the use of photos to show Petit’s famous walk is truly a jaw-dropping moment as Marsh creates what is definitely a stunning yet powerful documentary.

Cinematographer Igor Martinovic does an incredible job with the film‘s black-and-white photography for the reenactment scenes while using a more colorful look for the interviews. Editor Jinx Godfrey does a superb job with the editing in creating rhythmic cuts and layers to move the film back-and-forth from reenactments to old footage leading up to the Twin Towers walk itself. Sound editors Claire Ellis and Lisa-Marie McStay do great work with the sound to capture the intensity of the reenactments as well as the intimacy in the interviews.

The film’s score by Michael Nyman, with pieces by Josh Ralph, is among one of the film‘s highlights as Nyman‘s plaintive, piano-driven score plays to the sense of innocence and drama that goes on. Ralph’s pieces for the reenactments help provide the suspense with its orchestral flourishes while the rest of the film’s soundtrack classical pieces by Edvard Grieg and Erik Satie to pop pieces like Walter Murphy’s A Fifth of Beethoven and Fleetwood Mac’s Albatross. The music that is provided helps add to the sense of ambiance into what Petit is doing in his tightrope performance.

Man on Wire is a brilliant yet enchanting film from James Marsh about Philippe Petit’s tightrope walk of the Twin Towers in the World Trade Center. The film is definitely one of the most engaging and stylish documentaries created through its mix of reenactments, old footage, photographs, and interviews recalling this great event. Particularly for something that seemed impossible as a man did something that defies the odds as people on the ground watch in awe. In the end, Man on Wire is a captivating yet hypnotic film from James Marsh.

I've got issues with fear of height myself, and even watching people walking on wire makes me feel dizzy. This is a movie I love as much as I dread to see it, if you get it. If I ever get the chance, I'll grab it. I've actually checked out my library in the hope they'd have it in their quite extensive collection, but alas not.

This was quite scary to watch considering what Petit was doing all the way up in the air. I would've been scared as shit. Yet, the fact that he was brave enough to do it takes balls. I hope to get this on DVD soon as I've just put into my list of the best films of the 2000s.

I'm not even sure there's anything to say about Man on Wire as a film. It's the act itself, dazzling in its audacity and beauty that leaves me breathless. It's truly, truly stunning and I would recommend this movie to anyone.

@prettycleverfilmgal-It stunned me from first frame. That picture alone is just jaw-dropping. I don't think anyone will create a feat like that again. Philippe Petit is pretty in my list in the Hall of Fame of Awesomeness.

I watched this a couple of weeks ago. It is extraordinary. One of my favourite documentaries, ever!

@Andy-It's in my personal list of the best docs ever.