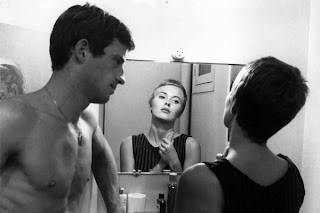 Written and directed by Jean-Luc Godard (with additional writing from Francois Truffaut), A Bout de Soufflé (Breathless) is the story of a criminal on the run who meets up with his American girlfriend as they fund a trip to go to Italy. The film is Godard's first feature film that would help kick-start the French New Wave that would become of the key movements for 1960s international cinema. Starring Jean-Paul Belmondo and Jean Seberg with a supporting cast that includes Liliane David, Daniel Boulanger, and Jean-Pierre Melville. A Bout de sSouffle is a stylish yet entertaining film from Jean-Luc Godard.

Michel Poiccard aka Laszlo Kovacs (Jean-Paul Belmondo) has just stolen a car as he drives through France on his way to Italy After a cop chases and stop him, Poiccard shoots him and returns to Paris to meet with his Italian friend Minouche (Liliane David) for money. She refuses as he steals from her as he meets his American girlfriend Patricia Franchini (Jean Seberg) selling the New York Herald Tribune in the streets of Paris. They briefly talk as she reveals she has to meet someone later tonight as it would help become a journalist as Poiccard decides to meet with Mr. Tolmatchoff (Richard Balducci) at a hotel for some money. After the meeting, Tolmatchoff is met with a detective (Daniel Boulanger) about Poiccard's whereabouts. Poiccard meets up with Patricia as he steals another car to take Patricia to her meeting with a man named Carl Zombach (Roger Hanin) for an interview with novelist Parvulesco (Jean-Pierre Melville).

After the meeting where Poiccard watches Patricia the entire night who spends the night with Zombach as he goes to her apartment. She returns that morning as she finds Poiccard as they talk about various things including William Faulkner's Wild Palms as she asks Poiccard about the final sentence of the book. After making love, Patricia leaves for her interview with Parvulesco while Poiccard calls Antonion Berrutti (Henri-Jacques Huet). Patricia's interview with Parvulesco proved to be a big moment for her as she got him to ask answer a question of ambition where he replies, "To become immortal, and then die". Poiccard however, is on the run as he steals another car to pick up Patricia as she is being questioned by a detective about Poiccard's whereabouts. With another detective tailing her, she meets with Poiccard as they hide out as he plans to leave for Italy with her tagging along. Yet, Patricia becomes unsure about Poiccard as she is forced to make a drastic decision.

The film is about a small-time criminal who wants to escape to Italy with his American girlfriend by doing small crimes while she is aspiring to be a journalist. Throughout their journey, they delve into ideas of existentialism that is heightened by a book from William Faulkner and the question that Patricia gives to a novelist. Throughout the film, there's moments where the Michel Poiccard character is commenting on his situations and musing about everything from France to being a criminal. What Jean-Luc Godard creates with the story is where everyone is trying to get somewhere as both Patricia and Michel are two people who are in love but leaning towards different directions. Michel wants to escape to Italy but Patricia is just at a point where she is about to reach her own goal as a journalist.

The lack of a conventional script allows Godard to create a film that is very loose in structure and tone. Shooting in a style that would later be defined as cinema verite, a loose documentary style where everything is shot on location, the film has a look and feel where everything seems real just as it's all happening on screen. Yet, Godard does manage to create some amazing scenery such as Patricia's monologue sequence where she talks about her own plans as the camera moves slowly as she's walk towards it. The mix of a controlled yet more technique driven style of filmmaking mixed in with something that's more loose and improvised works very well in what Godard aims for. There is a great sense of style that really engages the viewer with what is happening. Overall, it is a spectacular debut made only from the vision of Jean-Luc Godard.

Helping with Godard on the cinematography is Raoul Coutard whose hand-held, naturalist black-and-white camera work plays up to the looseness of the film. The cinematography is both rich but also raw in its presentation as it adds to the realistic feel of the film as Coutard's photography is a major highlight of the film. The editing by Cecile Decugis and Lila Herman are very influential, notably for its jump-cut edits. The best example of that is during the car scene where Coutard’s camera is shooting behind Seberg’s head during the sunlight and then cuts to a similar shot without the sunlight and then back to the shot with sunlight. The editing has a rhythmic feel of the film while playing with Coutard’s cinematography and Godard’s direction.

The film’s sound by Jacques Maumont is very fresh for the way it sounds so real without manipulating the audience that everything sounds false, notably the parade scene in the third act of the film. The film’s score by Martial Solal has a very playful, jazzy score that has this melodic riff that will be playing on your head throughout the film. It’s one of the best scores that is ever assembled for its mix of orchestral pieces and the French pop music of the time.

While the film has a small cast of actors in fine performances in the smaller roles from Liliane David, Roger Hanin, Richard Balducci, Henri-Jacques Huet, and Jean-Luc Godard himself in a role of the informer. The film’s supporting cast really shines in two more well known characters, the detective by Daniel Boulanger and Jean-Pierre Melville’s Parvulesco. Boulanger’s performance of the detective is a very straightforward parody of the detectives in the past while he brings an eerie presence to the film while he chases Belmondo’s Michel character. The legendary filmmaker Jean-Pierre Melville is amazing in the role of Parvulesco with his witty intelligence and theories of men and women and how love is a form of eroticism and vice versa in what is easily, one of the most memorable performances of that film.

Then in the leading roles, Jean-Paul Belmondo and Jean Seberg are exquisitely divine in their respective roles while they carry off a fresh, complex chemistry that is witty and ambiguous in their characters, which at times are unlikable but fun to watch. Belmondo is extremely funny and charming in his role of Michel with all of these Bogart references of cigarettes and lip-rubbings while bringing intelligence that can be mean but very relevant in today’s world. The late Jean Seberg is extremely loveable in the role of Patricia where she brings this smile that you so love and she has this individuality and wisdom that is almost pre-feminist while later in the film, she has this conflict in her character that audiences can relate into what is truly an iconic performance.

In the 2001 Winstar Video DVD release with Fox Lorber Films, the DVD overall is a bit disappointing since the film is presented in a full-screen format. Plus, the special features are very minimal with its subtitle controls, scene access, and weblinks relating to Godard and the French New Wave, and the filmographies of Godard, Seberg, and Belmondo. The best feature is a running audio commentary from film critic/Godard historian David Sterritt who talks a lot of the film’s technical achievements and pop culture references along with Godard’s love for cinema and a bit of the French New Wave.

A Bout de Souffle is an extraordinary film by Jean-Luc Godard featuring amazing performances from Jean-Paul Belmondo and Jean Seberg. Audiences who are new to Godard and the French New Wave will no doubt see this film as a great place to start. Particularly as it was a film made a time when cinema was seemingly becoming more extravagant and out of touch with reality as Godard and the French New Wave would bring it back down to Earth. The film is among one of Godard's key films of his prolific yet chaotic career that has him going from narrative-driven films to strange, offbeat experimental features in recent years. In the end, A Bout de Souffle is an exciting yet riveting film from Jean-Luc Godard.

I really need to catch up Godard's films. I am planning to watch Bande A Part in the next week, so hopefully that will get the ball rolling for me. Plus, I need to see Breathless for my "must see list" series.

Same here. This is still the only Godard film that I've seen in its entirety.

Fortunately, I've managed to DVR both Bande a Part and Made in U.S.A. these past few months so I'm going to watch both films this coming week.