LAMB Movie of the Month: Bande a Part 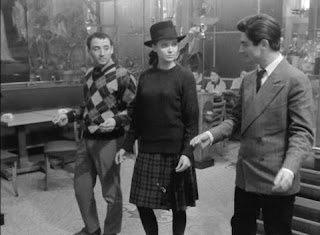 Written and directed by Jean-Luc Godard, that is based on the novel Fool‘s Gold by Dolores Hitchens, Bande a Part (Band of Outsiders) is the story of a young woman who meets two wannabe criminals as they go into an adventure around Paris figuring out how to do the perfect crime. The film is among one of Godard’s finest films of his revered period of the 1960s during the French New Wave as it would prove to be influential to many filmmakers. Starring Anna Karina, Sami Frey, Claude Brasseur, and Louisa Colpeyn. Bande a Part is an extraordinary film from Jean-Luc Godard and company.

Franz (Sami Frey) and Arthur (Claude Brasseur) are wannabe criminals seeking a break as they learn about a substantial amount of money in the home of a woman named Madame Victoria (Louisa Colpeyn). Befriending the woman’s niece Odile (Anna Karina) whom they met in English classes, the men let her know what they plan to do as she reveals that the money belongs to a lover of her aunt. Odile reluctantly helps in the planning as she falls for Arthur, in whom she had never met before, while the two and Franz continue to plan while doing various things in Paris.

After a night with Odile, Arthur gets himself in trouble with his uncle (Ernest Menzer) who asks for money prompting Arthur to act quickly. The plans he, Franz, and Odile have are suddenly falling apart as they figure how to move quickly. The first attempt in the evening goes wrong as Arthur decides to make a second attempt the next day before his uncle decides to do the job himself. With the next attempt happening, Franz is consumed with guilt while Odile becomes disillusioned with the ordeal as things start to fall apart.

The film is essentially about two criminals and a young woman getting together to create the perfect crime to steal some money so they can buy some happiness. Inspired by American crime films, Jean-Luc Godard allows the film to play up the conventions of the crime movie by having two guys, who watched a lot of those films, try to create a crime of their own. They have a target, an accomplice, and motives to want to steal all of this money from the lover of a woman who lives in a rich house. Along the way, Godard narrates throughout the film about the events that is happening along with brief thoughts about what the characters are feeling and such.

The deconstruction of the crime film with all of its planning and the act itself allows Godard to create something that is very loose and lively. At the same time, he wants to focus more on the three criminals that are planning this crime where a love triangle sort of happens. Franz is a young man that comes up with the idea as he starts off as the dominant figure only to realize that it takes a lot more to be a criminal. Arthur is someone who is more determined as he ends up becoming much darker though he shows a sensitive side in the way he deals with Odile whom he falls for in the film. Then there’s Odile who becomes the reluctant accomplice who goes to English classes so she can please her aunt and become a nurse. For her, it’s about getting the money to be free of her aunt though the experience later on would have her question her own morality.

The lack of a conventional script allows Godard to direct the film very loosely in the style that he’s known for in his films of the 1960s. This style of shooting on location and letting things happen naturally is part of what Godard does in order to make the film seem like it’s actually happening. At the same time, he allows the film to let things happen as if he uses it to kill time such as a scene where a moment of silence happens where no sound occurs. Other notable famous scenes include a dance scene where music plays while Godard comments on what the characters are feeling and a scene of the three characters running through the Louvre to break a record.

These iconic scenes help move the film very seamlessly without distracting itself from the narrative as it’s all for the characters to kill time as they plan out their criminal activity. Godard also creates some amazing compositions for the audience to be engaged by what is going on while maintaining that free-wielding filmmaking style. Overall, Godard creates what is truly an exciting yet intense film that subverts the crime film by adding some humanistic themes and some humor.

Cinematographer Raoul Coutard does a fantastic job with the film‘s black-and-white photography that is truly stylish for many of its exterior settings without being too grainy as it is one of the film‘s technical highlights. Editors Francoise Collin, Dahlia Ezove, and Agnes Guillemot do a great job with the editing in maintaining a straightforward though rhythmic approach to the pacing while keeping up with its energetic feel from its jump-cuts. Costume supervisor Christane Fageol does a very good job with choosing the clothes the characters wear such as Franz‘s trench coat and the sweaters that Odile wears.

The sound work by Antoine Bonfanti and Rene Levert is excellent for its naturalist approach along with gun shots and the music that is played while taking the sound out for its minute of silence scene. The film’s score by Michel Legrand is phenomenal for its array of styles ranging from plaintive string pieces to flourishing piano cuts to play up the film’s witty tone.

The casting is brilliant as it features some memorable appearances from Daniele Girard as the English teacher, Chantal Darget as Arthur’s aunt, Ernest Menzer as Arthur’s uncle, and Louise Colpeyn as Odile‘s posh aunt. Sami Frey is wonderful as Franz, the organizer of the theft who tries to flirt with Odile only to realize what it takes to truly become a criminal. Claude Brasseur is superb as Arthur, the aggressor of the group who charms Odile while showing a darker side when he is pressured into stealing the money. Finally, there’s Anna Karina in an enchanting performance as Odile. Karina’s performance is very lively as a young woman seeking adventure in crime while coming to terms with the fact that she’s an accomplice to something that goes very wrong as it’s one of Karina’s most iconic performances.

Bande a Part is a mesmerizing yet glorious film from Jean-Luc Godard. The film is definitely one of Godard’s finest films of his career as well as one of his most accessible of the period from 1960 to 1967. Anyone interested in Godard and the French New Wave will find this film as a nice introduction though A Bout de Souffle and Francois Truffaut’s The 400 Blows are much better intros. Yet, it’s also a great introduction for anyone interested in Godard’s great collaboration with Anna Karina, who was his wife at the time, as it’s one of the best director-actor collaborations. In the end, Bande a Part is a fun yet enthralling film from Jean-Luc Godard.

Nice work, like always you've written a very thorough review. You are right about the cinematography being a technical highlight, especially because in those days movie cameras weren't exactly portable devices.

That's because Godard favored something that felt real and Raoul Coutard was the right cinematographer at that time. His work definitely felt loose and captured the energy of the film which is why I love it so much.