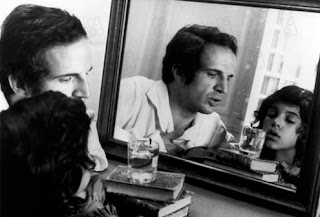 Based on the novel by Dr. Jean Itard, L’Enfant sauvage (The Wild Child) is the true story of a late-18th century doctor trying to help a child who had been raised in the woods. In hopes to civilize him, the doctor tries to figure out how to help a boy that seems lost. Directed and starring Francois Truffaut as Dr. Jean Itard with an adapted script written by Truffaut and Jean Grualt, the film is an examination of a man trying to help a boy who was lost in a world outside of humanity. Also starring Jean-Pierre Cargol, Francoise Seigner, and Jean Deste. L’Enfant sauvage is an extraordinary yet touching film from Francois Truffaut.

A young, naked boy (Jean-Pierre Cargol) is trekking for food around the woods as he has scared a woman gathering food. With hunters and dogs capturing the boy, his odd yet savage behavior has been the talk of the town. The news of the boy has reached Dr. Jean Itard at a Parisian school for deaf-mutes who is eager to learn about the boy. Once the boy arrives to the school, he is treated badly kids and an opportunistic orderly as Dr. Itard asks Professor Philippe Pinel to take the boy in his care. Pinel reluctantly does so as Dr. Itard takes the boy to his home as he and his maid Madame Guerin (Francoise Seigner) care for him.

In hopes to create a report on the boy, Dr. Itard, with Madame Guerin’s help, try to civilize the boy as he starts to act less savagely. Dr. Itard attempts to educate the boy, now called Victor, in hopes he can become civilized though progress becomes slower than Dr. Itard had realized. During these lessons, Dr. Itard and Madame Guerin patiently help Victor act human as Dr. Itard uses methods to educate the boy to try and speak or to read. Despite the slowness of Victor’s ability to learn, Dr. Itard realizes that the boy is able to become human.

The film is about a doctor in the late 1798 trying to help a young boy who had been found in the woods and act like a savage. During the course of the film, Dr. Itard narrates the film to explain the progress of Victor as well as reveal his own frustrations and fears. Though there’s not a lot of dialogue in parts of the film to express Victor’s lack of ability to speak properly, it does help engage the audience to understand the behavior of the young boy as well as Dr. Itard.

Francois Truffaut and co-screenwriter Jean Grualt create a script where it’s all about a man trying to study this savage boy in the idea that he can help him. Placed at a time when people who might seem deaf and dumb to be inadequate, the script does give in to the idea of how society would be interested in a child like Victor for selfish reasons. Yet, it’s in Dr. Itard and his willingness to help the boy that makes the story very compelling. While Dr. Itard is a flawed man who has a hard time trying to understand Victor’s behavior as well as the fact that his attempt to be stern comes with consequences. It’s only for Dr. Itard to see what he is trying to do though he admits to his own reluctance in being disciplinary to the boy. The script works since it is study of a man struggling to do what is right for a troubled boy and his idea that anyone can be helped no matter the circumstances.

Truffaut’s direction is superb for the way he allows the film to start off very loosely with little-to-no dialogue to emphasize Victor’s animalistic behavior. While it’s a film set in 1798, the set pieces are sparse in favor of a lot of scenes in that are set in a countryside. It’s all about Truffaut creating an environment where Victor can roam as Dr. Itard observes what is happening. While Truffaut goes for a much more straightforward approach in terms of framing and creating scenes. He also adds a bit of style to the filmmaking such as an iris zoom shot in order for the audience to see Victor progressing into a human being. Yet, Truffaut remains the observer throughout the film as he shoots Victor from afar whenever the boy is alone to ponder what the boy is doing. It’s truly touching in the way Truffaut directs with such a simple presentation as the overall work that he does is magnificent.

In his first collaboration with Truffaut, cinematographer Nestor Almendros does a gorgeous job with the film’s black-and-white photography. Almendros gives the film a majestic look for many of the film’s exterior scenes that involves lots of shots in the forest as well as a wonderful mix of black, white, and gray for the rainy scenes. For scenes that just involves candlelight, Almendros creates a look that is very simple yet entrancing without overstating the scene or underplaying it. Almendros’ photography is a real highlight of the film as the work he put was among one of the reasons why Terrence Malick wanted him for Days of Heaven.

Editor Agnes Guillemot does an excellent job with the editing which is mostly straightforward though fade-outs and iris closures are used as transitions which help the film out quite smoothly. Set decorator Jean Mandaroux does a very good job with the look of Dr. Itard‘s home as well as some of the props created for the film. Costume designer Gitt Magrini does a wonderful job with the costumes to complement the period of 1798 while letting Victor wear something simple. The sound work of Rene Levert and mixer Alex Pront is great for emphasizing a calm environment for the nature scenes as well as playing to the way Dr. Itard is studying Victor‘s hearing. The film’s music is largely dominated by the works of Antonio Vivaldi which is amazing as it plays to the sense of innocence that surrounds the relationship between Dr. Itard and Victor.

The casting is brilliant as it features appearances from filmmaker Claude Miller and his wife Annie as friends of Dr. Itard, Mathieu Schiffman as an opportunistic orderly at the deaf institute, and Jean Daste as Dr. Itard’s mentor Professor Pinel. Francoise Seigner is great as Madame Guerin, Dr. Itard’s maid who acts as a maternal figure for Victor as well as a conscience for Dr. Itard. Francois Truffaut is excellent as Dr. Itard as Truffaut gives a compassionate yet determined performance as man trying to help out this poor boy while realizing how hard it will be. Finally, there’s Jean-Pierre Cargol who is phenomenal as Victor. Though he barely speaks a word in the film, Cargol is just outstanding for the way he is able to create a character whose performance that is entirely physical and using hand gestures to communicate. It’s one of the best performance ever created by a child as well as one of the toughest on film.

L’Enfant sauvage is an incredible film from Francois Truffaut featuring a mesmerizing performance from Jean-Pierre Cargol. The film is definitely one of Truffaut’s finest films of his career for the way he creates a sensitive story about Dr. Jean Itard’s study of this savage boy. The film is also one of Truffaut’s more accessible films as it has a simple approach to storytelling that appeals to a wider audience as it’s something that kids could be able to see. In the end, L’Enfant sauvage is touching yet exhilarating film from Francois Truffaut.

Francois Truffaut Films: The 400 Blows - Shoot the Piano Player - Jules & Jim - Antoine & Colette - The Soft Skin - Fahrenheit 451 - The Bride Wore Black - Stolen Kisses - Mississippi Mermaid - Bed and Board - Two English Girls - Such a Gorgeous Kid Like Me - Day for Night - The Story of Adele H. - Small Change - The Man Who Loved Women - The Green Room - Love on the Run - The Last Metro - The Woman Next Door - Confidentially Yours