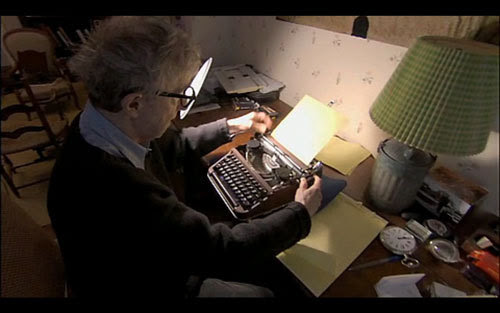 With 2011 coming to an end as I'll be posting some of my last reviews for the year as well as my 2-part list of the Most Anticipated Films of 2012 this week as well as my Auteurs profile on Lynne Ramsay. It's time to reveal what will I be doing for the upcoming new year aside from continuous work on various screenplay projects that I'm doing.
Essays have become a new outlet for me as whenever I have a review in the work or trying to work on my screenplay ideas. It gives something to fill in when I'm not doing anything and I can have the time to work on these essays sporadically. I have no real deadline and I can pretty much do things I wasn't really able to do during my time at Epinions.com years ago. Since I decided to go blogging, writing essays wasn't even something I had in mind. Now that I've written five Auteurs pieces, three film essays, and an albums essay. I realize that I have a lot more to say that is outside of the confines of a review.
The Auteurs essays have become a big deal for me where I'm allowed to profile a filmmaker than I love and get a chance to dissect into their works and what makes them so revered. Yet, it wasn't an easy thing to do as I would wait for new projects from them to emerge which led to some problems as far as having them released. That is something as I've decided to do as some of the filmmakers I decide to profile for 2012 will have new releases. Instead of waiting to profile them in anticipation for their new film, I decide just to say something about their work while make brief mentions of what they have in store soon. For some of the choices I've made, there's filmmakers whose work I'm familiar with but either haven't seen their entire work or have seen everything they've done so far. Then there's those whose work I'm interested in and want to have the chance to see why they're so revered as it gives me the chance to make some discoveries. Here are the filmmakers I will explore for 2012:
January-Lars von Trier
February-Wes Anderson
March-The Coen Brothers
April-Guillermo del Toro
May-Alfonso Cuaron
June-Nicolas Winding Refn
July-Christopher Nolan
August-Andrei Tarkovsky
September-Paul Thomas Anderson
October-Sergio Leone
November-Quentin Tarantino
December-Stanley Kubrick
Then there's the Favorite Films essays that I started to really get into as it gives me the chance to say my piece on why I love these films and such. Some of the choices I made are films that have reached a certain anniversary while others are films that came out recently that I've grown to love. Here are the films I will write about:
January-Secretary
February-Chungking Express
March-Never Let Me Go
April-The Wrestler
May-Y Tu Mama Tambien
June-Morvern Callar
July/August-The Dollars Trilogy
September-Boogie Nights
October/November-Trois Couleurs Trilogy
December-A Clockwork Orange
I should note with any essay or project that they all are likely change depending on my mood and such or some form of interest as I'm still thinking about writing other essays or some variation of it into another subject relating to films that suck. I'm still not sure if I'll do it but it might pop up. Then there's marathons as I'm still doing an unofficial marathon of films of the 2000s in which I hope to create a list of the 250 most essential films of 2000-2009. Yet, I'm also going to still do my Cannes Film Festival marathon in May though selecting the films might be harder to do as I no longer have the Sundance Channel.

Then there's a marathon that I have decided to do right up till November of 2012 in anticipation for the release of Skyfall which will be the James Bond marathon where I plan to do the entire James Bond series from in chronological order that will start off with the True Bond documentary and then go from the original 1954 Casino Royale TV program right up to the release of Skyfall in November when it comes out in the U.S. This will also include the 1967 Casino Royale spoof and the 1983 non-EON Bond film Never Say Never Again.
That's pretty much it in terms of what I'll be doing for Surrender to the Void for 2012 other than doing the usual film review, monthly LAMB actor's profile, and blogging around stuff. Then there's my music blog in The Void-Go-Round where there hasn't been a lot of activity as of late. It's my fault for being caught up on the Loveless essay where I veered off track from finishing up work on reviewing the entire body of work on My Bloody Valentine. I will get back to that in January hopefully as I'm also trying to find a way to balance both films and music.
There's a lot that I want to do in writing music reviews as I've felt I reached a peak in 2009 where I explored the works of acts and genres quite thoroughly where it put me on top at Epinions.com at the time though I now felt that the reason I succeeded was because I really had no competition nor anyone to be challenged by at the time. There's some music reviews here at Surrender to the Void that I plan to move to the Void-Go-Round while there's a slew of artists and acts that I want to explore. Here are some of those acts/artists whose discography I hope to divulge into: Kraftwerk, Spacemen 3, Spiritualized, Joy Division/New Order, Depeche Mode, the Happy Mondays, M83, the Magnetic Fields, the Clash, and many others.
That's pretty much all I can think of for now though I have gone back and forth about doing some hip-hop as a chance to get out more out of my comfort zone. Yet, I've come to the conclusion that I'm not really ready to do that though there are albums from that genre I do enjoy. Then there's my Favorite Albums series which I've finally gotten to do with Loveless which turned out to be a lot of fun. I decided that I'm going to do more of those so I can give these records a chance to reveal why they're so awesome. Here's the list of albums that I will profile:
January-David Bowie-Hunky Dory
February-Elvis Costello & the Attractions-Imperial Bedroom
March-Wilco-Yankee Hotel Foxtrot
April-Nine Inch Nails-Year Zero
May-Beck-Sea Change
June-The Stone Roses-S/T
July-Radiohead-OK Computer
August-Bob Dylan & the Band-The Basement Tapes
September-The Sex Pistols-Never Mind the Bollocks: Here Comes the Sex Pistols
October-U2-Achtung Baby
November-Iggy Pop-The Idiot
December-Pink Floyd-The Wall
Well, that's pretty much it for what will probably happen in 2012. Let's just hope it will be a very good year for all.
Posted by thevoid99 at 12:24 PM

Wow, that is an impressive schedule you have lined up for 2012. I can barely keep myself on track for a week in advance never mind a year.

Looking forward to reading a lot of these essays and profiles. Some of those are my favorite directors/films/albums as well.

Thank you. I've been thinking about what I want to do for the new year just so I can have something to do other than write reviews and hopefully get better as a writer.