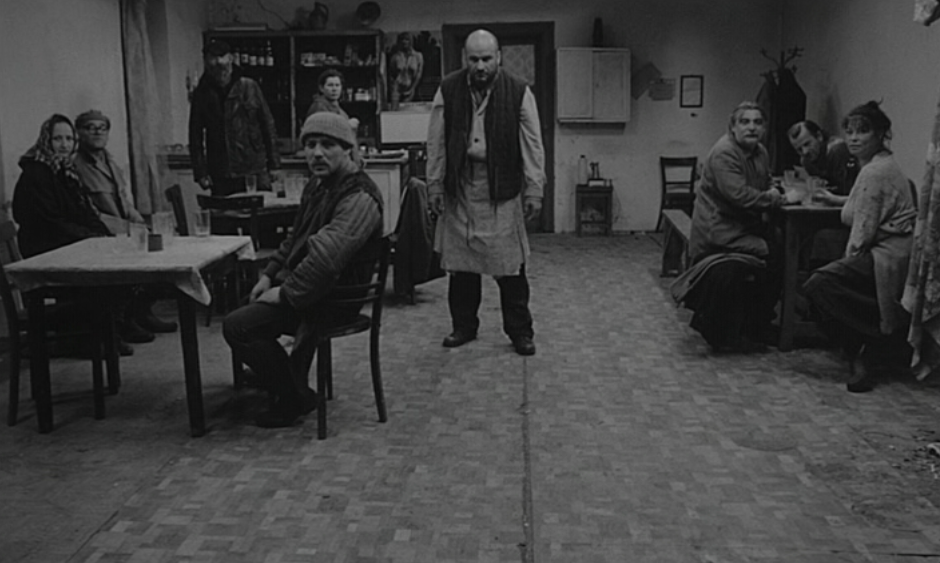 Based on the novel by Laszlo Krasznahorkai, Satantango is the story of a collective farming community closing down in the final days of Communist Hungary as a group try to leave only to be stopped by strange circumstances. Directed by Bela Tarr and screenplay by Tarr and Krasznahorkai with a screen story by Mihaly Vig, Peter Dobai, and Barna Mihok, the film is an meditative exploration into a world that is ending as they endure a series of events that would change their lives. Starring Mihaly Vig, Putyi Horvath, and Laszlo Lugossy. Satantango is a mesmerizing yet ominous film from Bela Tarr.

Set in the final days of Communist Hungary, the film explores a group of people living in a desolate farming community that is in absolute ruins as they learn that two men who were presumed dead have returned and to reclaim the community. It is told in twelve chapters where a group of people deal with the return of two men as well as the bleakness of their surroundings as they try to pull together all they have left. While coping with the arrival of Irimias (Mihaly Vig) and his friend Petrina (Putyi Horvath), a lot of things occur where a lot of mistrust and tension begin to emerge as Irimias would make his arrival with news about his plans causing a lot of suspicion. It’s a film that doesn’t have a traditional narrative as it essentially follows the steps of a tango which is six steps forwards and six steps back which is odd for a narrative structure. Yet, the film’s script prefers to play with that structure and to tell this story of a world that is collapsing as the people who live in this farming community have no idea what is going to happen.

The film is told from several perspectives such as six couples, a child (Erika Bok), an ailing doctor (Peter Berling), and several other characters. It all plays into this world set in this desolate farming community that is very removed from the rest of the world as they’re dealing with heavy autumn rain and gathering whatever money that is left. Unfortunately, there is also distrust as Schmidt (Laszlo Lugossy) is suspicious that his friend Futaki (Miklos Szekely B.) is sleeping with Mrs. Schmidt (Eva Almassy Albert) who has grown tired of the farming life as the other residents would cope with alcohol at one point in the film. Yet, the film’s script also have these moments where there’s a scene that is happening while something else is happening at the same time but in another chapter such as the doctor’s encounter with the child Estike who would watch the residents dance in a drunken manner. Plus, there’s a sequence where residents would leave their farming community following their meeting with Irimias as he would walk back to the city with Petrina and their friend Sanyi (Andras Bodnar) about their plans.

Bela Tarr’s direction is truly entrancing not just in the way he would compose the film but also maintain a sense of minimalism in his presentation. Yet, it’s a presentation that will not be everyone’s cup of tea as Tarr strays away from many of the conventions of cinema as a film with 432-minute running time only features a total of under 200 shots and shots that range from 8-11 minutes in total. Much of it involves a lot of gazing shots of these dreary and damp locations set in a world that is just completely removed from the modern world. Tarr’s direction includes a lot of these very stylized tracking and dolly shots to capture the world such as the opening eight-minute shot of a herd of cows walking into this desolate land as it would set the tone for everything that is to come from the film.

While there are a lot of close-ups, medium shots, and some beautiful wide shots, it is presented in a manner that is quite meticulous in its approach to framing yet there’s a looseness in how some of the actors would play out in a scene such as the drunken dance at this small restaurant. Some of it would include these elaborate crane shots that are very entrancing to watch as it plays into not just the lives of people that might seem ordinary but also in how they cope with their situations and the impending uncertainty of what is to come. Many of the shots and presentation do take a while to get things going as it’s pacing is very slow where it definitely isn’t for everyone. Especially as there’s moments in the film that doesn’t feature any dialogue while the music score is only used sparingly as it adds to this unconventional presentation that will annoy the most impatient viewer.

The direction definitely broadens itself in the many stories and characters that it has where Tarr definitely goes to great lengths to flesh out many of the characters as well as fill as many ambiguities into the actions of Irimias and the struggle of the doctor who is only seen briefly as he is sort of this outsider that either doesn’t know about Irimias or is in denial of what is happening. There is so much that occurs in the story that includes Estike trying to torture her cat in an act of rage because she’s being neglected. It is Tarr showcasing a world that is removed from everything else as time doesn’t even exist in some cases where they would all embark into an uncertain future while many of Irimias’ intention becomes more ambiguous as it goes on as it relates to what is happening behind the scenes. Overall, Tarr crafts a very chilling yet intoxicating film about the final days of a farming community in Communist Hungary.

Cinematographer Gabor Medvigy does amazing work with the film‘s very grimy black-and-white photography to not just find beauty in this very ugly and depression location but also in the intimacy in some of the lighting as it is one of the film‘s major highlights. Editor Agnes Hranitzky does terrific work with the editing as it‘s very straightforward with very few elements of style as it only cuts to capture some of the dramatic impact. Production designer Sandor Kally, with set decorators Sandor Katona and Bela Zsolt Toth, does excellent work with the set design from the look of the homes many of the residents live to the restaurant and city offices that are present in the film.

Costume designers Janos Breckl and Gyula Pauer do nice work with the costumes as it‘s mostly ragged with the exception of Irimias who carries this look of coolness with his Fedora hat. Sound mixer Gyorgy Kovacs does fantastic work with the sound to play into the texture of the sound in its locations as well as the sense of dread and uncertainty that looms in the film. The film’s music by Mihaly Vig is a largely electronic score that definitely recalls the music of Russian composer Edvard Artimev in terms of its melancholia as it is truly mesmerizing in its dissonant yet ambient presentation while the soundtrack also includes some accordion music played on location.

The film’s remarkable cast includes some noteworthy performances from Alfred Jarai as the intellectual Halics, Erzsebet Gaal as Halics’ wife, Owen Calvert as the village fool, Andras Bodnar as Irimias and Petrina’s associate Sanyi, Janos Derzsi as the skeptical Kraner, Iren Szajki as Kraner’s wife, and Erika Bok as the young girl Estike. Peter Berling is superb as the ailing yet reclusive doctor who often observes everything from his house as he is troubled by his alcoholism and his poor health. Miklos Szekely B. is terrific as Futaki who conspires with Schmidt into collecting money to do something only to be stopped by Irimias as Futaki also tries to hide his secret affair with Schmidt’s wife. Laszlo Lugossy is fantastic as Schmidt as a farmer who is trying to gather money so he can start on his own unaware of what to do and what Irimias is planning.

Eva Almassy Albert is amazing as Schmidt’s wife who tries to hide her affair while comprehending everything that is happening as she is the most reluctant to trust Irimias though she doesn’t speak out about it. Putyi Horvath is excellent as Irimias’ partner-in-crime Petrina who questions what Irimias is doing while getting things done for Irimias. Finally, there’s Mihaly Vig in a phenomenal performance as Irimias as this man of great charisma and power who seems like a reincarnation of Satan himself as he tries to sway the residents into giving him money so he can rebuild their community while being very cagey about his intentions.

Satantango is an incredible film from Bela Tarr. Armed with gorgeous visuals and an ambitious presentation that defies the concept of what cinema could be, it’s a film that is very challenging but also engrossing in its exploration into the fall of Communism in Eastern Europe. While it is definitely not a film for everyone due to its slow pacing and very minimalist approach to storytelling. It is a film with a very bold take on a story of a world that is changing in a place that is very removed from that world. In the end, Satantango is a tremendously evocative film from Bela Tarr.

I'm impressed you managed to finish "Satantango", I don't know if I would have the patience.
The only Bela Tarr film I completed was "Werckmeister Harmonies", which I liked.
"The Turin Horse" frustrated me with the slow-pacing and lack of plot, although as with most of his work, it had tremendous atmosphere and sense of place.

You are right this film doesn't seem like everyone's cup of tea. I don't normally have the patience to watch something like this, but it seems worth a watch for those who do.

@Chris-Though this was my first Bela Tarr film, I'm not going to see any of his other films any time soon though I did enjoy this though its pacing was extremely slow.

@ruth-This film took more of a week for me to finish as it was hard and I don't recommend it to anyone who doesn't have that kind of patience but it is still a grand piece of art that should be sought out.