Originally Written and Posted at Epinions.com on 2/4/08 w/ Additional Edits. 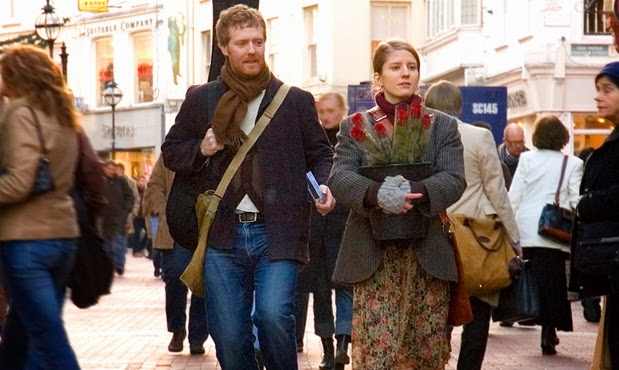 Written and directed by John Carney, Once is the story of a a street musician who meets a young piano player as they make music together. The film is an exploration into the power of music and how two people bond through the world of creativity. Starring Glen Hansard and Marketa Irglova. Once is an enchanting film from John Carney.

A street musician (Glen Hansard) is singing in the city of Dublin as he does for most of the day where he sings covers. Whenever he is not working for his father (Bill Hodnett) fixing vacuum cleaners, the musician plays in the streets where at night, he sings original songs about heartbreak following a break-up with his longtime girlfriend (Marcella Plunkett). One of those people who pays attention to his songs at night is a Czech-immigrant pianist (Marketa Irglova) who sells flowers in the street by day. The two strike up a conversation about music as the young woman ask the man about his songs. When she learns that he fix vacuums, the budding friendship continues. Then one day while bringing her broken vacuum, she takes him to a music shop where they realize they have chemistry as they perform one of his original songs.

After inviting her to his home, he asks if she can stay the night but she politely refuses until he apologized the next day. He is invited into her home where she lives with Czech mother (Danuse Ktrestova) and a baby daughter (Kate Haugh) as he gives her a CD with an instrumental demo. She asks if she can borrow to write lyrics for a song while he begins to write a new song while watching a video of his ex-girlfriend. Realizing the two have a gift for making songs together, they get a loan to record demos with help from local musicians (Gerard Hendrick, Alistair Foley, and Hugh Walsh) in the recording sessions. While the studio's engineer Eamon (Geoff Minogue) wasn't interested at first, it was until the songs he hears is when he helps them. Yet, as the musician and pianist start to get closer, they realize that forces beyond them are pulling them apart despite their musical chemistry.

Since the revival of the musical genre beginning with Baz Luhrman's Moulin Rouge, the genre has been known for lavish productions and musical cues that feature choreography and such. While those conventions in the genre do well, writer/director John Carney took a more unconventional approach to the genre by telling a story but without having to make a scene made where a song is about to performed. Instead, there's an improvisational feel that gives the performances a natural feel as if they're sung on location. Plus, the songs that Glen Hansard and Marketa Irglova create explore the emotions that the characters are going through in their everyday life.

The music which is mostly performed by piano and guitar works in that improvisational, raw feel as the songs that are performed lets the story flow easily. While there's not much of a plot, it's through the music and Carney's intimate direction that really carries the film. Carney uses the location of Dublin and parts of Ireland as a wonderful backdrop for the film's characters while his approach to the relationship of the musician and pianist is more of a collaborative relationship that could've been romantic. Instead, that relationship is told from a subtle approach where if it had gone further, it would've been like any other romantic film. With the use of hand-held cameras for most of the film, Carney definitely goes for a bit of realism in capturing this budding relationship while making it intimate without some grand production or huge dramatic moment. Instead, Carney's solid direction flows smoothly for the entire film for an engaging and touching film.

Cinematographer Tim Fleming does wonderful work on the film's interior lighting designs through hand-held, digital camera as it captures the sense of intimacy and realism of the locations. The exterior shots have a somewhat-grainy look on some of the shots of the city but beaches and shots of the sea are gorgeous to look at. Editor Paul Mullen does an excellent job in the editing without using the typical, Hollywood, fast-cut approach for a leisurely, well-paced style. Production designer Tamara Conboy does an excellent job with the interiors in the look of the home-like worlds of the musician and pianist while costume designer Tiziana Corvisieri also brought that realism in the clothing with its casual-style clothing on its leads. Sound mixer Robert Flanagan does a great job in capturing the atmosphere in the film's locations but most notably in the singing and performances of the film's leads.

The casting by Maureen Hughes is superb with memorable small roles from Geoff Minogue as an engineer, Gerard Hendrick, Alistair Foley, and Hugh Walsh as street musicians who help in the recording sessions, Kate Haugh as the pianist's baby, Danuse Ktrestova as the pianist's mother, Marcella Plunkett as the musician's ex-girlfriend, and Bill Hodnett as the musician's father. Yet, the film's best performances, not surprisingly, is the duo of Glen Hansard and Marketa Irglova. Hansard as the haggard, heartbroken, lonely street musician and Irglova as the curious, feisty pianist are a great pair to watch as the two have amazing chemistry in both their dramatic performances as well as their musical performances. Playing songs they wrote themselves including a couple of Van Morrison covers and a song by Interference, it's the way they played the songs and their chemistry that is more striking. It's an overall enjoyable experience to watch the two actor-musicians play these great songs.

Once is a truly magical and heartwarming film from John Carney that includes the amazing talents of Glen Hansard and Marketa Irglova. The film is truly one of the finest stories about music as well as breaking the conventions of what a musical can be. In the end, Once is a phenomenal film from John Carney.

Lovely review! I'm a big fan of Once, its so raw and honest.

Cool. I'm glad you enjoyed it too.

I've been hearing so many great things about this one. Interesting you mentioned Moulin Rouge, this one seems like the opposite in that it's far more understated and perhaps more emotionally-restrained. Curious to check this out at some point.

@ruth-It's a very different film than Moulin Rouge! yet they use the music to tell the story so effectively.

I saw Once by chance during some previews in the summer before it came out, and Hansard and Irglova did an acoustic performance after the movie. Carney was also there to answer questions. I loved it, and it's one of my favorite movies.

I've also grown to love Hansard's music, especially his work with The Frames. If you like the music in this film and haven't heard them, you should definitely check it out. There's also a pretty amazing concert film by The Frames plus an intriguing documentary on Hansard and Irglova called The Swell Season.

@Dan Heaton-I have the soundtrack and I certainly love it but I haven't really caught up with them though I know that they have broken up and made a documentary about themselves.

I love this one! I'm so thankful they played at the Oscars that year. That's where I first heard of this. (and I shamelessly wish Hansard and Irglova would've stayed together in real life. They were such a cute couple)

@Brittani-Yeah, I wish they're still together as I did love them at the Oscars and Jon Stewart allowing Irglova to finish her speech.