Originally Written and Posted at Epinions.com on 2/10/07 w/ Additional Edits. 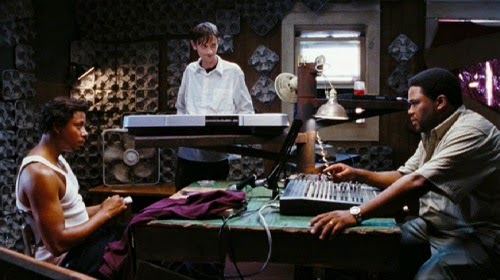 Written and directed by Craig Brewer, Hustle & Flow tells the story of a pimp from Memphis decides to become a rapper hoping to find a better life for himself. A film about starting over and redemption, Brewer explores the world of Memphis hip-hop as well as the culture that surrounds it. Starring Terrence Howard, Taryn Manning, Anthony Anderson, Taraji P. Henson, D.J. Qualls, Paula Jai Parker, Elise Neal, Isaac Hayes, and rapper Chris "Ludacris" Bridges. Hustle & Flow is a superb film of music and redemption from Craig Brewer.

Hustling through the streets of Memphis as a pimp, Djay (Terrence Howard) is still trying to make ends meet. Though being a pimp has brought him a bit of power and money, it only covers barely of what he is doing where he still lives in the ghettos of Memphis with a couple of prostitutes, Nola (Taryn Manning) and Shug (Taraji P. Henson) who is pregnant. Helping to make money as well is Lexus (Paula Jai Parker), but is often ungrateful towards him. While Djay is still a down-home boy to the locals, including bartender Arnel (Isaac Hayes), he ponders life without having to be a pimp. Even when he learns that a rapper he knew years ago named Skinny Black (Ludacris) has now made it big. After getting a little keyboard from a customer for cheap, Djay starts to become obsessed with music.

Running into an old school friend named Key (Anthony Anderson), he learns that Key is a recording producer who often produces church music to make a decent living. Djay realizes that Key is the chance he needs where he goes to his house and plays him a demo he made from the little keyboard as Key decides to be involved. Though Key's wife Yvette isn't sure about this, she understands it's a break from the monotonous job he’s doing. With help from a white musician named Shelby (D.J. Qualls), Key and Shelby create beats while Djay begins to flow whatever comes out of his mouth. Though Lexus didn't thing Djay's new thing would happen, Shug and Nola are intrigued. Eventually, Djay begins to evolve more despite some creative tension that’s settled by Shug. Shug's presence helped things where she created a hook for a song they've been working on and it becomes great although Key realizes they need better equipment to make it sound better.

Djay does some hustling with Nola to get a new microphone but Nola feels useless and frustrated with her role. Djay tells her that if they make it, Nola will become someone more important. With a new microphone, things start flowing as Djay's demo is nearly completed. Learning that Arlen is going to throw a private party that Skinny Black will be attending, Djay feels it's his chance to get that demo sent to Black. Arriving at the party with a new look and a gold chain, Djay hopes to make a chance thinking there's some history between him and black. Yet with the reality and Black's crass behavior, Djay wonders how far will it take for his dreams to come true.

The theme of redemption is a big engine that drives the plot of this film where it revels in its realism but also offers hope to audience. Writer/director Craig Brewer understands what it takes to make it into the music business in all of its harshness. Yet, it's really more about a man who makes a living dealing drugs and pimping hookers trying to see if there’s something more. Sure, Djay isn't a nice guys at times, making women vulnerable or being abusive towards them. Still, he tries to make something of himself and find some support from the people that surrounds him. Even if they’re dysfunctional, which is common in the South. Plus, Brewer's vision of a pimp reveals that not all of them wear suits or look intimidating and aren't always abusive towards their women. There's a complexity to the character of Djay while the support he has are characters that audiences can relate to. It's in Brewer's script and gritty, observant direction that really holds true.

Even in the environment of somewhere like Memphis, it really presents of what it's really like in the ghettos. There’s moments where it's crazy and it can be peaceful at times. Brewer shows both sides while he explores the world of music where in Memphis, it's very diverse. There's hip-hop, country, blues, and soul in this melting pot called Memphis and in parts of the film, there's a conversation of Southern hip-hop in relations to the blues and it makes perfect sense. Even in what D.J. Qualls character says that there's really a lot of similarities to a song like Backdoor Man to Back That Ass Up. While it may be a debate about the purity of Southern hip-hop among its fans and purists, it can't be denied of where it roots come from. Brewer understands that immediately and hip-hop is true definition of where that culture comes from. Even to the film’s plot where the music carries it to bring some excitement and entertainment to its audience.

Cinematographer Amy Vincent does excellent work in capturing the look of Memphis with it gritty, colorful camera work where it's not all bright or flashy. It's very real as is the art direction from production designer Keith Brian Burns and art director Alexa Marino. The look of the film from the dark bars, the streets, and the home of Djay where cup holder trays are used as sound proof walls are a fantastic touch to the film's authenticity. Costume designer Paul Simmons adds to that grittiness with these leather, short skirts that Nola wears or the kind of dirty, torn clothes that everyone else with the clean-like look that Key and Yvette wears. Editor Billy Fox does excellent work in the film's editing including a sequence with a lot of jump-cuts that involved Djay's supposed association with Skinny Black. Sound editors Greg Hedgepath and Frank Smathers with sound designer Brian W. Jennings do excellent work in capturing that atmosphere of recording and the world known as the South with train horns blaring and cars which speaks true to its environment.

Then there's the music that is a big part of the movie. Score composer Scott Bomar adds a moody, rhythmic texture to the score that adds the sense of tension and melancholia of where the film is. The rest of the film's soundtrack is dominated by touches of country music, blues, and soul music courtesy of the likes of Al Green and Buddy Guy. Then there's the hip-hop which features tracks written by Al Kapone, Lil' Jon, and Three-6 Mafia. The stuff that is performed by Terrence Howard like Whoop That Trick and the Oscar-winning It's Hard Out Here For A Pimp are catchy and memorable. The music is definitely inspiring and will make any audience go “Aww yeah!!!”

Then we have the film's cast that includes notable small performances from Josey Scott of Saliva as a store clerk, members of Three-6 Mafia as locals, and the legendary Isaac Hayes as the sympathetic bartender Arlen. Elise Neal is good as Key's supportive wife who doesn’t understand the ghetto world and believes to be neglected only to realize what's going on. Paula Jai Parker is pretty good as the combative, ungrateful Lexus who serves as an antagonist for Howard. Anthony Anderson and D.J. Qualls, both of whom are known for their comedic talents, give excellent performances that show more of their range in drama. Anderson as the more moralistic, cautious Key and Qualls as the more experimental, pot-smoking Shelby are two excellent, memorable characters that show the good and the bad of creativity.

Established rapper Ludacris gives a fine performance as the crass, egomaniac Skinny Black who seems friendly though he seems to be distracted by his own fame. Ludacris, who also appeared in Paul Haggis' Crash with Terrence Howard, proves that he can be a solid actor. Even in this performance of a rapper who seems to have betrayed his roots. Taryn Manning is wonderful as Nola, Djay's top earning hooker who is trying to find her footing as her character develops from a naive hooker to a woman who finds her own footing. Taraji P. Henson is great as the pregnant, supportive Shug whose vulnerability in her usefulness proves to have power when she sings. Henson shows a lot of development as someone insecure to someone who feels empowered when she sings.

Finally, there's Terrence Howard in what is truly an amazing role of not just 2005 but one of the best of the decade. Howard's complex, realistic, and engaging performance is truly inspiring to watch as a man who goes into this mid-life crisis and then, finds hope. Howard brings in all of the struggles, swagger, frustration, and warmth to a character that could've been sleazy since he is a pimp/drug dealer. Howard manages to find the humanity in the character to the point that he is relatable. When he's rapping and doing music, there is such joy in the performance that it looks like he's having a lot of fun. It's a fantastic performance from the talented Terrence Howard.

I love Hustle & Flow. Terrence Howard was nothing short of amazing, here. And talk about a gritty piece of film. Wow. Great review.

You liked this way more than I did, I didn't care for it at all. And Terrance Howard is such a douchebag in interviews, I think that kind of ruined it even more for me.

@Wendell Ottley-Coming from the South, I was able to be engaged by this film and enjoyed the hell out of it.

@Brittani-I like Howard as an actor though I have no clue on what he's like outside of acting as I heard that is why he got re-cast in the Iron Man films.

@Alex Withrow-Thank you. I totally adored that film and made me proud to be from the South. And I still love that moment when Three-6 Mafia won the Oscars.