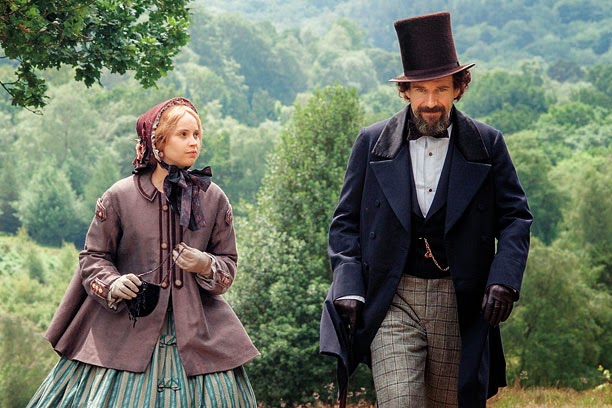 Based on the book by Claire Tomalin, The Invisible Woman is the story of Charles Dickens’ affair with a younger woman that lasted several years before Dickens’ death. Directed by Ralph Fiennes and screenplay by Abi Morgan, the film is an exploration into the secret affair that Dickens would have with a stage actress in Nelly Ternan as she is played by Felicity Jones with Fiennes starring as Dickens. Also starring Kristin Scott Thomas, Joanna Scanlan, and Tom Hollander. The Invisible Woman is a mesmerizing though flawed film from Ralph Fiennes.

The life of Charles Dickens is a compelling one as the film is about his affair with the stage actress Ellen “Nelly” Ternan as she was 18-years old when the two first met during a stage performance of one of his plays. Yet, the story is told from Nelly’s perspective as she thinks about the time she met Dickens and their eventual affair that would last for several years until his death in 1870. While Abi Morgan’s screenplay does have a unique approach to the narrative as it is told largely from Nelly’s perspective. The script is one of the key faults of the film where there’s parts of the film that is told from Dickens’ perspective in the way his marriage is dissolved as well as certain parts of his affair with Ternan is sort of glossed over. Especially as the first two acts is about the building of Dickens’ relationship with Ternan that starts out as friends that would destroy Dickens’ marriage. Once the affair starts to happen, it occurs in the third act where there is no sense of when the affair happens other than a few key moments that would shape their secretive relationship.

Ralph Fiennes’ direction is quite simple and understated as he does play true to the period setting of the mid-to-late 19th Century in Britain as the story spans nearly 30 years. Fiennes does maintain some unique compositions in the wide-medium shots as well as some unique close-ups and framing devices to play into this affair between Dickens and Ternan. Though he is hampered by some of the film’s issues with the script as it relates to the back-and-forth narrative of Nelly recalling her affair with Dickens. Much of the film is shot in parts of Kent and London as well as the British countryside to play into that feel of the period as well as some scenes on a beach where Nelly does much of her walking as she reflects on that crucial part of her life that she is reluctant to share with anyone in her life after Dickens. Overall, Fiennes creates an engaging but uneven film about Charles Dickens’ secret affair with Nelly Ternan.

Cinematographer Rob Hardy does excellent work with the film‘s very lush and evocative cinematography for some of the gorgeous interior lighting schemes as well as some scenes set in the exterior locations. Editor Nicolas Gaster does nice work with the editing as it‘s mostly straightforward with few stylish touches including a key scene involving a train in the film‘s third act. Production designer Maria Djurkovic, with set decorator Tatiana Macdonald and supervising art director Nick Dent, does amazing work with the look of the homes that the characters live in as well as the stage plays that Dickens would stage.

Costume designer Michael O’Connor does brilliant work with the costumes from the design of the dresses and gowns the women wear as well as the suits and hats that Dickens would wear. Hair/makeup designer Jenny Shircore does fantastic work with the look of the hairstyle the women wear as well as the beard and hair of Dickens. Sound editor Matthew Collinge does superb work with the sound from the way some of the location sounds come into play as well as the sound of the stage plays. The film’s music by Ilan Eshkeri is wonderful for its orchestral score with some lush, somber pieces to some more ominous and dramatic pieces to play into Nelly’s reflection of her past.

The casting by Leo Davis is incredible as it features some notable small roles Amanda Hale and Perdita Weeks as Nelly’s older sisters, respectively, in Fanny and Maria, Tom Burke as Nelly’s husband George in the 1883 scenes, and Michael Marcus’ as Dickens’ eldest son Charley. Michelle Fairley is terrific as Wilkie Collins’ mistress Caroline Graves who would reveal the ideas of a secret affair while Joanna Scanlan is fantastic as Dickens’ wife Catherine who is aware that something is going on as she is this woman of radiance who would warn Nelly about what might be at stake in an affair that hasn’t happened yet. John Kavanagh is excellent as Reverend Benham who is intrigued about Nelly’s knowledge of Dickens’ work where he would ask questions about her life with Dickens.

Tom Hollander is superb as Dickens’ collaborator Wilkie Collins who would write some of the stage plays with Dickens while informing Nelly about what to do with her possible affair with Dickens. Kristin Scott Thomas is amazing as Nelly’s mother who is anxious about Dickens’ attraction toward her daughter as well as some revelations about Nelly’s talents as an actress. Ralph Fiennes is brilliant as Charles Dickens as a man who is quite playful but also very caring as he falls for Nelly as he treat her with great care while balancing his family life and public persona. Finally, there’s Felicity Jones in a phenomenal performance as Nelly Ternan as this young woman who is an admirer of Dickens’ work as she falls for him yet deals with the anguish over what could hurt his public persona as their affair would later haunt her following his death as it’s a very entrancing performance from Jones.

The Invisible Woman is a stellar film from Ralph Fiennes that features amazing performances from Fiennes and Felicity Jones. Despite some of the film’s issues with its screenplay over its narrative, it is still a worthwhile film that explores the life of Charles Dickens and some revelations about his work. In the end, The Invisible Woman is a pretty good film from Ralph Fiennes.

I've heard such awful things about this. I debate whether I want to bother, but you have me intrigued...

Oh man, I had the exact opposite reaction to this film than you did. I hated it. It's nice to see it from another perspective though!

@Fisti-It's actually a pretty good film though it is very flawed in terms of its narrative.

@Brittani-Well, I can see why you didn't like it as there were a few things about the film that I didn't like. I still thought it was pretty good as I do love Felicity Jones in this film.

Hi Steven! My friend Ashley gave me a review of this and she had the same thoughts in that it's engaging but uneven film. I still might give it a shot as I LOVE Fiennes & Scott Thomas. Felicity Jones is quite good in a couple of things I've seen her in, but both of the roles were quite similar so I'm curious how she fares in this one.

@ruth-She's really good in this as she was the highlight for me as she also had some very good chemistry with Fiennes despite some of the issues with the film's script.