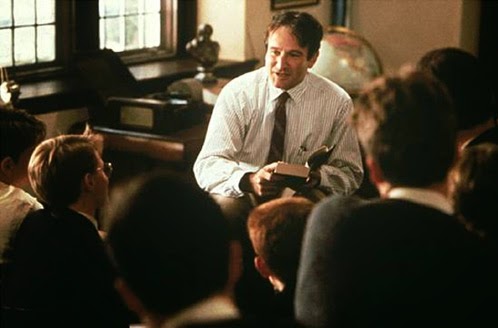 Directed by Peter Weir and written by Tom Schulman, Dead Poets Society is about a former prep school student who returns to his old prep school as a teacher to a new group of young students. Breaking away from the conservative world of the school, the teacher gives his young students a chance to find their own individuality through poetry as a couple of students get a chance to live their dreams while dealing with the conservative world of their school and the expectations from their parents. With Robin Williams in a leading performance as the English teacher John Keating, he is accompanied by a young cast that includes Robert Sean Leonard, Ethan Hawke, Josh Charles, Dylan Kussman, Allelon Ruggerio, Gale Hansen, and James Waterson, along with appearances from Norman Lloyd and Kurtwood Smith. Dead Poets Society is an inspiring yet majestic film from Peter Weir.

Set in a prep school in 1959 in the American Northeast, the film is a simple story where a new teacher arrives at the school to teach poetry and literature as he would bring new ideas to his young students that breaks away from the traditional ethics of the school. It’s a film that in some respects is about times that are changing where this school is trying to maintain these ideas of wisdom in tradition, honor, excellence, and disciple in a world that is starting to change as its new teacher is part of that new world. At the same time, it is about a group of students who are amazed by this new teacher and his ideas as they’re inspired to read poetry as some of these students have the desire to do something else rather than what is expected from them. Especially as a few would endure the pressures of their parents to uphold certain standards and ideas rather than pursue their own ambitions and desire.

Tom Schulman’s screenplay is very broad in the way it explores the life of a prep school in the late 1950s where a new year is about to begin for a group of students while a newcomer to the school is a shy aspiring writer in Todd Anderson (Ethan Hawke) whose older brother was a student at the school. Anderson’s roommate in Neil Perry (Robert Sean Leonard) is being pressured by his father to become a doctor as he would eventually become interested in acting. Anderson and Perry would eventually find inspiration through the teachings of John Keating who was a student at the school years ago as he traveled through Europe to become a teacher as he would teach his students new ideas about living life. Even as he discards the traditional ideas of poetry as he feels that everything he had been taught about is tired and irrelevant as he would allow students to find themselves and their passion where many of them would reform an old poetry that Keating was a part of called the Dead Poets Society.

The script doesn’t just explore a group of young men coming together to read poetry but also find something in themselves where Knox Overstreet (Josh Charles) would use poetry to woo a girl from a nearby public school while Charlie Dalton (Gale Hansen) would find individuality and challenge the school’s old school ethics. Though Keating’s intentions were noble, he isn’t interested in challenging anything but rather expand the ideas as it would get him into some trouble with the school’s headmaster Gale Nolan (Norman Lloyd) who is trying to ensure the school’s ethics refusing to believe that times are changing. Especially where Perry’s desires to become an actor starts to get the attention of his father (Kurtwood Smith) as it would play into events that would effect the film tonally as well as the decisions some of the characters would make.

Peter Weir’s direction is very mesmerizing in the way he portrays the world of late 1950s prep schools set in the American Northeast where it’s very posh and has this air of elegance that stood for the ethics that the school is about. Yet, everything outside of that school represents a world that is ever-changing where it is shot largely at the St. Andrew’s School in Middletown, Delaware which definitely feels like the perfect setting of a world that is long and gone. Weir’s direction is quite simple in terms of the many compositions he creates but has this air of richness in every image he creates as well as an energy that plays into this feeling of a new world emerging into this school by this very passionate and charming teacher. The direction also has Weir find elements of humor and exuberance to play into a world that is changing where Keating brings something that is very worldly in the art of poetry.

Through some unique close-ups and medium shots, Weir maintains that sense of intimacy inside the classroom but also something much looser outside of the classroom. Even as the students would find ways to express themselves such as Perry who would get a chance to do Shakespeare while Anderson would have this great scene where he would create a poem of his own in the classroom in a way that comes off very naturally. It’s among the key aspects in Weir’s direction that is compelling as it does become more dramatic in its third act where it plays into some of the fallback of Keating’s teachings and how the old world wants to instill its ideals against the new world. All of which is set in a classroom about poetry and one teacher who would get a group of students to feel inspired for the world that is ahead of them. Overall, Weir crafts a very touching and riveting film about a teacher and the students who inspired him.

Cinematographer John Seale does amazing work with the film‘s rich and colorful cinematography to play into the exterior settings from the fall and winter seasons as well as some of the low-key lighting schemes for some scenes set at night. Editor William M. Anderson does brilliant work with the editing with its unique approach to rhythmic cuts and other stylized cuts to capture the sense of energy in the film as well as some of the more haunting moments in the film. Production designer Wendy Stites, with set decorator John H. Anderson and art director Sandy Veneziano, does fantastic work with the look of the classrooms and dining halls as well as some of the places nearby the school. Sound editor Alan Splet does superb work with the sound from the sense of chaos that goes on in the school to some of the sparse sound textures in some of Keating‘s teachings. The film’s music by Maurice Jarre is tremendous for its very low-key yet somber score with some unique string arrangements and some soothing orchestral themes as it is one of the film’s highlights.

The casting by Howard Feuer is just excellent as it features some notable small roles from Alexandra Powers as Knox’s crush Chris Noel, Leon Pownall as the teacher McAllister, and Debra Mooney as Neil’s mother. Kurtwood Smith is terrific as Neil’s very strict father who wants him to become a doctor while Norman Lloyd is excellent as the school headmaster Gale Nolan who tries to maintain a sense of order and idea of tradition in the school. Allen Ruggiero is superb as the nerdy Meeks who becomes much looser through poetry while James Waterston is wonderful as the more awkward Pitts who finds some confidence through poetry. Gale Hansen is fantastic as Charlie Dalton who is the first to be amazed by Keating’s teachings as he finds individuality and the desire to make difference. Josh Charles is amazing as Knox Overstreet who would find confidence in poetry to woo a girl who comes from another school.

Dylan Kussman is brilliant as Richard Cameron as a student who is the most reluctant to follow Keating’s ideals as he would later look out for himself and think of what is best for the school. Ethan Hawke is phenomenal as Todd Anderson as this aspiring writer who is very shy and extremely insecure only to get a push and some encouragement through Keating as he would find his way towards happiness. Robert Sean Leonard is marvelous as Neil Perry as this young man who is trying to find himself as he falls in love with the world of acting as he struggles with his own desires and what his father wants from him. Finally, there’s Robin Williams in one of his most iconic performance as John Keating. It’s a performance that has Williams display humor and exuberance but also one that is very sensitive and nurturing as it displays many of what he can do as an actor and how inspiring he can be.

Dead Poets Society is a magnificent film from Peter Weir that features an exhilarating and passionate performance from Robin Williams. Armed with a great supporting cast that includes Ethan Hawke and Robert Sean Leonard as well as captivating themes on individuality and changing the world through art. It’s a film that goes beyond the ideas of inspiration as it is also a film in how one teacher can change the lives of a group of young kids. In the end, Dead Poets Society is an outstanding film from Peter Weir.

Great review. This is probably my favorite Robin Williams movie and one of his best performances.

Oh my, how could I forget this was done by Peter Weir? I saw some clips of this following Mr Williams' death and was moved by it once again. I LOVED this movie when I first saw it years ago, so poignant and memorable. John Keating is definitely a wonderful and well-written character. I also like Robert Sean Leonard here, too bad his career never took off.

@Wendell Ottley-Right now, this film along with Mrs. Doubtfire and The Fisher King are in a three-way tie for his best performance. I'm not sure which one is the best of those 3.

@ruth-Leonard is still working and maintains a decent career so he's fine. I think this is my favorite film by Peter Weir so far as he is a chameleon of sorts where he never makes the same film twice.