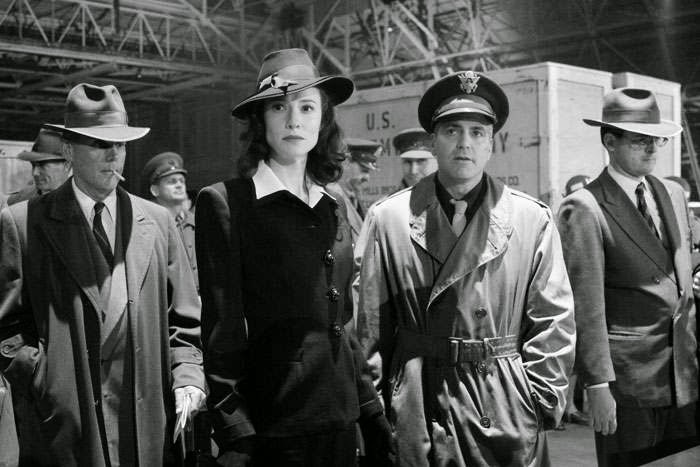 Based on the novel by Joseph Kanon, The Good German is a World War II film where an American officer investigates a murder following the Allies’ victory over Germany as he deals with a former lover and another American soldier as it involves various conspiracies. Directed, shot, and edited by Steven Soderbergh and screenplay by Paul Attanasio, the film is an ode to the film noir mysteries of the 1940s as well as films that explores the early years of postwar-Germany. Starring George Clooney, Cate Blanchett, Beau Bridges, Tony Curran, Leland Orser, Jack Thompson, and Tobey Maguire. The Good German is a compelling yet very stylized film from Steven Soderbergh.

The film is a homage to the world of film noir where it is set on the Potsdam Conference where an American war correspondent finds himself investigating a murder that has ties to some secret documents involving V-2 rockets as he would question a former lover whose husband might know about the manufacturing of those rockets. All of which involves mystery and intrigue as it plays to a man trying to do what is right unaware that his former lover is hiding secrets of her own as well as the whereabouts of her husband who is presumed dead. Adding to the complication is a young soldier the woman is involved with as he has no clue about what is happening as he starts to ask too many questions. All of which plays to the schematics and such that is typical of film noir.

Screenwriter Paul Attanasio does maintain that air of mystery that is prevalent in the film but when it comes to some of key aspects of the suspense. It never really gels as it often second-guesses itself where it loses some momentum in the story. While the lead character of Captain Jacob Geismer (George Clooney) and his former lover in Lena Brandt (Cate Blanchett) are interesting as they have a history together. The character of Lena’s young lover Tully (Tobey Maguire) is never really fleshed out as he is just a corporal in love with Lena and wants to help her get out of Germany but has no clue over what is really going on. Adding to the sense of intrigue is the fact that Lena’s husband Emil (Christian Oliver) knows something that would involve a manufacturer of V-2 rockets as the documents that Emil is hiding is something the Americans and Soviets want as they believe it is the future of war. All of which would have Geismer realize that there is something going on and he has no one to trust as does Lena who is already in hot water as she is targeted by the American government as well.

Steven Soderbergh’s direction is truly stylish not just in the visuals but also in the way he creates these compositions that is an absolute homage to film noir. Especially in some unique camera angles, close-ups, and medium shots to play into the look of the film though it shot entirely on a soundstage where Soderbergh even uses visual effects to create postwar Berlin. Serving as cinematographer in his Peter Andrews alias, Soderbergh would shoot the film in black-and-white as he would create shadows and interior lighting schemes that played to the style. Even as he would add bits of modern language such as swearing and sex into the film as he would also serve as editor, in his Mary Ann Bernard alias, as he infuses the film with lots of editing styles from dissolves, transition wipes, and other unique cuts as well as stock footage. All of which add to the sense of intrigue though Soderbergh is unable to really amp up some of the film’s suspenseful moments because of the script. Even though he does maintain that sense of thrill in a key aspect of the film’s climax yet it sort of ends on a downer of sorts as it really plays to the idea of compromise. Overall, Soderbergh creates a worthwhile yet flawed film about an American officer trying to help a German woman in postwar-Germany.

Production designer Philip Messina, with set decorator Kristen Toscano Messina and art director Doug J. Meerdink, does excellent work with design of some of the interior buildings such as the military offices and some of the ruined buildings to play into the feel of postwar Germany. Costume designer Louise Frogley does fantastic work with the period costumes in the look of the dresses that Lena wears as well as the different military uniforms the Americans and Soviets wore. Visual effects supervisor Thomas J. Smith does nice work with some of the minimal visual effects which are essentially backdrops for some scene set in Berlin and in Potsdam. Sound editor Larry Blake does superb work with the film‘s sound in the way the club that many of the characters go to as well as some of the sounds of gunfire in some scenes. The film’s music by Thomas Newman is brilliant for its orchestral score that has a lot of string flourishes that plays into the film’s mystery and suspense.

The casting by Debra Zane is amazing as it features some notable small roles from Robin Weigert as a German hooker named Hannelore, Dave Power as a corrupt lieutenant, Tony Curran as the cautious club bartender Danny, Beau Bridges as the very ambiguous Colonel Muller, Leland Orser as a well-meaning yet nosy investigator in Captain Teitel, Ravil Isyanov as secretive Soviet official that Tully would do business with, Jack Thompson as a congressman who would watch over the Potsdam conference, and Christian Oliver in a terrific role as Lena’s husband Emil who carries important secrets that might save Germany and the world. Tobey Maguire is alright as Tully as this very corrupt soldier who is just trying to make money as well as get Lena out of Berlin where Maguire has moments where he’s tough but it’s a role that is badly written at times where Maguire never rises above the material.

Finally, there’s Cate Blanchett and George Clooney in superb performances in their respective roles as Lena Brandt and Captain Jake Geismer. Blanchett brings an air of radiance to her role as well as something dark as she is a woman carrying some big secrets while juggling her feelings for Geismer and he relationship with Tully. Clooney has this very calm yet determined persona as a man who wants to do things right as he comes to terms with his feelings for Lena and his duty. Blanchett and Clooney do have some chemistry together despite some of the flaws in the script as they do bring in a sense of old-school acting into their performances that is right for the film’s tone.

The Good German is a pretty good film from Steven Soderbergh that features stellar performances from George Clooney and Cate Blanchett. While it is a flawed film that tries to recreate an old language of film, it is still a worthy homage to film noir. Especially as Soderbergh would infuse his own ideas to make it feel modern but also play tribute to the past. In the end, The Good German is a superb film from Steven Soderbergh.

I agree that the visuals are amazing, and Soderbergh does a great job recreating the feel of a '40s film. I also think Clooney and Blanchett are well-cast and the right people for this environment. On the other hand, I was not a big fan of this movie. It felt more like an exercise than a total film.

Great review! I completely forgot this movie existed to be honest. I never did get around to seeing it.

@Dan Heaton-It's so far one of my least favorite Soderbergh films where it wasn't suspenseful enough and I had a few issues with Tobey Maguire's performance and I think it borrowed too much from Casablanca and The Third Man.

@Brittani-It is kind of a forgettable film from Soderbergh but it has some good moments where I would give it a recommendation of sorts if you're into Soderbergh.

I liked the look of this film and remember watching this after seeing The Big Sleep and was impressed how well it matched the visuals but the story couldnt keep my interest. Blanchet and Clooney were good in this. Maguire was a bit out of his league. Good review

@The Vern-Maguire was very miscast as I didn't buy him as some young soldier who was quite threatening at times.