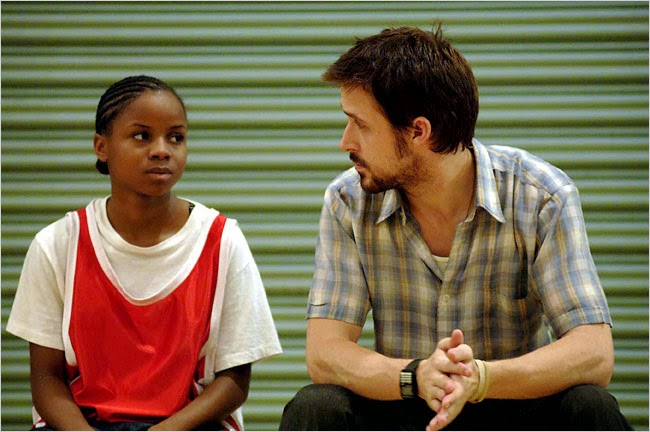 Directed by Ryan Fleck and written by Fleck and Anna Boden, Half Nelson tells the story of a young school teacher in the inner city who forms a friendship with one of his students who has discovered his drug addiction. Taking another relationship drama to a different level, it's a film that explores a young man's chance to try to save a young girl while dealing with his own demons. Starring Ryan Gosling, Anthony Mackie, Karen Chilton, Jay O. Sanders, and Shareeka Epps. Half Nelson is a haunting yet mesmerizing film from Ryan Fleck.

By day, Daniel Dunne (Ryan Gosling) is a young, middle school history teacher in an inner-city school where he's also the girls' basketball coach. Dunne's unorthodox yet edgy approaching to teaching history has won him over the praise of his students. Dunne's approach into teaching them history by having something they can relate to hasn't fared well with the school's principal despite the fact that it's worked. While his girl's team aren’t the best players, he does try and give them encouragement to get better. After school, Dunne goes to bars flirting with women and continuing on his troubling addiction to drugs such as cocaine and crack. Already, his life becomes out of control when he is caught in a bathroom dazed by one of his students named Drey (Shareeka Epps).

Drey is a young 13-year old student who lives at home while her mother Karen (Karen Chilton) works late as an EMT barely making by. The only help Drey gets in making money is through a drug dealer named Frank (Anthony Mackie) who owes her a favor after her brother Mike (Collins Pennie) is in juvenile hall. Dunne suddenly learns that his ex-girlfriend Rachel (Tina Holmes) is getting married while he starts to feel lonely and finds a kindred spirit in Drey. Drey knows his secret and keeps it that way while he takes her home since her father doesn't pick her up. Dunne is amazed by Drey's strength though she admits that her mother not being home all the time has made it tough. Dunne meanwhile, still revels into his own world of drugs as he is forced to face his own demons.

One day when taking Drey home, he takes her to his apartment where they have conversations about his work and his unconventional teaching approach. Helping him make dinner for a date with another teacher named Isabel (Monique Curnen), Drey is amazed at the kind of person Dunne is despite his troubles. While the weekend turned out to be good for Dunn and Drey in their own separate worlds, Dunne's demons get the best of him as he is troubled by a lot of things. The drugs and his weariness begin to affect his teaching and he starts to alienate everyone. When he sees Frank with Drey, Dunne decides to confront him about what he's doing to her. Unfortunately, Dunne's efforts is only troubled when his addiction worsens. During a night with his parents (Jay O. Sanders and Deborah Rush), his brother (Denis O'Hare) and his brother's girlfriend Cindy (Nicole Vicius), Dunne is forced to see his downward spiral while pondering Drey's own future.

While the film doesn't say anything new about drugs or addiction, the story of a young teacher trying to help a young girl escape into her own environment is a compelling one. Ryan Fleck and co-writer Anna Boden create a story that is gritty and very mesmerizing into how a man seeks redemption through a young girl while dealing with his demons. The film's story is simple enough though it's told in two different perspectives in both Daniel Dunne and Drey. While Dunne's world is often filled with a repetitive outlook of going to school on the day and party and do drugs at night. He makes a break for it in trying to help Drey. Drey's own world is just as tough since her mother isn't around much while the only adult that watches out for her is Frank. Though Frank isn't a total villain of sorts, he does watch out for Drey though his own intentions aren't what's best for her. The script is very drawn out by character while Fleck's subtle, observant, and very raw directing style works in conveying the atmosphere and drama that surrounds the situations and moments in the film. Overall, it's a very strong effort from Fleck.

Cinematographer Andrij Parekh is wonderfully exquisite in its realism while many of the exterior shots are haunting and almost dreamlike to convey the spiraling emotions of Dunn. Anna Boden's editing is also excellent for its straightforward manner and non-stylized cuts to draw the sense of emotion and intensity of the performances from the actors. Production designer Beth Mickle and art director Inbal Weinberg do fine work in taking the location of Brooklyn to reveal the location's gritty look but also a realistic feel to the apartment of Drey to the dilapidated look of Dunne's apartment. Costume designer Erin Benach adds to the grittiness with shabby shirts and ties that Dunne wears to the street clothes that the kids wear as well. Sound editor John Moros also adds to the tense atmosphere of the film to the alarm clock that Dunne wakes up on to the basketballs bouncing on the gym. The film's music features cuts from the Marshall Tucker Band, Lisa Vaughn and a few hip-hop artists while the rest of the music features a haunting score from the band Broken Social Scene filled with atmospheric, melodic guitar tracks.

The film's cast is wonderfully assembled with some memorable small performances from veteran actors Jay O. Sanders and Deborah Rush as Dan's parents, Denis O'’Hare as his brother, and Nicole Vicius in a funny scene as his brother's girlfriend. Other noted small roles from Collins Pennie, Monique Curnen, and Bryce Silver as fellow teacher Bernard plus a group of young actors like Tristan Wilds, Stephanie Bast, and Nathan Corbett as the students are equally memorable. Tina Holmes is excellent as Dan's ex-girlfriend Rachel while Karen Chilton is wonderful as Dre's hard-working, caring mother. Anthony Mackie gives a chilling yet superb performance as the small-time drug dealer Frank. Mackie brings a charm and danger to his role where he can be caring and do good things yet he runs a business and is doing some bad things so there's a complexity to Mackie's character and the performance is wonderfully balanced. Shareeka Epps is wonderfully amazing as the tough but confused Drey who has an understanding of what the adults around her are doing. Epps brings a strength and fragility that is haunting to watch as this young woman truly gives one of 2006's great performances.

Finally, there's Ryan Gosling in what has to be the performance of his career. Gosling has been known to display charm, a wit, and eccentricity. In this film, he strips it all down to bring a raw, restrained performance as Daniel Dunne. Gosling's sense of minimalism and observance shows the troubles of a man spiraling out of control while in the moment he acts charming only show a fragility to him that is underneath it. There's moments in the performance where his eyes does the acting for him and it's real proof that Gosling is the real thing. There's a lot of sadness and desperation in those eyes while the scenes he has with Epps feel real in how he tries to redeem himself. In roles where he played trouble youths and charming young men, Ryan Gosling proves himself to be one of the most brilliant actors of his generation.

I love this movie.Ryan Gosling gives a flat out amazing performance. The relationship between he and the young girl is both touching and heart breaking. Great review.

It's definitely a great film and certainly needs to be seen more into why Ryan Gosling is fucking awesome.

Great review. Love this movie... and it does contain Gosling's best performance. Such a layered and nuanced role. And yeah, Mackie is so cool and dangerous in this flick, you never know what he's going to do.

@Alex Withrow-Mackie I think was very underrated in his performance as he had that sense of danger that isn't seen very often. I liked that he got to go toe-to-toe with Gosling and the two became better actors after this film.