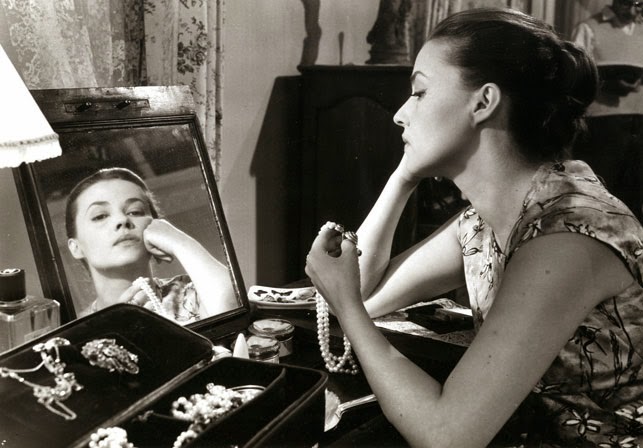 Based on the novel Point de Lendemain by Dominique Vivant, Les Amants (The Lovers) is the story of a woman who embarks on an extramarital affair as she rediscovers the joys of love. Directed by Louis Malle and screenplay by Malle and Louise de Vilmorin, the film is an exploration into the world of adultery as well as a woman trying to find fulfillment in her unhappy marriage as well as an affair with a polo player that also goes nowhere. Starring Jeanne Moreau, Jean-Marc Bory, and Alain Cuny. Les Amants is a ravishing yet provocative film from Louis Malle.

The film revolves around the life of a rich woman whose husband is a newspaper owner as she spends time with her childhood friend in Paris where she embarks on an affair with a top polo player that eventually doesn’t go anywhere. It’s a film that explores a woman’s unhappy life as it plays into her attempts to find happiness in a world where she is surrounded by the finer things in life. While Jeanne Tournier (Jeanne Moreau) may have everything a woman wants as well as a daughter Catherine (Patricia Maurin), she isn’t happy as she barely sees her husband Henri (Alain Cuny) where she would have this other life in Paris with her friend Maggy (Judith Magre) and this suave polo player named Raoul (Jose Luis de Vilallonga) whom Jeanne would have an affair with. It all plays into events that happen in the film’s first half as it is partially told by this unseen narrator who comments on Jeanne’s misery and sense of uncertainty. The film’s first half definitely plays into Jeanne’s own sense of unhappiness and her attempts to find happiness with Raoul that is eventually fleeting due to the fact that he’s quite full of himself.

It is these moments where Jeanne begins to realize the façade of her lifestyle as even Maggy becomes more pretentious as the story progresses. The film’s second half revolves around this dinner party that Jeanne is hosting where Henri would meet Maggy and Raoul but it also this key moment where Jeanne would see more of her unhappiness and the emptiness in her lifestyle. All because of a simple moment where her car breaks down as she would meet this archeologist named Bernard (Jean-Marc Bory) who comes from a rich family but lives a very simple, no-nonsense life as he is poetic as well as know what people wants. He would be invited to the dinner as he acts more as an observer rather than an equal as it plays into Jeanne’s awareness of her empty life. All of which would lead to her trying to make sense of everything and find an idea of what true love is.

Louis Malle’s direction is quite simple in terms of compositions and how he frames his actors into a scene. Yet, it does remain very engaging as it plays into the life of this woman as it is largely set in the French countryside with locations nearby Paris. Malle’s use of dolly-tracking shots in the dinner scene is quite interesting to play into how Bernard and Jeanne are observing the behaviors with Jeanne being very silent for almost the entirety of the scene. Many of the compositions has Malle going for a lot of medium shots and a few wide shots for scenes involving multiple characters while maintaining something intimate as it relates to Jeanne’s desire for love. While there’s definitely some very lively scenes such as Jeanne, Maggy, and Raoul going to a carnival and some scenes shot in the car. It plays into Jeanne’s own growing detachment from her surroundings where the film’s third act has her not only discovering about true love but also what it can bring. It would feature not just bits of nudity but also something was quite shocking at the time which led to a landmark obscenity case in the early 1960s by the American Supreme Court. Overall, Malle creates a very compelling yet evocative film about a woman trying to find herself and love through an extramarital affair.

Cinematographer Henri Dacae does brilliant work with the film‘s black-and-white photography from the look of the carnival lights and some of the interiors to the gorgeous sequence where Jeanne embarks on a personal journey during the moonlight in the garden as it features some beautiful lighting schemes. Editor Leonide Azar does nice work with the editing as it‘s quite straightforward with a few rhythmic cuts to play into some of the dramatic tension. Production designer Bernard Evein and set decorator Jacques Slaunier do superb work with the look of Jeanne‘s home estate as well as the Parisian apartment that Maggy lives in. The sound work of Pierre-Andre Bertrand is amazing for the layers of sounds in some of the polo game scenes as well as the sparse sound textures in the scenes set in the wood where Jeanne walks around at night. The film’s music largely consists of pieces by Johannes Brahms that plays into not just some of the film‘s melancholia but also into some of the romantic elements of the film.

The film’s phenomenal cast include some notable small roles from Patricia Maurin as Jeanne and Henri’s daughter Catherine, Michele Giradon as Henri’s secretary, Georgette Lobre as Jeanne’s maid, and Gaston Modot as Jeanne and Henri’s butler/cook Coudray. Jose Luis de Vilallonga is terrific as the suave and handsome Raoul as a polo player who has been all over the world as he gives Jeanne a lot but never really the time to make her feel special as he’s essentially full of himself. Judith Magre is excellent as Maggy as Jeanne’s childhood friend who enjoys the rich life as she is often carrying her dachshund and eat things where she becomes just as pretentious and smug as Raoul. Alain Cuny is superb as Jeanne’s husband Henri as a newspaper magnet who doesn’t approve of Jeanne’s lifestyle as he is also aloof in the fact that he doesn’t really know her.

Jean-Marc Bory is amazing as Bernard as an archeologist who meets Jeanne when her car breaks down as he would give her a much broader view on the world as he would later be invited to dinner as he acts as an observer who doesn’t really seem pleased about the world of the rich. Finally, there’s Jeanne Moreau in an absolutely tremendous performance as Jeanne Tournier as this woman who is lost in an unhappy marriage as her attempts to find love has her questioning herself and her lifestyle as it’s a performance where Moreau isn’t just the part but also exudes many of the things that a woman is looking for in the world of love.

This story sounds quite intriguing, Steven! Now, as I'm not familiar w/ Louis Malle's work, which film do you suggest I start with? I heard Damage w/ Jeremy Irons is excellent.

Damage is a really good film though it's hard to say where to start with as I've only seen a few films by Malle so far including Murmurs of the Heart. I'll let you know.

Fabulous review of a fabulous movie. So glad to see movies like this getting spotlighted.

@keith71_98-You're welcome. Turner Classic Movies is going to do a thing on Louis Malle later this month as I'm going to see more of his films as he's someone I need to catch up on as I've only seen a number of his films so far.